Tight margins have become a fact of life in the ever-competitive egg market.

Supermarkets are engaged in an aggressive price war, packers – swelled in number by recent new entrants – are fighting to retain contracts, while producers have increased the supply of eggs, both from colony and free-range systems. Everyone is feeling the pinch.

Against this background, Noble Foods has set out to improve efficiency by investing £18m in a new state-of-the-art packing centre at Standlake, Oxfordshire, dedicated to free-range eggs.

“This development is all about driving transport costs down and reducing road miles on traded goods, as well as raising egg grading standards,” says Noble’s farms and contracts director, Tom Willings. “Given that most of our retail customers’ depots are in the South and South East, as are a large proportion of our free-range egg producers, it makes sense to do our packing here too.” 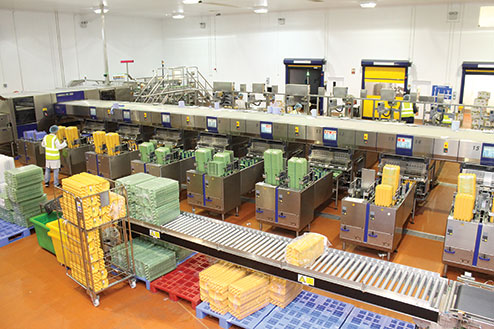 Eggs arrive from store to be checked for cracks and dirt. They are then assigned by weight to the packing lines.

It is estimated that the new facility will reduce food miles by about 2.5m miles a year, making a significant dent in the company’s fuel bill.

Furthermore, the high-quality equipment and attention to detail that has gone into the new packing centre will help reduce the number of cracked eggs and seconds.

“The biggest enemy facing every egg packer is the damaged egg, so whatever we can do to reduce that helps us save money and protect margins throughout the supply chain,” adds site general manager, Dave Gallagher.

Commissioning Standlake started in April and, by August, throughput had reached 30,000 cases a week. Mr Willings estimates the site will hit its target of 40,000 cases a week by the end of the year. At that stage, about half of Noble’s free-range egg packing will be performed at the site.

As a direct consequence, throughput is having to be scaled down at the three other packing centres – North Scarle in Lincolnshire, Thornton in Fife, and Cannock in Staffordshire, with some job losses. But this has been offset by the creation of 140 new jobs at Standlake.

“The new facility gives us much better geographic coverage,” says Mr Willings. “Having four regional centres facilitates a low cost packaging operation with the flexibility to manage peaks and troughs in supply and demand.

“It also gives us scope to shift production as part of our contingency planning so that, if there was ever a major disease outbreak and we faced exclusion zones, we could maintain business continuity. We now have that headroom. But ultimately we aim to have a single designated grading centre for each of our producers.”

So what’s so different about Standlake?

Well, the shape of the building is certainly striking. Some say that it has been designed to look like an egg, though that requires some stretch of the imagination.

Boxed eggs are transferred to the stacking area. Some boxes are loaded to crates by hand.

The 90,000sq ft building, which is actually on the site of a former Noble cage unit, has been designed to include a number of environmental features.

For example, it uses air source heat pumps to draw in colder air from outside during the winter, which is harnessed to reduce refrigeration requirements in the egg storage area.

There are also 168 solar panels on the roof, generating some 50kW of electricity, helping reduce the energy bill. This is supplemented by energy efficient lighting, with movement sensors to ensure lights only go on when needed.

And then there is the rainwater harvesting, with all roof water collected and filtered for washing vehicles, as well as for watering the gardens – once they are planted.

The new facility also incorporates a viewing window above the working area, with the intention of hosting school visits in due course. And the whole building is temperature and humidity controlled, to provide the optimum environment for eggs, people and packaging.

“The packing centre has been set up along the lines of a modern food manufacturing operation, with every attention to cleanliness and efficiency that you’d expect,” says Mr Wood. “It has been purpose built to raise the standard of egg packing.”

This has involved working closely with grading equipment supplier Moba, which has installed one of its new Omnia PX 500 graders – designed in partnership with Noble – and with software provider Ovotrack, to ensure full traceability throughout the system.

“Extensive use of robots has also reduced the number of manual processes and operatives required, significantly increasing efficiency.”

To some extent, the grading process at Standlake is similar to that found in any other packing centre. The eggs arrive from the farms, are checked for weight and quality, and are put into boxes for dispatch to customers.

But of course there is a lot more to it than that.

The storage facility itself is enormous. Pallets, which are collected every other day from the 150 supplying farms, are raised on to a five-tier storage rack, with enough capacity for a day-and-a-half’s supply. The floor has been laser levelled, to ensure zero flex on the racks and so minimise potential egg damage.

The pallets are then selected according to the profile of the eggs on them, to optimise size extraction to meet specific customer orders. “The trick is to select the pallets with the right mix for the customer order we are filling,” says Mr Gallagher.

The next step is to assess quality. The eggs are vacuum lifted into the vision system, which looks for dirt and major cracks. Any dirty eggs are identified as seconds and diverted for processing. Any with major cracks are rejected straight away and broken on site for liquid egg.

From there the eggs enter the crack detector – a system that taps each egg 16 times and produces an individual sound wave – to identify any with micro-cracks. These eggs are also diverted as seconds, destined for sale to a breaker.

According to Mr Gallagher, the quality control is so good that just 0.2% go to the on-site breaker, generating 150 litres of liquid egg a day for Noble, while 2-3% are classed as seconds, well below the industry average.

The remaining eggs then proceed to the weigher, where they are individually assigned by size to one of 18 packing lines, according to the customer orders being processed at the time. Before reaching the packing lines, they are checked for blood spots, to wheedle out any last remaining seconds, and stamped using a Domino printer.

Once packed and labelled, they are then either boxed and sent for stacking on pallets by robots, or transferred along a shuttle to another zone where they are loaded into crates, ready for transfer to the dispatch area.

Meanwhile, all used pallets and trays are returned along a high level conveyor system to be washed and dried.

According to Mr Wood, the whole system has been designed to combine a high degree of automation, while retaining a certain amount of manual involvement. “We are dealing with a huge variety of products with short turnaround times, so we need a degree of flexibility.”

Inevitably there have been a few teething problems throughout the commissioning process, in particular with communication between the different parts of the system. But after five months these have largely been ironed out and the company is confident it is reaching the top of what has been a steep learning curve.

As Noble chairman Peter Dean says: “We’ve come a long way since the days of grading eggs in single file, when our capacity was 15 cases/hour with six people in a candling booth. Standlake represents a major milestone in our business.”