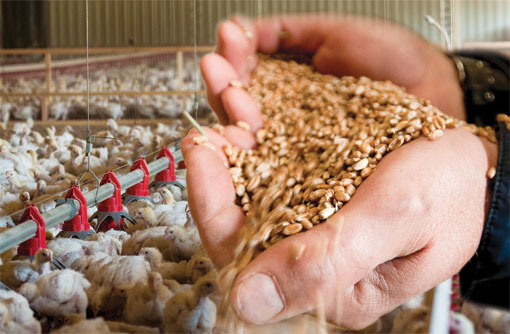 High prices and volatility within the commodity markets means producers and feed nutritionists need to reappraise what it is they want from their rations.

In the 1970s and 1980s, the emphasis was on maximum weight gain, says BOCM PAULS, head of monogastric development, Steve Wilson. But this has now shifted, with producers more interested in diets that deliver the best financial return per bird.

At its most basic level, the cost of feed tends to increase in parallel with any increase in the price of wheat and the energy content of the diet, says Mr Wilson.

But to assess the optimum diet in terms of energy input, it is necessary to factor in the way the bird responds.

“The classic response is where, as we start to increase diet density, we see an increase in bodyweight up to a point, and then it tails off – typically at about 13.6Mj/kg [see graph 1].”

“We also have to be aware that this response can change as the price of wheat changes.” 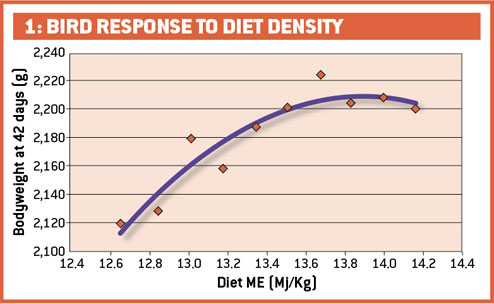 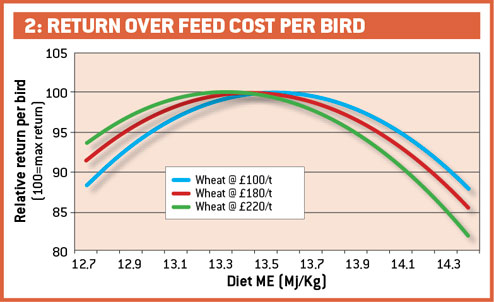 Running the model with wheat at £100/t, £180/t and £220/t, the response line shifts slightly to the left showing that, as the raw material price increases, adjustments to the diet ME are needed to maximise the financial return, [see graph 2].

“It’s not just a simple case of, as wheat price goes up, cut the spec. But we really do need to challenge ourselves in terms of what it is we’re trying to achieve and the type of diet that we’re putting into the birds.”

“Sustainability is one of the big watchwords today. We have a finite amount of growing space and we do need to look at alternatives to the standard cereals and vegetable proteins.

“Most alternative feeds on the market will have some form of restraint imposed on them – and for very good reasons. But I would argue that there are a lot of diets out there with formulation restraints that are based on old views and taboos.”

Alternative cereals include things such as barley, sorghum, oats and triticale, while on the protein side there are dried distillers’ grains with solubles (DDGS), rapemeal and legumes.


One problem feed manufacturers have with many of these is the variability in their quality.

This is particularly the case with wheat DDGS. “While wheat is generally consistent, when it goes through the ethanol process, that can introduce a high degree of variability,” says Mr Wilson. “For example, lysine in DDGS has a 22% coefficient of variation in terms of digestibility, [see table]. That would cause problems if the material was included at a high level.”

But it is possible to gauge the quality of wheat DDGS and, especially, maize DDGS by its colour, with lighter material being more digestible.

“If we could consistently source this type of material, it would give us a higher nutritional value and we could include it at higher levels in feed.”

The other raw material that suffers from past perceptions is rapeseed meal. This is typically restrained in broiler feeds due to issues of palatability, linked with glucosinolates.

But work conducted by the HGCA shows that rapemeal can be included at higher levels in broiler starter diets, with no negative effects on the birds’ growth rates up to 42 days.

“The rapemeal used in this trial was of very good quality,” says Mr Wilson. “If we can get that quality commercially, then we could use rapemeal at higher levels, though it is important to also check the effect on meat texture and taste.”

Varietal differences can also be important. For example, research has been carried out by Nottingham University into the amino acid digestibility of two varieties of field beans. While both were less digestible than HiPro soya, one variety, Tatoo, was not far behind.

“If we could source named varieties, then we could extract greater value out of them,” says Mr Wilson.

The other way of extracting greater value is to look at chemical or physical processing of the raw materials, and additives.

“At this stage the process is quite expensive but, going forward, if the cost can be reduced, set against a high wheat price and high protein price, it might start to become financially viable.”

The main feed additives available include synthetic amino acids, pre-and probiotics, essential oils and enzymes. “Of all those areas it’s enzymes where there has been the greatest technical advancement, to help overcome anti-nutritional factors,” says Mr Wilson.

Trial work in the USA shows that using enzymes on wheat gives only limited improvements in apparent metabolisable energy (AME) due to wheat’s high inherent energy content. “But with barley, with a lower AME, we can get a higher improvement – 16%.”

Mr Wilson adds that, with enzymes, it’s important to use the right one for the particular raw material.

Work on sorghum in Australia shows that xylanase, phytase and protease all increase AME when applied individually. “Protease gives the best results, as the endosperm in sorghum is protected by a protein layer and the protease will break that down.”

But even better results are achieved by using the three enzymes in combination. Enzymes also have a knock-on effect on gut microflora, benefiting gut health and reducing levels of undigested nutrients passing through.