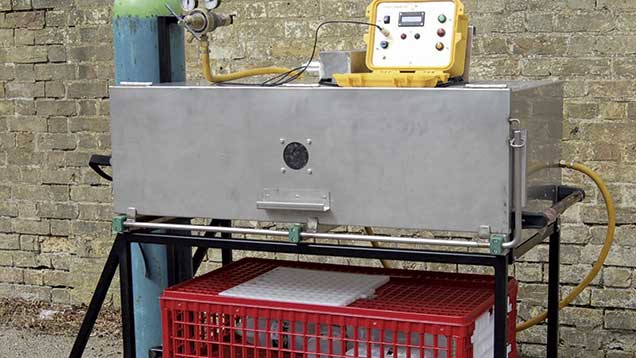 Learning how to humanely slaughter poultry on-farm is a priority for small-scale producer-processors, especially in the run up to Christmas.

Small-scale producers need to know the legal requirements that apply when poultry are:

In particular, producer-processors must spare animals from avoidable pain, distress or suffering during killing and related operations, which must be carried out by persons with the appropriate level of competence.

To achieve this, small-scale producers need to acquaint themselves with the various methods of killing poultry, in accordance with EU regulation (see table below).

The most commonly used permitted methods for routine on-farm slaughter of poultry are hand-held electrical stunners and captive-bolt stunners that are designed for poultry.

Captive-bolts can humanely stun a range of poultry species and are versatile option for multi-species producers. The HSA recommends the use of captive-bolt stunning in particular for turkeys, ducks and geese.

The HSA also teaches the techniques for manual and mechanical cervical dislocation where it is appropriate, for example in emergencies to alleviate suffering.

As an alternative, some equipment is now available for small-scale on-farm killing of poultry using gas mixtures. Once birds are caught and loaded into transport containers on-farm, they need not be directly handled again until they have been killed by the gas.

This offers potential advantages for carcass quality and for bird welfare, reducing any fear and discomfort associated with handling and restraint.

In England, Northern Ireland and Wales it appears to be possible to kill a range of species of poultry elsewhere than a slaughterhouse or knacker’s yard with a mixture of 80% inert gas (for example Argon) and 20% carbon dioxide (with less than 5% oxygen).

In Northern Ireland and Wales it is also possible to use inert gases only. In Scotland, legislation permits gas killing of birds on-farm, but only for end-of-lay and end-of-life breeder hens. The legal and practical aspects currently prevent the use of progressive-fill gas systems.

Those who are interested in using gas for on-farm slaughter of poultry or for killing sick/injured birds should contact their veterinary officer at their local Animal & Plant Health Agency (APHA) office to discuss the legislative and practical details.

Local AHPS offices will also be able to advise on the need for an individual to obtain a slaughter licence to stun and kill poultry, or a certificate of competence.

The Humane Slaughter Association works closely with agricultural colleges to offer one-day courses to discuss the principles of good welfare practices and legal requirements throughout the entire slaughter process.  The next course will take place on 11 February 2015 at Plumpton College, Flimwell, East Sussex.  Phone 01580 879547 or visit www.plumpton.ac.uk