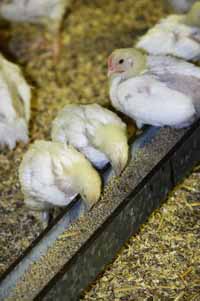 Once the preserve of body builders and athletes, the muscle-building dietary supplement “creatine” has now been adapted for use with broiler chickens, leading to similar benefits.

The additive, CreAMINO, from Evonik Industries, works by plugging a gap in the conversion of nutrients into muscle tissue in birds. It allows cells to receive a consistent supply of energy, so increasing feed conversion and final weight.

Creatine is an organic acid produced in humans and animals by the liver and kidneys. Supplementary sources can also come from the consumption of meat or other animal proteins, which are high in creatine.

“Today, broilers are mostly vegetarian in Europe,” says product manager for CreAMINO at Evonik Industries, Ricardo Gobbi. “There are small amounts of animal proteins in feed, but the creatine is not stable so there is degradation. Animals such as fast-growing broilers are not able to produce enough creatine.”

Even though broilers may be deficient in creatine, this doesn’t lead to them getting sick or dying. “You can’t look at a broiler and see that it is deficient in creatine,” says Mr Gobbi. “But it has a very important function at the cellular level, replacing the adenosine diphosphate (ATP), which is produced by burning nutrients and is used for growth.

“Creatine is a buffer at the cellular level to keep ATP levels stable as the cell cannot produce its own ATP,” he explains.

Results of trials conducted by Evonik in Germany and Brazil found that, by adding 600g of CreAMINO to 1 tonne of feed, they could improve feed conversion by 0.06% to around 1.75kg/kg for females and 1.69kg/kg for males, boosting the final size of boilers by up to 50g.

Mr Gobbi says they noticed an overall 3% increase in animal performance during the experiments, based on controls where no creatine was present in feed.

Approval has been given for CreAMINO’s use as a feed additive in Europe, Chile, Brazil and Thailand, and it has been offered to some existing customers of Evonik. But it was only launched offically at EuroTier in November.

One of the biggest buzz words in poultry feed at the moment is phytase, an enzyme which, when consumed by poultry, benefits birds by allowing them to convert feed more efficiently, while creating drier litter and lower ammonia levels in the air.

Feeding phytase was lauded at both the Eurotier show in Hannover, Germany in November 2010, and earlier at the SPACE livestock show in Rennes, France in early September.

At SPACE, DSM nutrition’s Ronozyme-ProAct was awarded a Innov’Space award, a significant achievement considering it was only approved for use in the EU in April 2010. Prior to this it had been widely used in Brazil and Turkey following launches in Asia, the Pacific and Latin America.

“Customers can use less crude protein or less high quality grains to formulate, while optimising the amino acid profile required to maintain or improve animal performance.

“By increasing the digestibility of proteins, it reduces emissions of ammonia and other nitrogen compounds into the environment, thereby lessening the environmental impact of animal production.”

Ms Beaulieu claims poultry producers can save €2-6/t of chicken feed by using the additive.