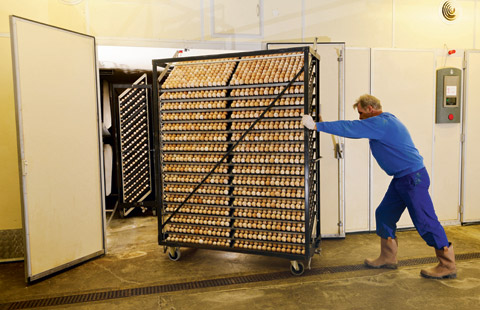 Optimising layer and broiler performance depends on getting chicks off to the best possible start, as Poultry World discovers

Chick quality in the UK can be very variable, but that needn’t be the case given the correct attention to detail and the adoption of new techniques, according to Helen Houghton of Merial Animal Health.

“The quality of the chick is dependent upon the health and management of the parent breeder flock, the number of hatching eggs available, the incubation of the embryo and the management of the vital first days of life,” she says.

Good quality vaccination programmes are also needed to produce high levels of maternally-derived antibodies that can be passed on to the chicks to protect them in the first weeks of life.

But it is in the hatchery that perhaps the greatest differences can be made, with incubation having a major impact on chick quality and a chick’s immune system.

Uniform temperatures are vital, and this can be facilitated by setting eggs of similar size in one incubator, says Mrs Houghton.

“Overheating embryos during incubation produces chicks that hatch out too early, with low relative body organ weights. The Bursa of Fabricius, which is the key organ for the active immune system, can be as much as 20% under-developed.

“Such chicks will always be more susceptible to disease and less able to respond to preventative measures such as vaccination.”

Mrs Houghton is also convinced of the merits of in ovo vaccination, as used widely in the USA and which is starting to find favour in UK and EU hatcheries as more vaccines are developed.

In ovo delivery systems are used for mass vaccination of embryos at 18 days of incubation, enabling earlier protection against the diseases a chick will encounter on farm, such as Marek’s disease.

“This system also reduces chick processing time in the hatchery, compared with day-old subcutaneous vaccination, reducing stress and allowing chicks to arrive on farm earlier and start feeding and drinking. This reduces the potential for chick dehydration.”

Mrs Houghton is also excited by another potential use for in ovo technology, as a means of delivering probiotics before hatching. This may enable a chick’s gut to mature earlier and help overall development, especially chicks from younger breeding flocks with reduced yolk size.

This could also result in chicks being hatched with an established gut flora which is better able to defend itself against colonisation by pathogens such as salmonella, E coli and campylobacter.

Post-hatch, management of the first five days of life is critical, while the chick’s gut, immune systems and thermoregulatory systems develop.

In The Netherlands, for example, chicks are given immediate access to feed and water, which helps avoid dehydration if there is a long time delay before arriving on farm. The physical presence of feed in the day-old chick can also stimulate maturation of the gut.

“Studies have shown that day-old broiler chicks having immediate access to feed and water have produced birds that reach slaughter weight a day earlier when compared with conventional farming systems,” says Mrs Houghton.

“Early feeding via brooding at the hatchery, hatching directly on farm or via hatchling diets placed with the chicks during transport, allows the period between hatching and first feeding and drinking to be reduced.”

Mrs Houghton notes that, as day-old chicks are unable to control their body temperatures, correct brooding temperatures are essential to maintaining chick health. “Placing chicks on to cold concrete floors or moving them on lorries with poor temperature control will slow or even halt growth altogether.”

Under-floor heating systems, with good ventilation not affecting temperatures at chick height, are recommended. “But problems can arise when birds are older and producing more body heat, as floors may not be cooled quickly enough resulting in hot birds that do not feed or grow.”

* This report is taken from Helen Houghton’s recent Nuffield Farming Scholarship award on Disease prevention in the chick embryo and young chick, sponsored by the British Egg Marketing Board Trust. Helen travelled to the USA, The Netherlands, China and India in the course of her study.