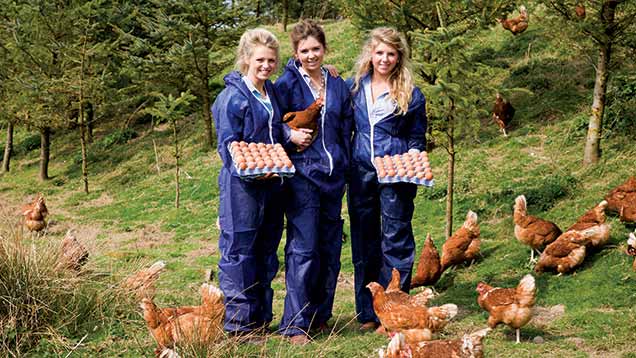 When it comes to selling eggs, the Campbells at Glenrath in Scotland know a thing or two.

The family has been in the business for 50 years and is now the country’s largest supplier of free-range table eggs, as well as a significant producer of colony, barn and organic eggs.

It was 50 years ago that Cathy Campbell started selling eggs door-to-door, supplementing the income of the family farm. It was so successful that her husband, John, got involved and they became a supplier to Spar. A contract with Tesco followed shortly, and the business has expanded ever since.

“As a company we aren’t afraid of challenges,” says son Ian Campbell, the current managing director. “In business if you’re not moving forward, you’re going backwards.”

To prove the point, the business has recently invested in a £6m egg processing and pasteurisation plant at its Millennium Farm in the Scottish borders.

And, having initially spent over £40m on colony cage units, in time for the ban on conventional cages in 2012, Glenrath is now ripping out some of the facilities and converting them back to barns, in anticipation of growth in this niche sector of the market.

Innovation and flexibility are clearly important. But if there is one thing that underpins the business, it is product quality, says Ian, so all eggs are produced to the BEIC Lion assurance standard.

Management and nutrition strategies are employed to limit egg size. “If you control egg size early on, then you prevent eggs getting too big later on. We aim for an average egg weight of 64g at the end of lay,” says Ian.

This is particularly important for the mixed weight packs, where there is a minimum weight of 805g for the 15 eggs. “If eggs are bigger, we are giving away extra weight for free – which doesn’t make business sense.”

Quality at the end of lay is also important, so calcium levels are increased to improve shell strength. “It’s fine to produce eggs, but you need to be able to sell them.”

There are other economic considerations, too. If eggs break in the packing station, other eggs become unsalable and packaging can also be ruined. “The line may have to be stopped and cleaned, costing us time and money,” Ian points out.

This is where the new Moba 500 grading machine plays a role, removing eggs with hairline cracks and preventing breakages further down the line. Glenrath also uses robots to put eggs into the packs, further reducing wastage.

Preventing damage to eggs before they get to the packing station is also a priority. “We have reduced cracks by 4% by updating conveyer belts in the houses, and other changes in the free-range units,” he says. When they are grading up to two million eggs a day, this makes a big difference to productivity.

The change to enriched colony systems was also a challenge in terms of downgrades, with the mats causing more dirty eggs. Glenrath’s own standard is not to exceed 5% seconds over the whole cycle.

Packaging also plays an important role in delivering quality eggs to customers. To this end Glenrath has recently introduced plastic packs to several of their ranges. These are made of recycled plastic bottles, which use less energy in their production compared with cardboard packs.

There has been good customer feedback, with significantly less wastage during transport and in-store. The packs come with a safety catch and their transparent nature allows people to see the colour and quality of the eggs they are buying. “It’s a win-win for all involved,” says Ian’s daughter Amy, who is also the company’s marketing manager.  “We are able to show off our product, save money and reduce environmental impact.”

The initial idea came while looking for a solution for packaging the very large eggs, which have thinner shells. The recycled plastic packs can be made with bigger cells and are proving to be more secure.

The Kitty Campbell brand has been using the packs for about a year and the business has just finished a successful trial with a supermarket’s own label eggs.

And recycled packaging isn’t the company’s only green initiative. Last year the Campbells planted 20,000 trees to help maintain Scotland’s woodland as well as creating a better environment for their free-range hens.

Glenrath Farms in a nutshell

Glenrath Farms is the largest supplier of free-range table eggs in the UK, which makes up 45% of production and continues to expand with demand. It is also one of the top 10 poultry companies in the UK, with an annual turnover of £56m, selling around 10 million eggs a week. The company’s Kitty Campbell Free Range Eggs are sold in Tesco stores nationally, as well as Asda and Sainsbury’s in Scotland.

Glenrath has 1.2 million laying hens, most of which are kept within 20 miles of head office. Contract farmers supply a further 10% of the eggs it sells. Rearing has been part of the enterprise from the start, with additional pullet requirements bought in. The family own and farm a total of 15,000 acres and employ 230 staff.

In addition to the Kitty Campbell brand, the company markets Cage-free, Big and Scottish and Glenrath brands in their native Scotland. However, a significant portion of their business in producing supermarket’s own brand eggs.

There are now three generations of the Campbell family working throughout this multi-million pound business. However, as farmers they haven’t lost their roots, keeping 10,000 breeding ewes, plus 500 Limousin and Charolais suckler cows. These are sold for both meat and as breeding stock. Their enthusiasm for showing their prize animals is evident from the trophies on display in the boardroom.