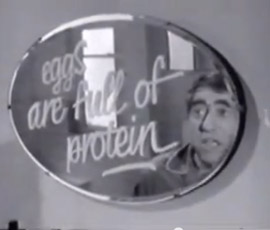 This year British Egg Week will give the classic advertising slogan “Go to work on an egg” a modern-day makeover.

In 2012 the campaign focus was to get more people eating eggs as part of a main meal. This year British Egg Week will run from 30 September to 6 October and will highlight the value of eating an egg for breakfast.

“Go to work on an egg” was the slogan for a series of TV adverts in the 1950s and 1960s that featured comedian Tony Hancock.

The 2013 revamp will include a nationwide tour of schools with the Kid’s Cookery School Charity, as well as a series of egg-based recipes “designed to turn novice cooks into master chefs in just seven days”.

Andrew Jorêt, chairman of the British Egg Industry Council, said it was looking forward to introducing the “Go to work on an egg” ethos to a new generation. “Tony Hancock was right – everyone can benefit from going to work on an egg,” he said.

“Nutrition experts are now spreading the word about the health benefits of eggs, but we know that many people still lack the basic skills to cook them, which is a clear barrier to increasing consumption.

“Eggs are a wonderfully versatile food that can easily transform a few ingredients into a meal in minutes, so they are perfectly suited to novice cooks looking for healthy fast foods they can make themselves.”

Time to get out of the egg boredom zone