The success of any vaccination in preventing poultry disease is dependent on correct storage and handling, as well as skillful administration.

It’s something that Gerard Bailey-Watts of MSD Animal Health knows all too well. Part of his role is training farmers to correctly administer vaccination programmes – mistakes not only waste valuable product, but can also result in a flock not being entirely protected.

Vaccination is about prevention, rather than treatment, of disease and is not generally deemed to be effective in the face of disease challenge, he told a recent meeting of the Yorkshire Egg Producers Discussion Group.

Live vaccines work by attaching a virus to target cells within the host, stimulating those cells to produce identical bacteria or virus particles, he explained. This triggers the bird’s immune response, which in turn provides protection in the event of a disease challenge.

“When using live vaccines, the aim is to ensure that the vaccine virus or bacteria is alive when it reaches the bird,” said Mr Bailey-Watts. “The ability of a vaccine to protect birds will be negatively impacted as a result of incorrect storage, reconstitution and administration.”

Many large units store live vaccines in designated refrigerators and, ideally, these should be fitted with an alarm in case of failure, he said. Storage at excessively high and sub-zero temperatures can be detrimental to the efficacy of both live and inactivated vaccines.

If glass vials of freeze-dried vaccine reach freezing point, the rubber stoppers may contract, thus allowing moist air into the vial and the reconstitution process will begin ahead of intended time. When inactivated vaccines freeze, the adjuvant may break up and the emulsion status of the product will be lost.

Live vaccines are also susceptible to damage from ultraviolet light, so they should not be left in direct sunlight, while inactivated vaccines should be brought to room temperature before use, which makes them more effective, said Mr Bailey-Watts.

“Experience from the field suggests that adverse reactions may result from the administration of inactivated vaccine where it has not been pre-warmed,” he added.

A recent development in poultry vaccine manufacture is the introduction of so-called “sphereon” technology. Vaccines in this form come in sealed, lightweight aluminium cups, rather than the standard glass vials. They are dissolvable, so it is not necessary to open these containers underwater – the idea being to make life easier for farmers.

When vaccinating via drinkers, the aim is to ensure that each bird drinks an equal volume of treated water, in order to receive a single full dose of vaccine. This can prove difficult – it is important that manufacturers’ guidelines are followed, said Mr Bailey-Watts.

The first step is to remove all sanitisers, including ammonia compounds, as well as acidifiers such as citric acids from the water system. Lines should be flushed with a product designed to remove detergents, minerals, biofilm, litter, feed and faeces, as these can harbour materials with the potential to destroy a live vaccine, even at very low levels. For the same reason, filters should either be removed or bypassed.

Also recommended is testing water pH level, with any imbalance rectified. A figure of less than 7.5 is considered too high and 6.0 is too low. Water pH can be determined using a simple testing strip, widely available for use on swimming pools. Producers whose units have an oxygenating system should turn the machines off for at least two days before the birds are due to be vaccinated.

If the water source smells or tastes of chlorine, it is probable that levels will adversely affect the vaccine. “Purpose-built” stabilisers are designed to neutralise the chlorine within mains drinking water. These also contain a blue dye, which allows the producer to track the progress of the vaccine solution through the system and along drinker lines.

Vaccine vials are best handled in a clean environment. Glass vials should be opened underwater by an operator with soap-free hands or, preferably, wearing disposable gloves. When reconstituting vaccines it is better to use distilled water, or mains water that has been stabilised to neutralise chlorine.

All equipment, including buckets, jugs and whisks should be thoroughly cleaned before use, and it should be remembered that traces of detergent or disinfectant can harm vaccinal viruses/bacteria.

Textbook vaccination involves raising drinker lines (or dimming lights), to ensure that no birds drink until the lines have been primed with vaccine solution from the front to the far end of the poultry house.

“Withdrawal of water for a brief time prior to vaccination may encourage birds to drink within the targeted ‘drink-up’ time,” advised Mr Bailey-Watts. “But you must be careful not to ‘thirst’ the birds for too long, as the subsequent pressure on drinkers may result in rapid uptake of the vaccine solution and uneven ingestion, which could lead to post-vaccinal reactions.”

So the ideal is to give briefly-thirsted birds access to the drinker lines at the same time, to maximize uptake across the flock.

Drawing off unvaccinated water is essential, as the protrusion of nipples above the bottom of many drinker lines means that birds cannot, as is commonly thought, drink the lines dry.

Post-vaccination, as much as 10% of the water containing the vaccine can linger in so-called “dead” spaces in some types of drinker system. These can include the area under the outlet pipe of some header tanks, as well as some water system manifolds. This water should be removed, once the programme has finished. 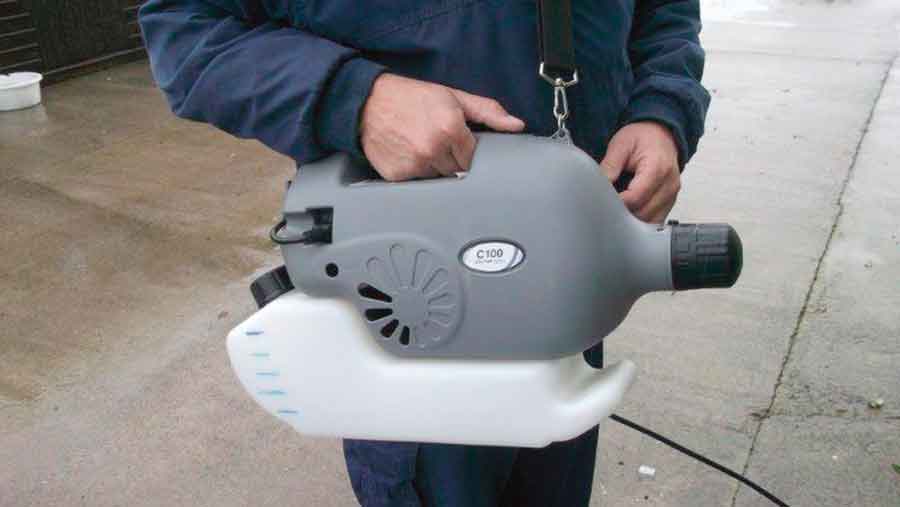 Mr Bailey-Watts explained that the type of sprayer used determines the size of droplets of vaccine solution delivered to the birds and the extent to which these droplets penetrate a bird’s respiratory system. Smaller droplets, in theory, make their way further down into the system.

Droplets measuring in excess of 100 microns in diameter are often described as coarse, with fewer than 100 microns described as fine, he said. The degree to which a knapsack sprayer is pumped up and the type of nozzle fitted will influence droplet size.

“The aim when spray vaccinating is to deliver droplets into the eyes, nares and respiratory tract. Between leaving the sprayer and reaching the bird, droplets may be lost due to settlement on litter and equipment, evaporation and drift (from the poultry house via vents).”

Birds should be settled before vaccination begins. All too often a spray vaccination audit will reveal that, while the operator is spraying some of the birds at one end of a house, light leakage has led to the majority moving to the opposite end.

Turning lights off prior to vaccination will help and, although a head torch with a red bulb may be useful, operators should be aware of the risk of panicking the birds when entering the building.

Meanwhile, evaporation and drift losses can be minimised by turning off the fans, preventing vaccinated spray from being drawn out of the shed. In open houses, curtains should be closed.

The guidelines relating to drinking water vaccination can also be applied to the reconstitution of vaccines developed for spraying, he said. Vaccine volumes will vary on the type of housing system – multi-tier may require more solution, for example.

Feeder tracks and drinker lines can be used as guides when using devices such as the Ulvafan sprayer, he added.

“When using an Ulvafan, the aim is to gently move a rectangle of spray, from which droplets fall onto the birds around the shed. The flow of air to the fan must not be obstructed and care should be taken to avoid positioning operators so close to walls as to waste vaccine on that wall.”