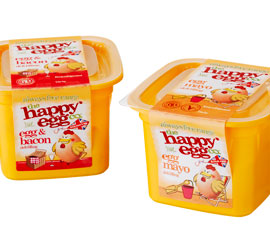 The Happy Egg Company has received a Good Egg award for the second year running.

Compassion in World Farming (CIWF) gave the award in recognition of the packer’s commitment to high animal welfare, specifically for the launch of new products – Happy Egg quiche, scotch egg and sandwich fillers.

The accolade was given to the company at the Good Farm Animal Welfare Awards, hosted by chef and broadcaster Valentine Warner, at the end of September.

More than 50 awards were presented across five categories at the event, which celebrates high-welfare farming across meat, eggs and dairy.

Good Egg awards were also presented to Premier Foods, KFC and MacDonald hotels and resorts in recognition of their commitment to cage-free eggs, as well as smaller retail newcomer Good Food Nation and The Hummingbird Bakery.

A Good Chicken award was given to Jamie Oliver, for his range of higher welfare chicken products developed with Moy Park.

Steve McIvor, director of food business at CIWF, said the awards were a celebration and recognition of the “huge difference” that the winners were making to the lives of thousands of farm animals.