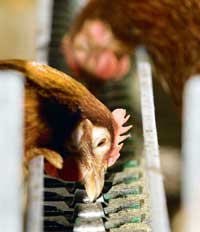 Fishmeal has no part to play in feeding organic poultry, claims one of the UK’s leading producers of organic rations.

Ian Proctor, managing director of Hi-Peak Feeds, has spoken out against new EU rules that will allow the use of fishmeal in rations on a long-term basis.

He maintains that the use of fishmeal will undermine the integrity and value of the organic sector, and has written to DEFRA minister Hilary Benn calling for a complete ban on fishmeal in organics.

“At a time when industrial fishing is the greatest culprit for declining fish populations, organics should distance itself from such unsustainable and irresponsible fishing techniques,” said Mr Proctor.

“We have to question the ethical appropriateness of organics going down this road. The sector should resist these moves and seek the removal of fishmeal altogether from organic feeds,” he said.

Since the start of the year, Brussels has classified fishmeal as a ‘non-agricultural’ ingredient, like minerals. This means it can be used freely in organic feeds, even in rations that claim to be made from 100% organic ingredients.

“This makes a mockery of the ruling that states a minimum 95% must be achieved as from next year,” continued Mr Proctor.

At the Soil Association, policy director Peter Melchett agreed with Mr Proctor that there were significant environmental issues over fishmeal and how it was sourced.

“Hi Peak has identified a serious issue, but the Soil Association will not be seeking a change in EU rules,” he said. “In quite a few rations, especially for poultry, fishmeal can play a significant part in getting the right nutritional balance.” he added.

EU regulations required that fish meal in organic feeds should be from a sustainable source, he pointed out, and the policy at the Soil Association was that members could not use ‘industrial’ fish meal.

The Association supported the use of “Offcut” fish meal, which was made from by-products of commercial fishing for human consumption, he explained. Over the next few years they would be moving towards fishmeal from Marine Stewardship Council (MSC) accredited fisheries.

“MSC is the gold standard for commercial fishing,” said Mr Melchett. “If by using fishmeal from these sources we can make them more economically viable, we can do some positive good for the environment, and it could prove a powerful weapon against overfishing.”

At Organic Farmers and Growers, Richard Jacobs agreed that sustainability was a critical part of the organic agenda, and that standards were rigorously enforced.

He admitted that he had members who wanted to use fishmeal, and others who felt it was not appropriate.

“But we know that amino acid balance is critical in poultry for the right growth and behaviour, with strong welfare implications.”

Mr Jacobs also wanted to see a programme of research into making better use of UK-sourced proteins such as beans and lupins.

Martin Humphrey at Humphrey Feeds, a leading independent supplier of poultry rations, said that fishmeal had an indispensible role to play in organic poultry feeds. The fishmeal they used was supplied from an accredited sustainable source, he added.

Mr Humphrey believed there was a real need to allow fishmeal to be used as an ingredient for pig and poultry feeds in general feed mills.

At present, any mill involved in preparing ruminant feed is not allowed to handle fish meal for any purpose.