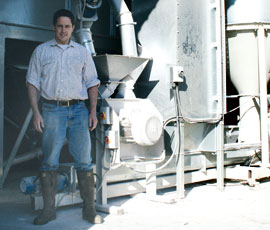 This primarily arable farm – which grows oilseed rape, barley, malting barley and wheat – decided to replace potatoes with poultry, but it soon became obvious that there was an opportunity to use home-grown grain through a home milling set-up.

Potato storage sheds are now used to carry the annual tonnage of wheat and have a capacity to store up to 1000t of grain. Around 900t a year of poultry feed is produced through the mill which uses the entire farm’s production of 500-600t of wheat and incorporates bought-in ingredients including hi-pro soya, oil, limestone and minerals.

“When we looked at using our own wheat it soon became clear it would make more sense economically to mill the ration on the farm rather than send the wheat away to be made into poultry feed,” says Mr Penty.

“We spent around £80,000 in total, but expect a pay-back time within three years. While that’s one of the most attractive aspects of this investment, we’ve been impressed by how easy it is to operate,” says Mr Penty, who is producing 17t of poultry feed a week from two mixing sessions.

The mixer itself, which can produce 2.5t per mix, is situated on four weigh-cells and initially weighs-in 70% of the wheat about to be milled. Once 70% of the wheat has been processed the mill automatically begins introducing the 2% mineral part of the ration, followed by the 15% hi-pro soya and then 10% limestone. The oil is added as a final ingredient.

Once the mixing process is complete the ration is discharged into the two feed silos ready for feeding. Output is around 2t/hour.

“We set up the mill close to the main poultry shed so that the ration could be easily augured without the need to blow it into trailers and transported.”

Mr Penty says there has been no loss of production or impact on egg quality or egg size since switching to a home-mixed ration.

“We know exactly what’s going into the diet and feel confident about what we’re feeding. The ration is formulated by an independent nutritionist who oversees the diet’s constituents and the performance it’s achieving – and there’s enough calcium in the limestone to ensure we don’t undermine shell quality.

“We adjust the soya and wheat percentages so we have control over the size of eggs we’re producing. We have a range of three or four different diets which allow us to vary the protein and energy content of the mix. We can do this very subtly – almost on a daily basis if we want to – so that the birds aren’t aware of any change to their diet. It means we can keep the egg size exactly where we want it to be.”

The flock aims to produce medium-sized eggs to maximise market returns and exploit production per bird. All eggs are sold to Noble Foods.

This year has also seen bird weighing machines installed inside the shed which are providing bird-weight data gleaned from up to 1000 bird weights per day per machine. “They’ve made a big difference; we’re now fully aware of how birds are coping in terms of body condition and weight loss.

“I can closely monitor feed consumption and compare that with bird weights, egg weights and egg production. It’s important that we can draw these correlations when we’re producing our own rations,” says Mr Penty.

The shed, which is split into two, measures 130m x 20m, and holds 20,000 Lohman Brown birds. The birds move out into the paddock – which is shared with cattle – across a 2m concrete apron along the entire length of the shed. Current production is 90% at 44-45 weeks.

“I’d definitely advise others in a similar position to ourselves to look at the benefits of home-mixing. Running costs have been negligible and providing you keep an eye on the unit’s basic lubrication, the maintenance is easy,” says Mr Penty.