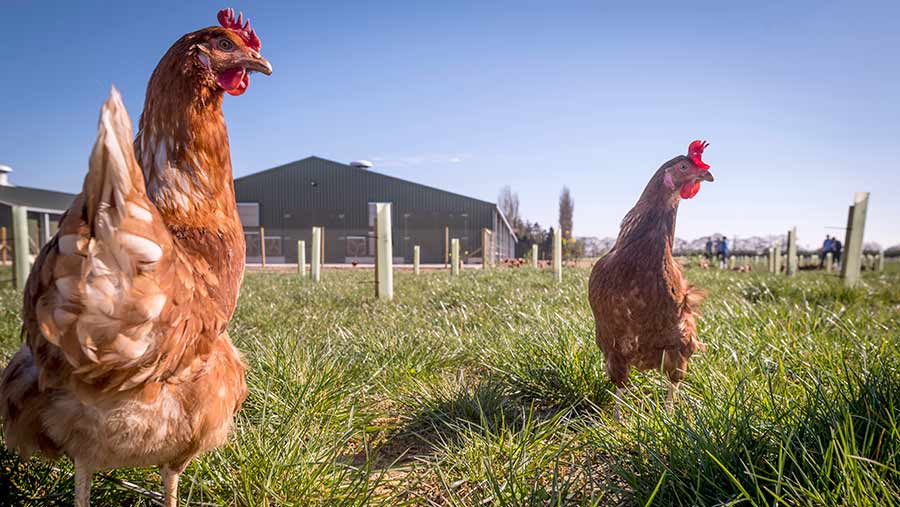 If there is one criticism that can fairly be levelled at the commercial poultry sector in the UK, it is that engagement with its ultimate customer, the British public, can be a bit lacking.

Both poultry meat and egg producers have historically shied away from showing off their farms, for a range of reasons, not least because biosecurity is more important in these systems than perhaps any other.

But there are indications that this is changing, slowly, with more producers accepting the need to show the public how chicken and eggs are produced and assuage fears about intensive livestock production.

See also: How to control smells on poultry farms

Sally Farm is a good example. Late last year it hosted an open day for farmers interested in new kit, and then a weekend event geared towards local residents.

Countryfile’s Adam Henson was there to oversee proceedings, as was Lucy Gavaghan, whose petition in 2016 convinced the retailers in the UK to stop selling colony egg by 2025. 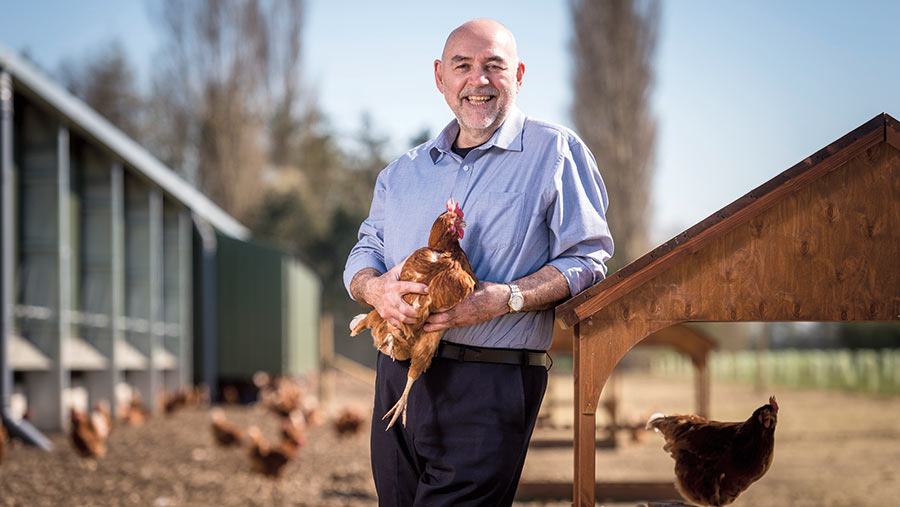 The owner of the farm, Leon Furlong, says the open day was just the beginning, and that there are big plans afoot for the site.

The birds were placed shortly after the open day and are now at about 35 weeks, and remain above 95% of peak lay. The farm currently comprises four 16,000-bird sheds connected by a central anteroom where eggs are collected.

Those wishing to enter the anteroom or the interior of the sheds must shower in – an unusual feature on a free-range egg farm, but one put in place to aid biosecurity.

This first unit is just the beginning for the 240ha farm, which is two miles east of the A1, just north of York.

“In a sense we built this one to make sure we were happy with the design, and to know exactly where we want to go,” says Dr Furlong, who is also managing director of Vencomatic in the UK. “But this farm will finish up as a massive research centre for poultry.”

That will begin with the construction of the next set of four sheds, which will have a larger central area where people can visit without being in contact with the birds, meaning they can visit without showering in and changing clothes.

“There will be a separate entrance, a walkway down the side of the sheds and a raised section where people will be able to look down at the chickens,” he says, adding that this facility will be called the Northern Poultry Campus when complete.

Dr Furlong has engaged with nearby Askham Bryan College, which is hoping to develop its agricultural apprenticeships offering, and there is even talk of having a café on site open to the public.

“This entire farm will finish up as five of these units, the biggest one will be the campus, the rest will be set within a nature reserve,” Dr Furlong says. 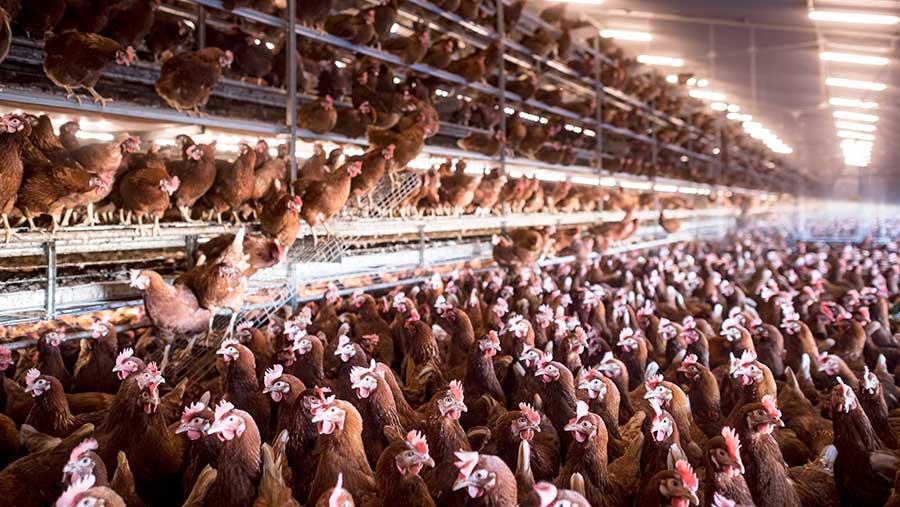 The farms themselves are rented out to Wot-An-Egg, which takes care of day-to-day management and markets the eggs to Noble Foods under the Happy Egg Company brand.

Much of the equipment fitted out in the sheds has come from Vencomatic itself, including its Veranda Gallery, which the firm says is designed to afford farmers visibility of the entire system, including the egg belt.

It has been built with the aim of reducing keel bone fractures, with a PhD student spending three years on trials to determine the current configuration.

“Basically, the position of the perches affords hens access to feed, water and nest systems on three levels so the birds have a large area that they can easily get to,” says Dr Furlong. 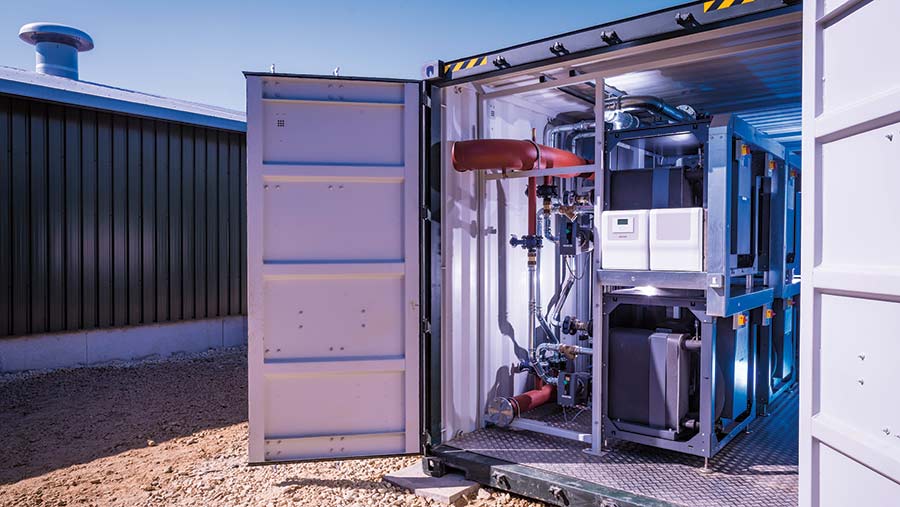 Another feature uncommon in laying hen farms is that one of the four sheds on the site is heated by a ground-source heat pump system from Alt-Energi, combined with a Vencomatic Clima Unit heat exchanger.

Most free-range farms in the UK do not heat sheds, but some are beginning to see advantages to keeping internal temperatures constant and at a positive pressure, helping to expel stale air.

Dr Furlong says the site with the heat exchanger installed will form part of a trial, with the performance compared with the remaining three units which are unheated at present. Plans are in place to compare the ammonia and dust levels from the system, which cleans air before it is expelled from the inside of the shed.

Alt-Energi’s Phil Mole explains that pipes buried under the birds’ range are warmed by latent heat in the surrounding soil before returning to heat fresh air brought into the system, which is then pumped into the sheds. 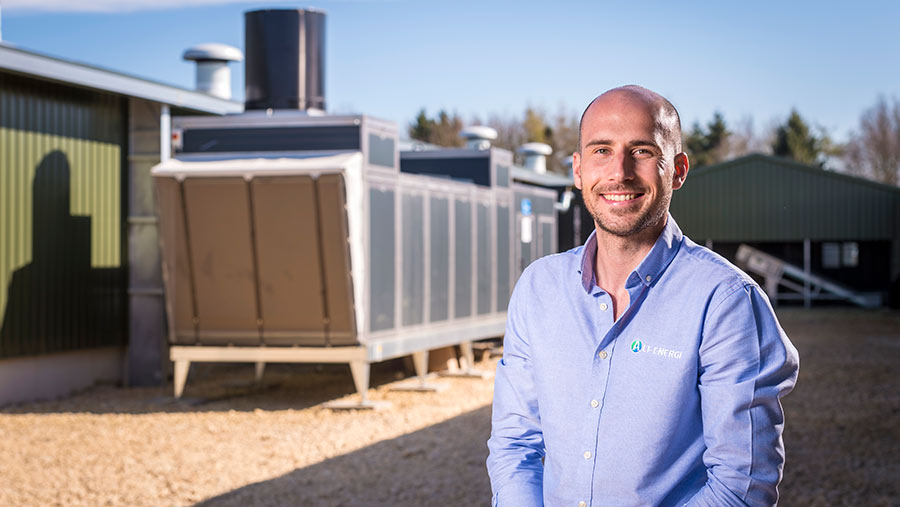 “We achieve an 80% recovery from the Clima Unit, then the ground source heat pumps heat it further,” Mr Mole explains.

“On a hot day you can also supply cooled air to the shed by reversing the heat exchange process within our ground source heat pump, keeping temperatures constant.”

Sally Farm’s installation is currently powered by mains electricity, but a new 250kW solar array will be installed to account for most of the system’s needs.

When in place, Mr Mole projects an RHI (Renewable Heat Incentive) income of just over £40,000, a saving of £6,000 based on reduced feed consumption because of the warmth and an electricity saving of just shy of £14,000 against an operating cost of £15,000 a year.

Based on those figures, he projects a payback time of just over seven years, adding that Alt-Energi has an arrangement with Peregrine Finance, which will offer a 10-year unsecured loan for the set-up.

“Farmers will be able to retain control of all their ventilation and on top of that make money out of the fact that chickens will be healthier, with better feather cover, produce eggs better and eat less food,” Dr Furlong adds. 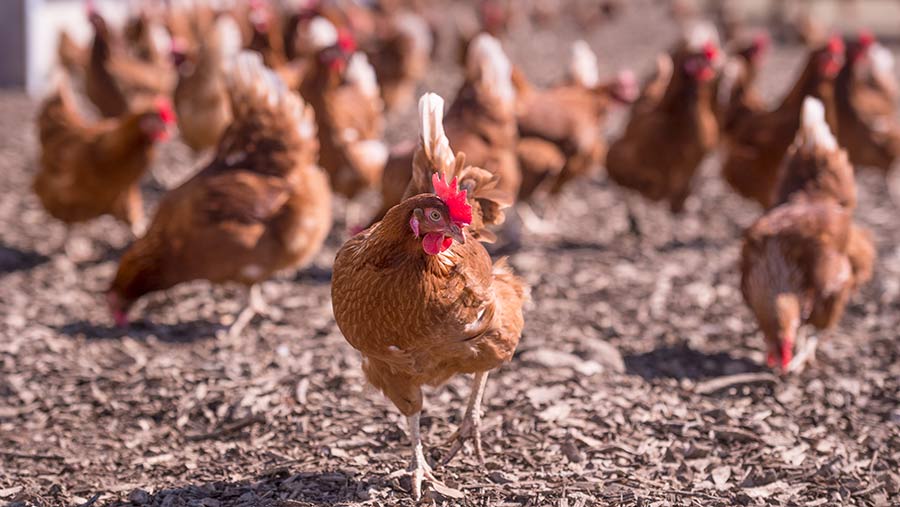 Red mite is a pervasive pest that feeds on hens’ blood at night, and severe infestations will cause weight loss, lower egg production and reduced egg quality.

Infestations are also linked to higher stress and pecking as well as additional mortality, and contribute to the spread of other pathogens in sheds.

A hole in the perch provides an attractive place for red mite to rest, and once they are inside the number present can be counted.

The perch links to a data management system which records ambient temperature and predicts if populations are in growth or decline.

Also featured is the MitePerch, which runs a low electric current (DC) through wires underneath mushroom-shaped ribbed perches.

Vencomatic says the electricity, which the birds cannot make contact with, kills red mite as they move up in the night to feed, while Dr Furlong adds that the silicone ridging on the perch aids grip for young birds.

“When you put young pullets into a multi-tier nest system, if you turn the lights off and stand there for an hour, you will hear a lot them falling off the perches – they don’t do that here. That also helps reduce keel bone fractures.”

With a few notable exceptions, poultry producers have not hosted the general public on their farms, but Open Farm Sunday presents an opportunity to do so.

This year it takes place on 9 June, and farmers interested in showing off their holding to the public can access advice and support from Leaf, the organising charity, making the endeavour potentially less daunting.

A spokesman for the charity says that hosting people on your farm need not be a large event. “Every farmer has a story; it can be a small event such as a farm walk for 20, which allows the farmer to have more control,” he explains.