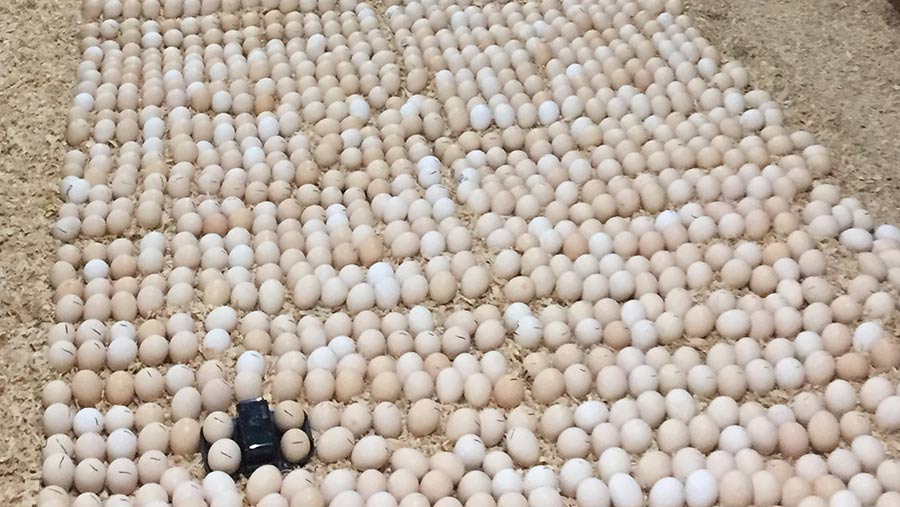 He recently switched to 100% on-farm hatching, from Belgian firm NestBorn, which means fertilised eggs are now delivered to the farm rather than day-old chicks at the beginning of a flock.

See also: How to manage staff exposure to poultry dust 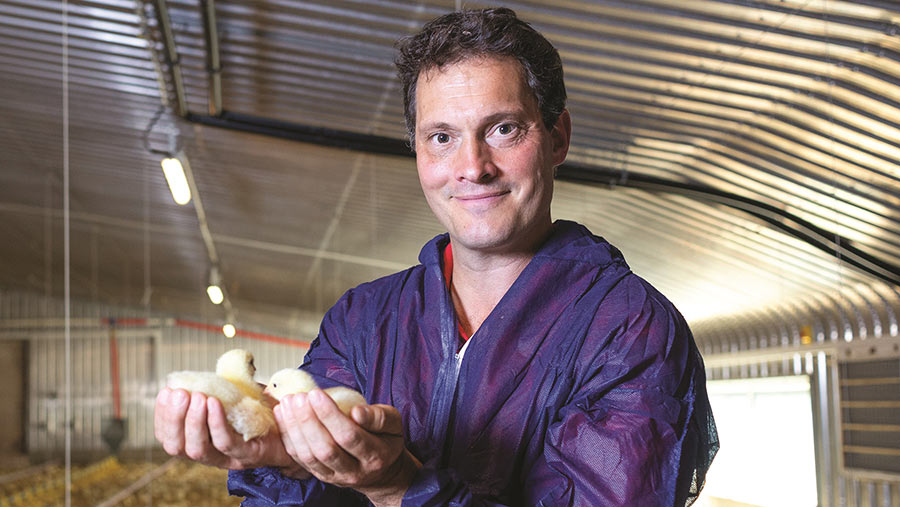 A downside is that heating costs have increased to allow the birds to incubate and hatch. But Mr Wornham says the switch appears to deliver a lower stress environment for birds, when compared with taking delivery of day-old chicks.

There are also labour savings, as tipping chicks in the traditional way requires a team of people.

Some key performance metrics, such as weight at 21 days, have seen encouraging improvement too (see table).

Mortality is just 2% and bird performance is good, according to Mr Wornham. “The system seemed to work well for me, and birds had access to feed as soon as they hatched.”

Mr Wornham says he also believes chick stress levels are lower among the flock. “The birds are so much calmer – there is no noise, just an inquisitive cheeping.”

He added there could be another benefit in a lower carbon footprint for the layer sector, as lorries can carry far more eggs than they can day-old chicks.

How does the new system differ?

Fertilised eggs spend their first 18 days in incubators as they did before the system was introduced, according to NestBorn general manager Erik Hoeven.

Following this, the trays are backfilled with fertile eggs, so no space in machines is wasted.

How the system hatches birds on-farm

The plan is to improve the candling process and hatch rates, but it’s currently at between 96% and 96.5% on farm in the UK.

Overall, the new system is producing about 1% more chicks. “The difference is they have got time to come out when they want to come out; you’re not set on a deadline,” Mr Hoeven says.

For the farmer, shed preparation is much the same as when day-old chicks arrive. The house is pre-heated for a few days to get it up to temperature and litter is laid – a little thicker where the eggs are placed.

Feeders and drinkers are lifted to allow the battery-driven NestBorn machine access. The trolleys carrying the 18-day incubated eggs on the setter trays enter the building, and the machine places 300 eggs at a time gently into their “nest”.

There is also an option to make use of the online NestBorn monitoring platform.

Eight wireless Petersime OvoScans (each with four eggs) are placed between the eggs.

These collect real-time, egg shell data, as well as air temperature, relative humidity and levels of carbon dioxide, allowing stockmen to adjust the environment if necessary.

“By the evening of the day the eggs are placed you have some chicks out already, and a lot will be pipping through shells,” explains Mr Hoeven.

“The air is a lot cleaner in sheds compared to hatcheries, which are a lot tighter and confined space.

“In the shed, chicks have the space to roam and dry out, and within a few hours they are drinking, pecking away at feed and off to a good start.”

Vaccines are administered on farms, and a probiotic previously sprayed on birds in the hatchery is now delivered via waterlines.

At what would have been day zero, the team at the integrator return and remove any unhatched eggs, and final chick numbers are agreed.

From there, it is business as usual for the broiler farm.

Why do hatcheries exist?

As the commercial poultry industry scaled up to produce ever-more efficiently, husbandry has adapted to keep pace.

In nature, a hen will incubate her eggs in a nest with the warmth of her body. Where thousands or even millions of birds are needed, this is not practical.

The answer is hatcheries. They mimic the optimal environment for a fertilised egg – this technology meant that both commercial broiler and layer production could expand.

But there are certain disadvantages. Eggs tend to hatch over a 72-hour window, and the most vigorous chicks first out have the longest to wait before they are on farm with access to feed and water.

Chicks may also have a more stressful experience as they have to be transported from the hatchery to the farm.

That’s why several companies have looked at ways to either make the hatching process more comfortable for birds or to hatch them on farm – removing the journey and time in hatcheries altogether.