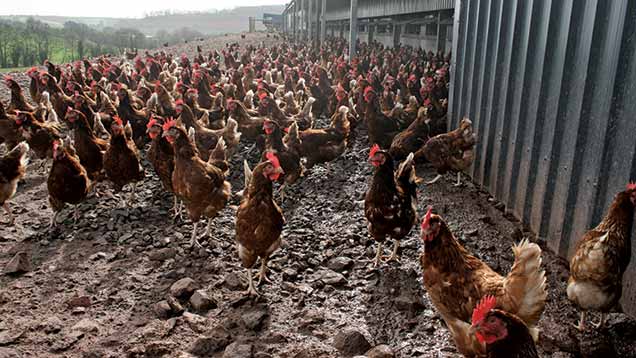 “Worms are a problem that all producers face, and we have to be careful not to get in the same situation as other species where we use a particular type of wormer so much that we develop resistant strains,” he said.

See also: Getting on top of worms

Speaking at the annual general meeting of the West Country Layers Association in Devon, Mr Young said that rotating different wormers was vital. “There are several products that are licensed for use in poultry, and the more products that are developed with a nil egg-withdrawal period the better it will be for the industry.”

However, rotating wormers was only part of the process, he added. “You need to carry out faecal egg counts and only worm when necessary – a lot of wormer is wasted by routine dosing every eight weeks. So look for clinical signs and carry out post-mortems to get an accurate picture of what’s going on at your farm.”

Producers should select the appropriate wormer to target the strains present on farm, and administer the correct dosage. “Inappropriate dosing has led to massive problems with resistance in the sheep industry, and we need to learn from that.”

To carry out a faecal egg count, Mr Young recommended placing four 12x12in boards per 2,000 birds beneath the roosting area, and pooling the faeces before submitting for testing. “If you just go and collect solid faeces from the field you may miss the eggs – you want a representative sample.”

This should be repeated every four to six weeks. Producers should then choose an appropriate wormer, if necessary, to be administered either in the feed or in water. “If you have gapeworm you’ll need to treat immediately, so will need an in-water wormer, as to order medicated feed and wait for delivery could take a couple of weeks.”

According to Kate Pitman from MSD Animal Health, poultry worms were classified into two groups; roundworms and tapeworms. And the best forms of control, alongside anthelmintic use, were basic hygiene measures.

“Keep feeders clean and off the ground, don’t stock too heavily and place stones outside your popholes to keep the birds’ feet clean,” she said.

Keeping grass on the range short would expose eggs to sunlight and kill them off, with hot and dry weather particularly beneficial. “If you do manage to find worms, there will likely be a heavy infestation.”

The three active ingredients currently licensed for poultry use are flubendazole, piperazine and fenbendazole – the latter of which featured in MSD’s new Panacur AquaSol. “MSD wanted to design something that you could administer to birds in water without sedimentation and blocking up of nipple lines,” said Miss Pitman.

“We used a wet-milling technique to create a product that, when in suspension, doesn’t settle out or need to be stirred during administration. Treatment is required for five consecutive days; a zero withdrawal period applies to eggs and a six day withdrawal period is necessary with regard to meat and offal.”