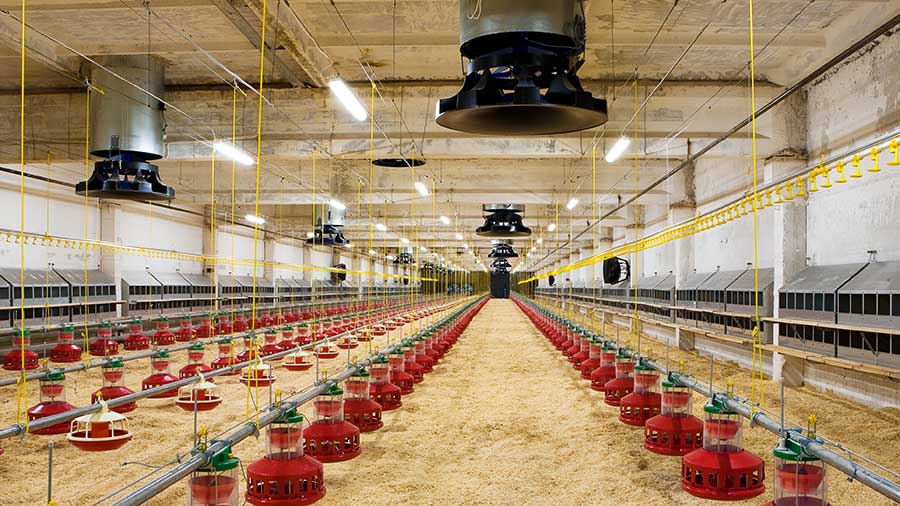 Maintaining a healthy and productive environment in poultry housing requires careful management of a number of interrelated factors.

Producers have to walk a fine line, balancing ventilation rates, humidity and temperature during the winter months.

See also: 9 ways to have disease-free poultry ranges in winter

Through the winter, this becomes more of a challenge – particularly in older systems.

Achieving temperature targets for birds at different growth stages can be more costly and time consuming in the winter.

However, regardless of the weather outside, the first four days of brooding remain critical for early development and growth, later flock uniformity and finished weights, according to Mr Jackson.

“When thermal comfort is not met, the chicks can huddle together, leading to delayed feeding by up to a day,” he says.

Finished broiler weights can diminish by up to 50g a bird. On an average price/kg that equates to a loss of 2-4p a bird.

Cold chicks become quiet and inactive, choosing to huddle together to maintain body temperature instead of feeding and drinking. “Chicks in the centre of huddles are even less likely to feed which exacerbates unevenness in the flock,” he explains.

Producers need to be aware of the impact temperature and feed intakes have on lifelong gut health – without the right conditions, gut development is compromised, leaving the bird vulnerable to gastrointestinal disease for its entire productive cycle.

Mr Jackson recommends preheating the shed before fresh litter is put down.

Concrete floors can quickly become chilled between flocks, especially in the winter months. But a common mistake in response to this is to attempt rapid heating.

Cold concrete rapidly heated will draw condensation, leading to damp litter early in the crop, increasing the risk of disease and pododermatitis – lesions on the foot pad and hock.

Pododermatitis is caused by a reaction between uric acid in poultry faeces and moisture in the litter, which then acts as a skin irritant.

“Producers can receive trigger reports, and even face an Animal and Plant Health Agency investigation, if broilers at slaughter are scored above maximum acceptable levels,” Mr Jackson warns.

At placement, the concrete temperature needs to be 28C, with a litter temperature of 32C.

Pododermatitis risks are also increased when the ventilation pressure in the shed is insufficient, because the incoming cold air will sink to the floor, chilling the flock and compromising litter quality.

Another consideration with limited ventilation rates is raised levels of noxious gases, generated by the birds in production as well as any from direct heating systems.

“When carbon dioxide levels are high, birds will become less active, spread will be affected with feeding and drinking levels off target,” Mr Jackson says. ”Importantly, these gases are hazardous to human health.”

The maximum legal level of carbon dioxide in broiler production is 3,000ppm while for ammonia it is 20ppm.

After the broilers’ initial seven-day brooding phase, ventilation and temperature need to be carefully managed to bring down humidity levels to 55-65%.

This is because higher humidity quickens the incubation period of infectious coccidial oocysts. “Coccidiosis presents most often as diarrhoea but the destructive nature of the parasite in the intestinal wall reduces nutrient absorption from feed so the bird becomes less efficient and more susceptible to secondary disease,” explains Mr Jackson.

Coccidiosis infection can cost up to three days of growth per case in commercial broiler flocks.

“The producer’s aim is to ventilate as much as possible – providing an even distribution of fresh air across the entire flock – but without affecting the required production temperature, while also keeping humidity and emissions at acceptable levels,” says Vencomatic’s Linden Dixon.

To meet this challenge, he recommends that the following points are followed: