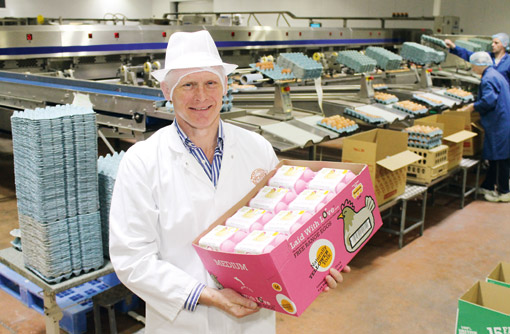 The Lakes Free Range Egg Co is striving to reduce its environmental impact, project the right image and make a profit, as Philip Clarke discovers

By their very nature, egg packing stations tend to be somewhat functional – a place where eggs arrive on big trays and leave in small boxes.

OK, there is a lot of fairly high-tech stuff that goes on in between, but in terms of aesthetics, they often leave a lot to be desired.

Not so at The Lakes Free Range Egg Co where the packing station, erected in 2010-11, is as impressive on the outside as it is on the inside.

Turning off the main road into the dry-stone walled entrance, it is immediately obvious that a great deal of care and attention has gone into the infrastructure. The main building is constructed of local stone and blends into the Cumbrian environment effortlessly.

Walking into the reception area, it’s all wood and stone, with an eye-catching spiral staircase winding its way up past a Lakeland mural to the glass-walled board room.

“We knew five years ago that we would have to move, as we were outgrowing our packing facility on the farm,” says chief executive David Brass. “But we did not want to move to an industrial unit on some out-of-town business park.

“We like to work where we live and, given that we can see the packing station from our house, we wanted something we could be proud of.

“Also, as we are just off the M6 motorway, we could not ask for better transport links. So why move?”

Mr Brass denies that this attention to the aesthetic has added significantly to cost. Local craftsmen were used throughout, cutting out the middleman wherever possible, and Mr Brass did much of the research into various aspects of the design himself.

The aim is to be carbon neutral – and there are many features in the design that help towards that.

For example, there is up to 300mm of insulation fitted to all walls and roofs to minimise heat loss.

The packing station also has an “intelligent” heat management system, monitoring the outside ambient temperature and adjusting the settings inside the buildings accordingly.

Heat is provided by a ground source heat pump which takes water from three bore holes at about 10C, extracts the heat, and returns it to the ground at about 2C. It can also work in reverse in the summer, pumping heat back into the ground.

There are also biomass boilers at the site, which use thinnings from the ranges to generate heat.

Electricity is another area where he is constantly on the look out to make savings.

To help minimise demand, there are no light switches anywhere in the building. All lights – LED of course – are controlled by movement sensors, which ensure they only come on when there is someone in a particular part of the factory. “These measures alone have saved us 20% on our electricity bill.”

Then there is the use of solar energy. Last year, about half the site’s electricity needs were generated by solar panels set out in the fields, doubling up as range enrichments. “That was during the wettest year on record,” says Mr Brass. “We are hoping to see more sunshine this summer and do even better.”

Rainwater harvesting for non-food related site use is another example of green ideology working in practice.

When it came to equipping the factory, the focus was also on efficiency and innovation. In this endeavour, the award of a £928,000 grant under the Rural Development Programme for England helped enormously.

“We had intended to reuse much of the equipment from our old packing station across the road, but the grant enabled us go for new,” says Mr Brass.

All the egg packing equipment in the new site is from Moba, with six Mob 330 graders installed. This has doubled capacity to 10,000 cases a week, and there is space available to double this again should the need arise. “We won’t have to move again.”

The Lakes has also invested in new robotic technology – the first packer in the UK to use robots developed in the car industry to pack egg boxes into crates. The two Yaskawa machines are each able to handle over 6,000 six-egg packs an hour, calibrated to 0.1mm accuracy.

“They are very good for long production runs as they take away the drudgery of stacking egg boxes,” says Mr Brass. “It also makes it a more exciting environment for people to work in. We’ve not had to cut the workforce at all, as our business has been growing anyway. But we have upskilled them, training them in areas such as programming and operating advanced machinery.”

Another example of such innovation has been the introduction of lasers on the packing line, to burn on the Best Before date to each box of eggs. 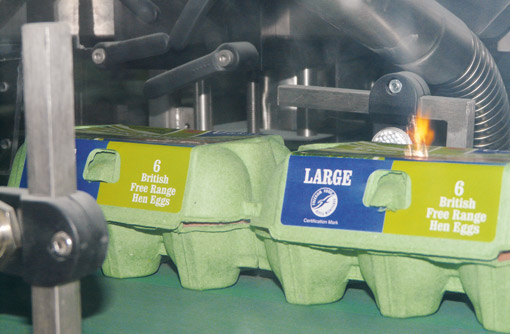 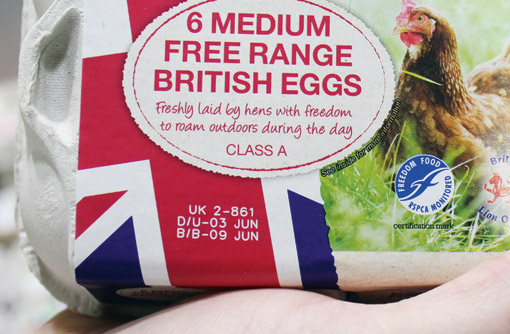 “The lettering comes out white on the pack, so we’ve had to encourage some of our customers to change the design on their egg boxes,” says Mr Brass. “But since introducing the technology, we’ve saved half a tonne in sticky paper a year – another environmental saving.”

The use of such high-tech systems means the packing process is some 60% faster than the old facility.

The factory also makes extensive use of CCTV, which logs every single stage of the packing process, from the moment the eggs arrive to the moment they leave. “This gives us a fail-safe record if we ever get a customer complaint about a delivery. Not surprisingly, these are now very few and far between.”

The Lakes also uses integrated transport planning to cut down on food miles as another way of lowering its carbon footprint. “We deliver 60% of our eggs ourselves, and we work closely with customers, such as McDonald’s, to help with backhauling, should their lorries be passing this way. That saves an estimated 20,000 litres of diesel each year.”

Overall, Mr Brass says the investment in state-of-the-art equipment and attractive infrastructure has paid dividends. “It’s not cost us more, but it suits the image of what we do, which is vital for customer relations. All our farms have to have environmental programmes, and so does our packing centre.”

The business is independently audited by Environwise, which produces a detailed plan to minimise the environmental impact and energy use. It hopes to achieve zero net carbon emissions from the packing centre by the end of this year.

Producing as well as packing

Almost all the eggs going through the packing centre at The Lakes Free Range Egg Co are laid on the company’s own farm, or by a small number of contracted flocks. In total there are over 500,000 hens – mainly Shaver Browns.

Contracted farms are typically small. They have an average flock size of 7,500 hens and are all located within 30 miles of the packing centre.

All contracted producers have to have biodiversity action plans, put together by FWAG (Farm Wildlife Advisory Group), and must be members of the Entry Level Environmental Stewardship Scheme (ELS).

Tree planting is a priority. Over 100,000 native species of trees have been planted by the company in the past 10 years, to encourage ranging and reduce feather pecking, as well as to contribute to carbon reduction.

With a priority on welfare, all farms are also Freedom Food registered and members of McDonald’s Agricultural Assurance Programme. The Lakes home farm is a McDonald’s flagship farm.

All sheds are naturally ventilated and all but one are flat-bed systems. “We do have one multi-tier on a contracted site, as we want to see how they perform. But my instinct is that multi-tier is not the image that people have of free-range poultry – they don’t look right.”

Mr Brass is a great believer in good management. “Farmers may complain about chick quality, or feed quality, but 90% of egg production is about management. It’s attention to detail, like letting birds out on the right side of the shed on a windy day and maintaining tight biosecurity, that really counts.”

The company holds regular producer meetings and also provides a benchmarking service. “Our average production comes to about 310 eggs per bird off just 120g of feed a day – a performance that is on a par with many cage systems.”

The Lakes is also a significant pullet rearer, taking care to ensure that the 500,000 birds it rears each year are managed in systems very similar to the conditions they will find when they go out on to farms.