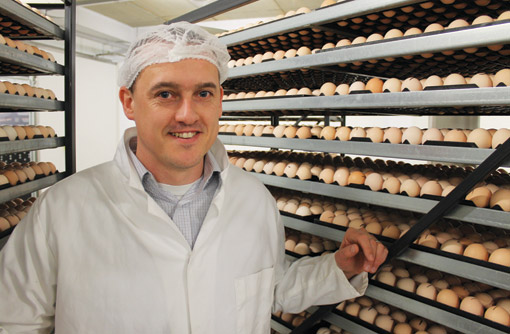 A relative newcomer to the UK poultry scene, Annyalla Chicks has been keeping its head down, while growing its business, as Philip Clarke discovers

Annyalla Chick’s hatchery in north Wales can be likened to a new school uniform – neat and tidy with plenty of room for growth.

“We were originally looking for something about half this size,” company director John Mawer says of the ex-airline meal preparation building on an industrial park outside Wrexham.

“But it was in just the right location for us and, having been a food factory, it already had excellent standards of hygiene and infrastructure. Besides that – it’s better to be too big than too small.”

The company’s decision to set up in the UK followed a period of steady growth in the Irish broiler sector, where Annyalla now has a claimed 70% market share.

“My father (also John) started the parent business – Enfield Broiler Breeders – in 1971. At the time he was working for Cobb in Ireland at a time when there were about 25 hatcheries for a relatively small market.

“He started in broiler production when one of his customers rented him a shed, but soon after he went into broiler breeders, taking on a second shed.”

The big break came in the early 1980s, Mr Mawer recalls, when one of the hatcheries his father was supplying in Dublin went bust and the family took over the order book for 15,000 chicks a week. That was the birth of Annyalla Chicks.

Slow, but steady expansion then followed, as the fragmented Irish hatchery business started to consolidate and Annyalla picked up businesses. By the early 1990s, the company had acquired four hatcheries and a number of its own farms, producing some 160,000 chicks a week.

“We were also too fragmented, so we bought a warehouse on the outskirts of Dublin – close to the original hatchery – and brought everything under one roof,” says Mr Mawer. “That was in 1996 and we were doing 300,000 a week. By 2000 production had reached 450,000 and we had reached full capacity.”

But then Monaghan Poultry went bust and Annyalla seized the opportunity to move into the heart of Irish “chicken country”, buying the hatchery from the liquidator in 2002. “As well as being surrounded by 60% of the Irish chicken business, this also moved us closer to Belfast and the UK market.”

Annyalla closed the Dublin operation and stepped up production in Monaghan, initially doubling it to 500,000 a week, then doubling it again to a current level of 1.1 million chicks a week, following a long-term agreement to supply Carton Brothers.

Throughout this time, the company has been building up its farming side and now has six of its own farms, housing some 170,000 broiler breeders, with another 36 contract rearers spread across Ireland.

As well as growing to dominate the Irish market, Annyalla always had aspirations to become a player in the larger UK market.

Soon after the purchase of Monaghan Poultry, it started its first shipments of 50,000 a week to the UK mainland. This went better than expected. At the time, there had been a major fire at the Mayfield hatchery in Lancashire and the site was not rebuilt. Other hatchery businesses also closed. “This left a hole in the market and we saw an opening in the independent sector for up to three million chicks a week.”

Initially Annyalla exported fertile eggs to Holy Berry Hatcheries in Lincolnshire – now owned by Aviagen Turkeys – as it was already running at full capacity in Ireland. “This contract hatching business grew to about 400,000 a week, at which point we decided it was viable to start doing something ourselves,” says Mr Mawer.

The search for a suitable building started five years ago, but it took until 2010 to find the right place and then kit it out as a hatchery.

The former Delta Foods site in Wrexham had been empty since 2006 – a casualty of the budget airline industry, which no longer provided flying customers with hot meals. “At 85,000sq ft the site is way bigger than we actually need, but we did get a good deal on it and it is close to many of our customers.”

Annyalla set about stripping everything out and re-equipping parts of the building internally, using Petersime equipment imported from Belgium. “We have an established relationship with Petersime and use it in our Irish hatchery, so we now have compatibility between the two countries.”

About £1.5m of funding was provided by Barclays Corporate, with another £3m invested from the company’s own reserves. “We have always looked to limit our borrowing and grow out of cashflow,” says Mr Mawer.

With all the kit in place, production started about two years ago – mostly Ross 308 birds and Hubbard JA575s – for a range of customers in the independent sector.

Current production at Wrexham averages about 700,000 chicks a week, just short of capacity of 850,000 chicks a week. “We could go up to 1.5 million a week if we needed to, by putting in more equipment. We’ve certainly got the space to do it and a lot of the general infrastructure is already in place. It would only cost another £0.5m to increase capacity by 20%.

“But our next step is probably to develop our own farms nearer the hatchery. We currently have one contracted farm near Newcastle with 35,000 broiler breeders, and another one in Northern Ireland – otherwise all our fertile eggs are shipped in from Ireland using our own lorries.”

While Mr Mawer is satisfied with the progress so far, it has not been without its challenges, including the high cost of feed which has squeezed margins.

“Feed ties up a colossal amount of working capital. But it’s a problem that is hurting everyone in the poultry sector, especially as the poor quality this season is also undermining bird performance. It’s really just a case of standing our ground and waiting for things to improve.”

But overall Mr Mawer remains optimistic about prospects for the broiler sector, as demand for chicken grows and consumers turn away from imported and processed meat.

“Our aspiration is to continue to grow our business in the UK, slowly and non-aggressively,” he says. “We recognise that we are a small family business in among some very strong companies, so our policy is to avoid confrontation – they all have a bigger bite than I do.

The hatching process at Wrexham

Most of the eggs arriving at Annyalla’s Wrexham hatchery come from Ireland and Northern Ireland, though the company does have one contract rearer near Newcastle. All parent birds have been vaccinated for Newcastle disease, infectious bronchitis, Marek’s disease and Gumboro.

The eggs arrive in loads of 170,000 on a company lorry, stacked on Petersime trays. Mr Mawer says he likes the Petersimes because none of the eggs touch each other, leading to fewer cracks and better hatchability.

The trays are taken from the farm trolleys and placed on setter trolleys, before being moved to a room for fumigation – a 60min process using warmed formaldehyde prills. 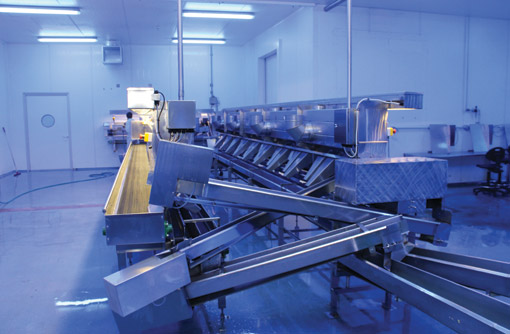 From there, the trolleys are placed in the Petersime AirStreamer setters where they are kept at 37.5C and tilted once an hour every hour for 18 days. Each setter has enough space for 115,200 eggs.

The eggs are then transferred to hatcher trays, which are stacked into the incubators for the last three days. Each incubator holds 38,400 eggs, from which just over 30,000 chicks will emerge. The Hubbard JA575s achieve a slightly higher hatch rate of 85% compared with the Ross 308s at 82%.

Once hatched, the chicks are tipped on to sorting lines. About 70% of the chicks will be sexed, according to customer requirement, and then counted into baskets for dispatch. Most will be spray vaccinated for infectious bronchitis, and some will also be injected for Marek’s – in particular those destined for free-range systems.

There are 18 full-time staff at Wrexham and another 15 agency staff. The operation is overseen by just one office manager and one assistant, with all the accounts handled centrally back in Monaghan.