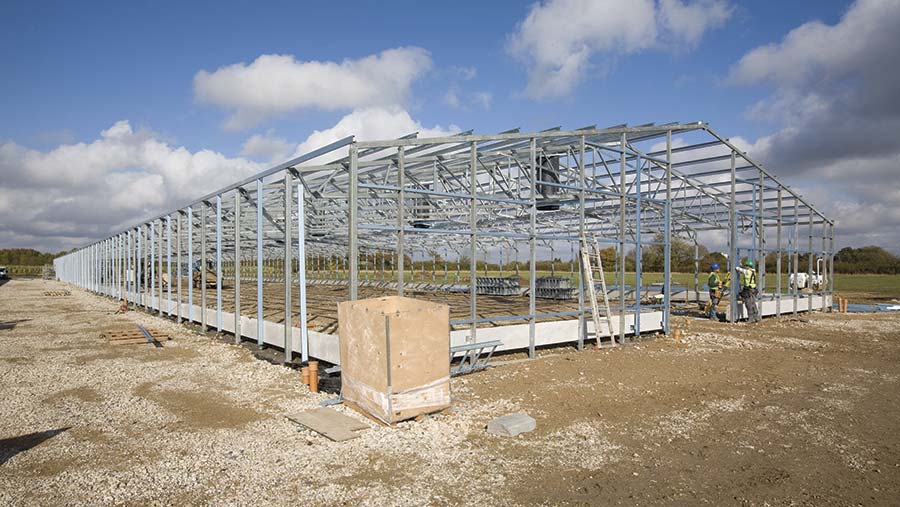 Consumer demand for eggs and poultrymeat have risen steadily over the past 10 years. Buoyant markets have already prompted hundreds of farmers to diversify into broiler and free-range egg production

But what does it take to set up, and is now the right time, amid serious concerns and warnings of oversupply – particularly in the egg sector?

Free-range egg consumption has risen by 5-6% a year for the past four or five years and forecasts suggest demand will continue to grow. But the sector looks like a victim of its own success.

Figures collated by the British Free Range Egg Producers Association (Bfrepa) show that production has rocketed from 15 million hens to 25 million since 2013.

The rate of growth has accelerated in the past three years, largely driven by diversifications that have seen the number of new units rise 12% a year since 2016, says Bfrepa chief executive Robert Gooch.

Farmers concerned about financial support after Brexit view the sector, which survives without subsidies, as a more dependable venture.

The regular income and lower volatility have resulted in huge growth in free-range numbers within traditional dairy areas, such as Wales and the west of England.

But the increase in supply has seen farmgate prices drop from about 98p/doz in early 2015 to 79.1p/doz in the first quarter of this year.

The drop has slashed profits and many farms, particularly where builds have been funded with bank finance, are finding it tough going.

The first step in developing a free-range egg enterprise is to assess the market for the produce and, right now, the market is in a bad place, Mr Gooch says.

Contracts are largely based on a guarantee to take a farm’s produce, but not at a fixed price, so the business will be exposed to any declines.

Egg packer LJ Fairburn, which takes produce from almost 60 units in the north-east of England, confirms that the market is well supplied.

“We are not looking for any new producers yet but demand is forecast to keep growing long-term and we may see equilibrium return,” Mr Holt says.

Anyone who wants to proceed should do so only with a firm written contract, he warns.

Before embarking on a development, check with Defra which locations carry a high risk of avian influenza and avoid these areas.

The location of a proposed unit will also have a bearing on whether the application is likely to gain approval with the local planning department.

Local councils have differing agendas and policies towards new poultry units, Bfrepa warns. The organisation collates data on planning to show where sheds are being put up and where they are coming down.

He advises engaging with the Local Planning Authority early to give the project the best chance of success.

Within the planning process there are a number of potential challenges that must be met.

Even below these thresholds a screening opinion should be sought as to whether an EIA is required by the authority.

The site will also require an Integrated Pollution Prevention and Control (IPPC) permit from the Environment Agency if stock numbers are above a 40,000-bird threshold.

A 32,000-bird unit will cost about £1.5m to establish and faces losses of about £4 a bird in the current market, including finance costs.

If funding is available without borrowing it could still be possible to survive this difficult period.

It is important to cover all costs, not just those of erecting the building. Everything from planning permission and consultancy to providing adequate access for vehicles must be considered.

The building should be a robust, multi-tier or flat-deck system that will house birds in a healthy, welfare-friendly environment. Beyond the building there are the land costs, fencing for a 16ha range, and enrichment costs.

During a review of his business in early 2017, farmer Stuart Russell decided a diversification would improve his resilience if subsidies were abolished after Brexit.

He began a process of research which involved visiting established producers and discussing the market and contract possibilities with local egg packer LJ Fairburn.

A contract was agreed with Fairburn for the eggs produced and planning for a single 32,000-bird shed began. 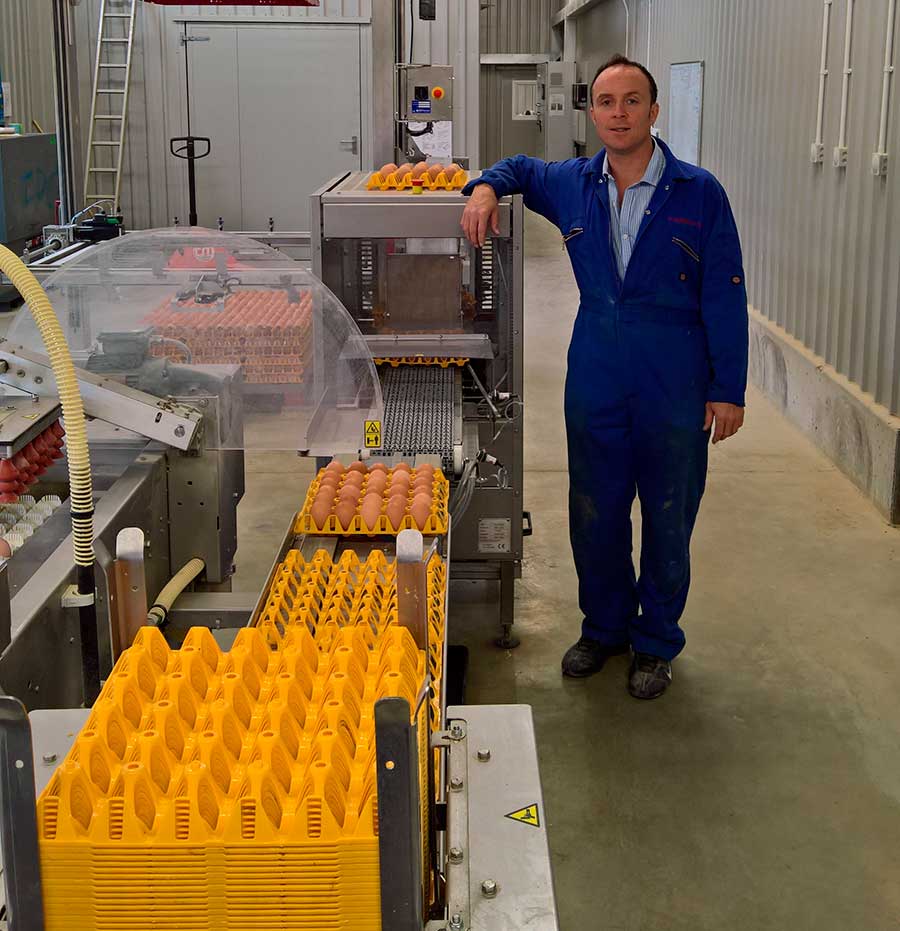 Planning permission was submitted in June 2017 but was met with objections. Local villagers were concerned about a greenfield site development, odours and additional traffic.

However, the site’s design, the positives of a more resilient business and the extra employment meant the council eventually gave the go ahead.

Groundwork began on the sloping site in March 2018 and 8,500t of earth were moved. Construction of a steel clear-span building, supplied by Morspan, followed.

The design provided two 16,000-bird units under one roof with independent environmental controls.

Costs were high for the concrete footings, floors and access for articulated lorries. In addition, the building frame cost about £250,000 while ventilation, feeders, the control centre and water lines added almost £500,000.

Beyond the building, 40 acres of range was planted with 2,000 trees.

In all it is a £1m-plus project, Mr Russell estimates.

The set-up has been operating since September 2018 and the birds, Bovan Browns supplied by LJ Fairburn, have just passed week 50.

The UK slaughters 20 million broilers a week and the total value of the sector is growing by about 3% a year, says NFU chief poultry adviser Gary Ford. The total farmgate value of the broiler industry is roughly £1.8bn. 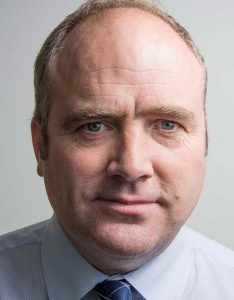 According to market analyst Kantar, volume growth in consumption was about 3.7% for the 12 months to 24 March 2019.

That means the increase in consumption rates for the period was more than double the 1.6% growth seen in the 52 weeks to 24 March 2018.

In terms of location, the 37,000-strong UK workforce is concentrated in East Anglia and the West Midlands, as well as Herefordshire and Shropshire.

More than 90% of broilers are grown to meet Red Tractor standards and the increase in consumption is mainly in this type of bird.

Consumers are extremely price sensitive when buying chicken, and higher-welfare RSPCA Freedom Food birds account for just 3% of the market.

The first step towards establishing a broiler unit is to contact a nearby processor to establish whether contracts are available in the area, Mr Ford says.

Location is of paramount importance, both to limit haulage distances and because some areas are already oversupplied.

Most broiler farms (80%) work with a so-called integrator. These firms supply feed and day-old chicks and will take all the birds reared at the end of a 37-day production cycle. Payment is based on weight, less any dead birds.

Working with an integrator means there are no upfront costs and output at seven to eight crops a year is good for cashflow.

Alternatively an independent can be used, which provides more freedom to negotiate bird and feed costs. But an allowance must be made in cashflow planning for bulk-buying of these items.

Consideration should also be given to which assurance scheme is appropriate because stocking rates vary between the schemes, Mr Ford points out.

The UK standard allows for 39kg/sq m, Red Tractor assurance is 38kg/sq m while Freedom Food is 30kg/sq m. About 90% of birds are produced to Red Tractor standards and most retailers insist upon this as a minimum.

If the processor provides a letter of intent to take production, discussions with the bank manager should start immediately, says Mr Ford. He suggests basing construction estimates on a standard figure of £25/sq ft or £269/sq m for units of 2,400sq m.

To meet processor requirements for larger suppliers, units are usually four houses of 50,000 birds each and cost roughly £2m.

Broiler units are relatively simple and space-efficient, with a limited area required around the perimeter of each house, Mr Ford suggests.

Most newly erected houses are clearspan, steel-framed with plain concrete floors. However, windows for natural light must now be included, with an area equivalent to 3% of the floor area.

With a large open space, energy efficiency is key to limiting ongoing costs.

Day-old chicks require temperatures of 33C and an efficient system is necessary to achieve this level of heat. Most units opt for renewable heat such as biomass boilers or ground-source heat pumps with a fan system to move the warm air and ensure there are no cold spots.

Planners initially rejected the project because of potential emissions and council guidelines which stated that farm buildings could only be constructed near existing ones.

However, Mr Elliott had applied for an IPPC permit, and the work to assess and mitigate the unit’s impact helped present a successful case at appeal.

After almost three years, construction finally began 14 months ago and all went smoothly.

“We chose to use Powells, a Herefordshire construction company with experience in poultry housing,” he says.

Ventilation is via side inlets and twelve 1.2m extractor fans at the end of the shed. Short-line feeders and six rows of Lubing drinkers are fitted inside the units, which sit on concrete floors and 5cm-deep shavings.

The unit is operated by Mr Elliott’s daughter and son-in-law, who have also taken on the considerable burden of the finance.

Among the major costs were the groundwork and provision of access for articulated lorries. Overall the unit cost about £1.5m plus £200,000 for the land.

The unit is now progressing well through its third crop of broilers, grown for Maelor Foods based in nearby Wrexham.

The British Free Range Egg Awards celebrate the best the sector has to offer, with a range of categories that cover producers, employees, retailers, marketing initiatives – and many more.

The deadline for entries is 28 June, and winners will be announced on 14 October at Bfrepa’s annual gala dinner.