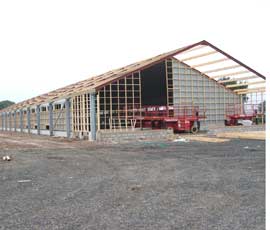 Planning officers need to understand that large-scale farming is essential for food security and for a healthy rural economy.

Speaking to Poultry World, NFU planning adviser, Ivan Moss, said he wanted to send a clear message to planners and opposition that they “shouldn’t be frightened” of expansion.

“Farming isn’t something that just happens, it is a business and this is one way the industry is developing and we shouldn’t be frightened,” he said.

His comments come after planning officials received over 187 objections from residents and campaigners over plans to build six broiler sheds in Market Drayton, Shropshire.

Harrisons Farms submitted an application to build the units, which will house 330,650 birds a crop, last April.

But since then scores of people have opposed the development, citing issues with welfare, traffic, noise and odour.

One objector, Mrs S Matchwick likened the unit to a factory farm. She said: “Not only is factory farming a living nightmare for animals, it also has a severely detrimental effect on the environment, both locally and nationally.”

In total, 194 people have commented on the application, with only a handful supporting the scheme.

“If we are going to produce more food, large-scale farming is one of the routes we have.

“At the moment, of the food we could grow in this country, we only produce 62%, but we could be doing a lot better,” he said.

Mr Moss said the public lacked an understanding of what large-scale farming entailed and thought many people would be surprised at the high welfare standards.

“I don’t come from a farming background and have been very surprised how well the animals are kept.

“With the amount of investment a farmer is making, he is going to look after his stock. You can’t afford not to.”

Mr Moss said the NFU had a big role to play in getting the correct message across by engaging with local authorities and the public.