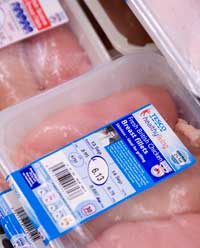 Poultry producers are using a new breed of chicken to meet consumer demand for birds with bigger breasts.

The birds will be sold under the Freedom Food label from September.

TV cookery shows featuring recipes by Jamie Oliver are believed to be behind the change in consumer tastes.

Shoppers were increasingly reluctant to buy chickens with smaller breasts, delegates at an NFU council meeting were told on Tuesday (30 June).

NFU poultry chairman Charles Bourns said: “The British consumer has been moving away from them despite price promotions.”

The new breed of chicken was slower maturing and more acceptable to the consumer, Mr Bourns told delegates.

Meanwhile, egg producers have benefited after media reports urging shoppers to buy smaller eggs because they are less painful to lay.

Demand for size three eggs had risen as a result and the price paid to producers had increased by 6p a dozen, said Mr Bourns.