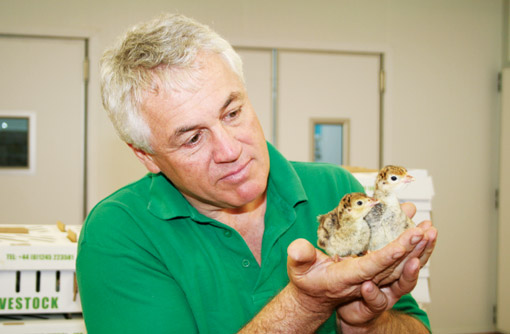 The investment of more than £800,000 over five years by Kelly Turkeys in expanding its pedigree farm and hatching facilities shows just how confident the company is in the future of the traditional Christmas turkey.

It might seem tempting fate to say the product is virtually recession proof – but that indeed is the experience of two generations of the Kelly family over more than 40 years.

Father Derek Kelly started producing turkeys for the Christmas market in 1971 when he acquired a hatchery at Danbury, near Chelmsford, Essex, from River Rest when the US company went into liquidation

With a background in international poultry breeding, he saw the need to distinguish the traditional product from the commodity market, basing the business on slow-growing breeds reared to maturity and hung for two or three weeks to enhance the flavour.

These artisan methods have given the traditional turkey an appeal that has helped secure its future through the financial crises of the 1970s, early 1990s and the current hard times. And while there have been fundamental changes in the marketing of Christmas turkeys during that time, the overall level of demand has remained constant.

“Families have had to make sacrifices in their weekly household spending – but not many choose to go without a turkey at Christmas,” says managing director Paul Kelly. “We continue to see a strong demand for top quality at the traditional, dry plucked end of the market despite much stiffer competition.

“The multiple retailers have certainly raised their game. They no longer see Christmas turkeys as loss leaders and expect to make a margin, and they’re continually increasing the specification of the turkeys they sell. They tend to rely on larger strains not grown to maturity which don’t have the conformation, meat yield or meat texture that consumers expect from our type of turkeys.”

It was the Kelly family who led the trend back to bronze feathered turkeys, having to overcome initial resistance to the reappearance of black stubs that butchers had been keen to leave behind a generation before. The stubs even became seen as “designer stubble” to hallmark the product.

Now it is flavour that is the primary goal. “We’re pretty much where we want to be on conformation and growth rate, but we believe there’s quite some potential to develop the taste further,” says Mr Kelly. “We’ve found significant differences among our nine pure lines and it’s taste where we’re putting the most emphasis.

“This is where we see the traditional Christmas market going, with consumers able to differentiate between products in terms of flavour and eating quality, as well as the lifestyle of the birds.”

The investment of £800,000 is enabling the business to expand breeding capacity and enhance security with the pedigree population, spread across farms in different areas of the UK.

“With our pedigree farms in Scotland and Essex, and with our pedigree sister farms in East Anglia, we have a strategically placed gene pool that reduces the risk of not being able to export due to disease outbreak. Health certification is critical to this,” says Mr Kelly.

Kelly Turkeys also has a partner in a German company, Freiland Puten Fahrenzhausen, founded 16 years ago. The business sells the Kelly breeds and has grown into one of the largest producers of organic turkey products in Europe with farms in Germany and Austria, and sales to many European and Middle East countries.

Then, last November, the KellyBronze turkey was introduced to the US market for the Thanksgiving festival, retailed through butcher’s shops in Virginia as a trial marketing exercise. Mr Kelly was there to help get the venture off the ground and returned encouraged by the feedback,

The challenge is to convince consumers to pay around $10 a lb for a KellyBronze when the supermarkets sell the frozen product for $2 a lb. A hand-plucked, traditional strain turkey grown to maturity is a novel concept in the USA.

Mr Kelly is back in the USA this autumn and he’ll be particularly interested to see how many repeat sales there will be. Then his sights will be set on sending breeding stock in 2014 – the larger Wrolstad breed to cater for the demand for 12-16lb turkeys, rather larger than the popular weight in this country.

The Scottish breeding operation is a joint venture between the Kelly and Monk families. The association goes back 30 years to Mr Kelly’s days at the Scottish Agricultural College in Ayrshire when he and Jim Monk became colleagues.

Jim and his brother Alistair began rearing KellyBronze turkeys on a rented farm in 2006 and then, two years ago, KellyBronze Scotland acquired the 50-acre Magbiehill Farm, a former dairy unit near Dunlop, Stewarton, to develop it as a breeding unit.

Magbiehill Farm has three main buildings, the two largest around 7,500sq ft each. Cow cubicles were removed, new concrete flooring and automatic feeding installed, and sidewalls opened to allow turkeys access to the range. The larger sheds are used for breeding hens during the summer and then Christmas turkeys from August to December, with the smaller building used for stags and breeder hens.

The farm houses 6,000 breeder hens, along with 4,000 turkeys for Christmas last year and another 1,000 growers sold to Scottish farmers.

During the summer the farms employ six full-time people and up to 25 people during December. It has proved easy to recruit local workers, with some moving from Nicholas Turkeys which had farms in the area.

KellyBronze Scotland is expanding Christmas sales through developing links with butchers as members of the Scottish Federation of Meat Traders, by building a reputation for quality, and exhibiting at shows such as the Glasgow Good Food Show and the Meat Traders event in Perth. The target is to sell 10,000 turkeys for Christmas.

* It was a great shock to learn of the sudden death of Jim Monk in early May. In a personal tribute, Mr Kelly wrote: “When the opportunity arose to start a business in Scotland with Jim and his brother Alistair, I jumped at the chance. To find such hardworking, honest people is rare, and to have them as friends as well made the decision very easy.”

In his role as chairman of the British Turkey Federation, Paul Kelly now has the wider interests of the turkey industry as his concern. A key aim is to change the way British consumers approach cooking the Christmas turkey, reshaping the habit of a lifetime.

“Christmas provides a wonderful showcase for 10 million turkeys, yet so many people spoil them by overcooking so that the meat tastes dry,” he says. “As a nation we can afford to be little more edgy over our cooking times. It’s a long shot, but if people enjoy eating duck breast pink – so why not turkey?”

New turkey hatchery up and running

As one of the two major poult suppliers to the UK traditional sector, the Kelly’s FarmGate Hatcheries offers a range of five bronze and four white strains – the Tiny, Super Mini, Roly Poly, Wrolstad and Plumpy. These breeds are consistently successful at the Anglian Turkey Association’s annual show.

The recent opening of a new hatchery at Danbury enhances the overall capacity to almost 200,000 poults a week. It has been built on the site of the original River Rest hatchery, primarily to provide separate, secure facilities for the pedigree lines, but also doubling up with the main hatchery during the first half of the season.

It was 16 years ago that the main hatchery for commercial poults was opened, with the older facilities retained for pedigree stock. For the last two years pedigree poults have been hatched by Coolen in the Netherlands while the construction work was under way.

Design features include trolleys end-on to the paddle fan to achieve uniform airflow through a clear pathway over the eggs and no air resistance even when trolleys are turned.