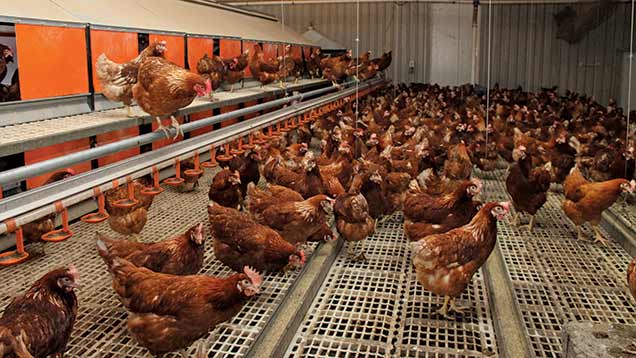 The outbreak of highly pathogenic avian influenza on a duck farm in East Yorkshire last November may have been an isolated incident, but the industry remains on high alert.

The disease could return at any time and, if it does, poultry producers may need to house their birds at very short notice – certainly in any designated protection zone, but even on a regional or national basis.

According to Defra, if birds are not used to being housed for a sustained period, this may create welfare and behavioural problems.

Producers are therefore advised to be vigilant for signs such as injurious feather pecking, cannibalism and general loss of condition.

To prevent boredom among housed flocks, which can lead to bird-on-bird attacks, scratch feeds should be considered, it suggests.

“Overcrowding may become a problem and you must take steps to ensure that the stocking density within each house does not reach the point at which bird welfare is compromised – a particular risk in hot, cold or wet weather,” says Defra in its published biosecurity guidance.

Broiler and turkey producers rearing birds for human consumption should also consider reducing growth rates, to prevent overcrowding “though you should seek expert advice before doing so, as these measures themselves may cause welfare problems”.

Producers are also advised to provide fresh litter in all temporary accommodation, and ensure that adequate feed and water, ventilation and lighting is available.

“Always ensure that your birds have clean water – do not use standing water that may have become contaminated by wild birds.

And ensure that stockmen inspect the birds more often in order to pick up problems before they lead to the deterioration of bird welfare.”

Having a contingency plan that can be put into operation will make sure flock welfare remains a priority at a critical time.

Particular care is also needed when releasing free-range birds after a period of confinement, as they may exhibit increased levels of aggression or feather pecking.

“The cause of these behavioural changes is not completely understood, but should be treated in a similar manner to any outbreak of these behaviours,” says Defra. “You should inspect livestock more regularly than once a day.

This will ensure that any injurious pecking resulting from confinement or post confinement is detected at the earliest opportunity, and enable you to take steps to treat or cull injured birds.”

Ideally, hens should be kept inside large naturally lit veranda-type buildings. If this is not possible, producers should maintain light intensity at 10 lux or above in the perching, feeding and walking areas during the housed period, and post confinement unless injurious pecking occurs.

“You should only decrease light intensities for the period where injurious pecking is a welfare problem,” says Defra.

During confinement and release, resources such as food sources, should be increased in availability to reduce competition. Space allowances for free-range hens, as specified in legislation, should be maintained or increased.

Reintroduction to the range should be carried out with minimal disturbance to the birds. “You should treat the flock as if it was a young flock and reintroduce birds to the range gradually.”

When birds are housed during an outbreak of avian influenza, it is important to cover any openings with netting, so as to exclude wild birds.

Other buildings may also be used, such as barns and outbuildings, so long as they too are netted off.

Temporary outdoor pens using straw bales and netting may suffice, but wild birds should be prevented from defecating on to confined birds.