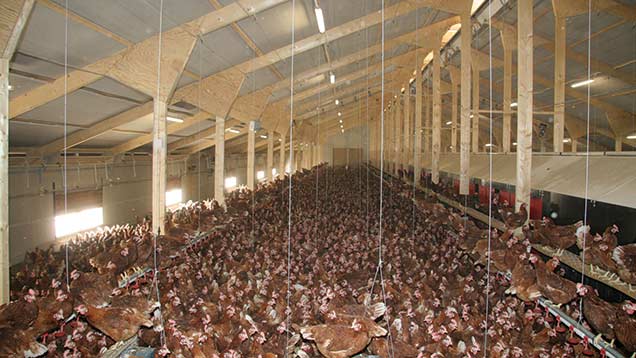 Vent pecking and cannibalism are an ongoing concern for free-range egg producers. But what factors are causing them? Philip Clarke reviews a new study from Bristol University.

Conventional wisdom about the factors that cause vent pecking and/or cannibalism in free-range flocks has been challenged by a recently published Bristol University trial.

The survey results, based on a two-year study of 119 flocks on free-range and organic farms, finds that some of the interventions commonly known to reduce feather pecking may have the opposite effect when it comes to vent pecking and cannibalism.

The study, in the journal Animal Welfare, published by the Universities Federation for Animal Welfare, makes a clear distinction between the different types of pecking observed in commercial layer flocks.

While feather pecking is defined as “pecking and pulling at the feathers” of another bird – and may be “gentle” or “severe” – vent pecking is a targeted peck at the tissue surrounding the vent, while cannibalism is defined as pecking at the skin and tissue on any other parts of the body.

The report, led by researcher Sarah Lambton, notes that the incidence of such behaviour carries a high welfare cost, as well as an economic one. Given the possible ban on beak trimming next year, “it is more important than ever that we understand the causes of vent pecking and cannibalism, so as to better manage the problem”.

The research team therefore set out to study the conditions in isolation. This involved studying 62 farms producing barn, free-range or organic eggs, with each flock visited twice during the laying period to observe bird behaviour and collect plumage data.

This provided essential information on the incidence of vent pecking, and the team also interviewed the farmers in relation to cannibalism.

Statistical analysis showed that vent pecking had occurred in 20% of flocks around week 25, rising to 30% of flocks around week 40. Cannibalism was reported at 23% of visits. Both conditions increased in tandem with outbreaks of severe feather pecking, “although it is not clear what the causal relationship is between them”. It also seemed that vent pecking and cannibalism started earlier than feather pecking.

“It is notable that vent pecking appears sporadic,” says the report. “Of the flocks in which it was observed at 25 weeks, only half showed vent pecking at 40 weeks, suggesting a flock may ‘recover’ from this behaviour.

“It is generally thought that, once feather pecking starts in a flock, it is hard to stop. This may not be the case for vent pecking.”

Among the more surprising results, the study found that increased perch height and length were consistently associated with vent pecking, especially when the perches were more than 50cm high. This was in contrast to previous research into severe feather pecking, which had shown that higher perches and more of them actually benefited the birds.

The explanation might be that, even though the perches were higher, they were also tiered, meaning that perching birds were still closer together “with the head of one bird frequently at the height of the cloacal region of another”, stimulating pecking at those areas.

Another unexpected observation was that vent pecking increased as the size and number of popholes increased. “One might have thought that larger popholes would lead to increased range use, which in turn has been associated with a reduction in the risk of severe feather pecking,” says the report.

“But it may be that more and larger popholes increase light intensity and patches of sunlight in the house. Bright light is widely regarded by the industry to act as a risk factor for injurious pecking.”

The researchers also suggest that larger popholes may contribute to reduced litter quality, with wind and rain entering the house. Good litter quality is one known way of reducing aggressive pecking.

Then there is the issue of feeding, with vent pecking found to be more prevalent when feed was spread on the floor at some point during the laying period. Again, this was unexpected, as previous research has shown this practice to encourage foraging in young hens in rear, enhancing feather cover.

Feeding pelleted rations was also associated with an increased risk of vent pecking, though this is in keeping with previous research into feather pecking. Running chain feeders more frequently – eight or more times a day – was found to help, as did providing birds with a pre-lay ration.

Previous research has shown that high rates of cannibalism are associated with low-protein diets, while some laying hens are motivated to consume blood.

“Providing smaller popholes and taking care to design perch space in such a way that perching birds are never at head height for non-perching birds may have protective effects against vet pecking,” the report concludes. “Clearly, feeding mashed feed may also have a positive effect against both severe feather pecking and vent pecking.”