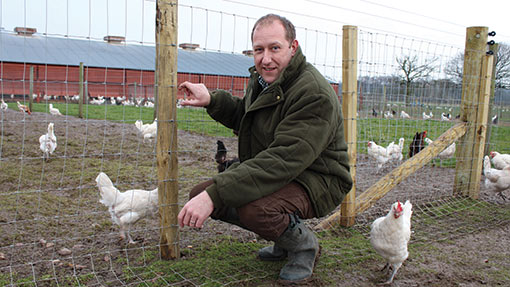 Having become frustrated with the high maintenance requirements and poultry losses associated with single-strand electric fencing, in 2001 the company’s free-range manager Andrew Watson approached fencing company Tornado Wire to develop a product to suit his needs.

By working together they developed a high-tensile, cross-wired fence that would reduce the likelihood of chickens escaping and predators gaining entry to ranges, while also reducing labour input.

The resulting fence has since become the main fencing recommendation for all of the John Bowler’s Eggs franchise units and is currently in use on 120 of its farms.

Mr Watson explains how challenges experienced at Woodcock Farm formed the basis for the design of the fence.

“We used to use single-strand electric fencing for the perimeters and internal fences, but you had to keep the foliage off it to stop it shorting out. We had to allocate one or two days a month for maintenance, like pushing the hedges back, keeping the wires tense and applying glyphosate – it was very frustrating,” he says.

The gaps between wires also meant chickens were regularly escaping, which compromised the unit’s worm-control programme.

“We have always run a unique paddock system designed to naturally control worms through land rotation,” says Mr Watson. “We have 18,000 birds on site and they’re split into colonies of 4,500 with several paddocks in each colony. To avoid worm build-up, we move the birds between paddocks every four to five weeks.”

To maximise efficiency, it’s crucial birds are not able to escape and mix between paddocks or colonies. However, Mr Watson says the previous fence design meant birds would often get out.

Rounding-up escapees before chickens were locked in at night was also adding half an hour of labour to the day. In addition, any escapees from the perimeter fence were being exposed to predators and creating added nuisance.

Initially, Mr Watson started installing high-tensile netting designed for horses around the perimeter and internal paddocks at Woodcock Farm. However, chickens were still able to dig under the fence, meaning an electric strand had to be put along the bottom.

Mr Watson then installed badger fencing that curled across the ground. This heavy-gauge wire proved successful, but the cost for fencing around the 30 acres along with the paddocks proved prohibitive.

As a result, Tornado Wire agreed to produce a similar designed fence, but with lighter gauge steel to lower the cost. It currently sells for £6-8/m, fully installed.

They also discussed the correct size of hole in the fence to prevent entry and exit.

The resulting design brought substantial benefits to Woodcock Farm and gave Mr Watson the confidence to recommend it to all of the John Bowler’s franchises.

“We did a lot of trials at Woodcock and we now know that it works. We get fewer losses from foxes and other predators, and better paddock control. It’s very rare a chicken escapes now and it’s a quick job to lock them away at night. It’s cut labour times and led to better management and welfare.”

The new fencing only requires about four days maintenance in eight years. The design is also suited to farms with mixed stock, protecting lambs from predators and keeping cattle and sheep in.

“In the long-term I’m convinced that this form of fencing is by far the cheapest,” says Mr Watson.