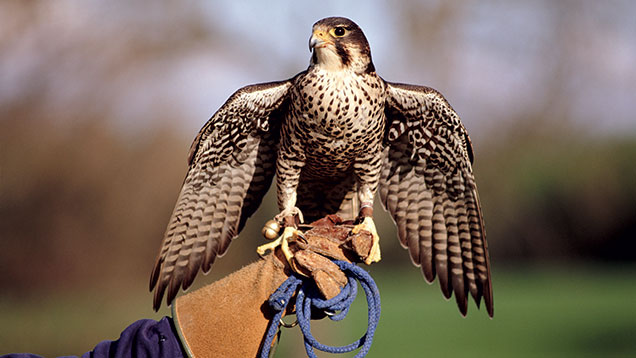 Free-range poultry flocks at risk from disease spread by seagulls can now turn to bird power as the ultimate deterrent.

And it’s a tactic that can disperse a flock of up to 2,000 seagulls in under five minutes in situations where conventional bird scaring techniques just aren’t effective.

“Hawks and falcons can be used, but hawks are not as effective on gull invasions. Hawks often have the opposite effect and attract the gulls because they try to mob them.

“Falcons achieve a very different response and will disperse gull flocks – but it has to be done systematically,” says Mr Lester of MBC Bird and Pest Solutions.

“We’ve tried all sorts of other ways of dispersing these birds – pistols and kites – but nothing works as well as the falcons.”
Tim Lester, pest specialist

Peregrine falcons – and hybrid peregrine cross lanner falcons – are the main part of his armoury.

But poultry farmers suffering from regular visits from large numbers of gulls need to gather plenty of information before the deterrent strategy is introduced.

Having a clear picture of the degree of “pressure” being applied to a farm site by gulls or rooks, and the times of day it occurs, provides all-important data on which to base the pest control plan.

“Initially an intensive programme of flying the falcons is required – probably for one or two weeks to establish the predatory presence and send clear signals to the unwanted visitors.

“You can then start to reduce the days the falcons are flown, but are still maintaining a presence,” says Mr Lester.

“Land-fill sites have major problems with gulls and it’s the most proven method of control. We’ve tried all sorts of other ways of dispersing these birds – pistols and kites – but nothing works as well as the falcons.”

In addition to flying the falcons over the area being targeted, gull distress calls are also used. The aim is to create a “distress situation” for the gulls.

When gulls hear the alarm call it attracts them to that particular area of the site in search of the gull they perceive to be under attack.

“Because the bird doesn’t exist, the flock will begin to panic and then disperse for fear of a falcon attack. So the distress call is a valuable back-up to the falcon strategy,” says Mr Lester.

Where free-range poultry flocks have problems with visiting seagull flocks it’s important to initially apply constant pressure by flying falcons every day for about a week at least to disrupt the pattern of behaviour.

We asked three free-range egg producers if they would be interested in using this method. All three said that seagulls were a big problem on some farms – especially as they mix with migratory waterfowl and can therefore spread avian influenza.

Buzzards and red kite are also a growing threat as predators.

They agreed that falcons could be a “useful weapon in the armoury”, but would need to be used with caution. Free-range hens were less likely to be spooked by falcons than hawks, but it might be advisable to keep them housed in the first instance, or to use the falcons in adjacent fields to see if that worked.

Poultry flocks targeted by raptors can also be protected by a range of deterrent tactics – and that includes using trained falcons, provided they will respond only to the lure and don’t pose a risk to the poultry.

“If you fly a bird of prey over a certain area the other raptors will back-off. A peregrine flown correctly in this way is a very effective deterrent,” says Mr Lester.

There are various options that can be applied to tackle situations where birds of prey pose a risk to free-range poultry which can include distress calls.

But in game rearing situations, where pheasant poults are at risk from buzzards, there has been some success using dead pigeons or rabbits placed in perimeter locations away from the rearing pens.

This tactic is based on the buzzard’s attraction to a constant food source which serves to draw them away from game birds or poultry that could be targeted.