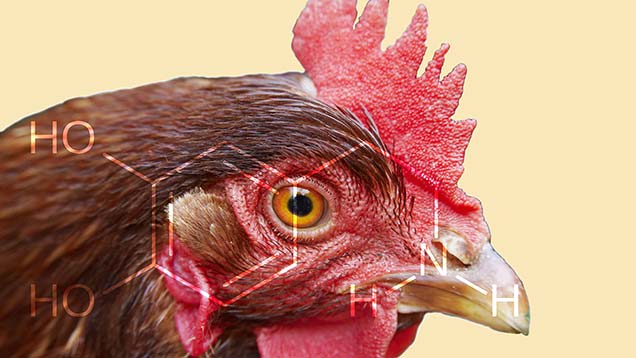 The link between genetic makeup and severe feather pecking is one increasingly being examined by researchers. But what are the principles that might make a bird more likely to peck?

The move from gentle feather pecking to severe aggression in laying hens is multifactorial; its triggers are not fully understood, but certainly it is a combination of management and genetics.

Much focus has been placed on the management of hens and their environment to limit outbreaks of pecking, but a number of genetics firms are looking into the possibility of breeding more docile birds.

A consensus is that a commercial strain is some way off entering production, but what are the principles behind selecting for sedate layers?

There are two chemicals produced within the brain that are thought to influence pecking behaviour, and the chances are that you have heard of them: serotonin and dopamine.

That’s because they are present in our brains as well as those of poultry, and research has linked them with a wide range of things – from sleep quality to sparking romance.

And human disorders, such as the irresistible desire to pick at skin or pull out hair, are thought to be behaviour similar in nature to severe feather pecking in hens.

A thesis published by Marjolein Kops from Utrecht University seeks to learn more about these two chemical processes that occur in the brain and the desire of hens to feather peck.

She explains that serotonin helps regulate, among other things, mood, impulsiveness and aggression, whereas dopamine is involved in motivational and reward-related behaviour.

One study, by fellow researchers, which looked at the effect of depleted serotonin, suggested it could set off the onset of compulsive and harmful behaviours in hens comparable to humans.

Another, in which parrots were administered with a chemical to reduce dopamine production, found they showed signs of less feather pecking.

Nobody is suggesting such a move for farmers in the event of a ban on beak trimming, but it highlights the chemical processes that can influence the behaviour of hens. The next question is how to keep that balance favourable.

It’s well established that incidence of severe feather pecking in a flock has a trigger – often indeterminable stressors that can include diet, environmental disturbances or housing conditions.

But some birds, because of small variations in their DNA, can be more vulnerable to the triggers setting off the dopamine/serotonin receptors and encouraging the onset of severe feather pecking when they reach adulthood.

The difficulty, according to Dr Kops, lies in identifying the birds more vulnerable in the rearing stage. As she highlights in her report, feather pecking is most often measured by a lack of feather cover on the victims – it is much harder to catch the perpetrators.

With this in mind, Ms Kops set out to identify the chemical processes that may have an influence on severe feather pecking. She took white leghorn birds, bred using traditional selection to be more aggressive, and a more docile group.

A series of examinations of the brain of each bird and the distribution of both serotonin and dopamine later, led to a new hypothesis that goes some way to explaining the process by which birds begin severe feather pecking.

Dr Kops categorises different birds within a flock based on pecking behaviour. First is the “first order pecker” – the bird that instigates pecking. These can then influence a “second order pecker” to begin. There are two further categories: the victim and the non-pecker.

The first order pecker is a bird that will be genetically predisposed to peck when exposed to stress, while the second order will begin pecking when it sees the damaged feathers of victims.

There are no practical recommendations made by Ms Kops’ paper. But if her categorisation of layers into instigators, followers and victims were to stand up, then identifying and removing aggressive birds in a young flock could be a way to minimise the risk of pecking.

She insists, however, that this is an initial hypothesis, and further study would be required.

The work will inform breeding programmes, and the methodology, in which the chemical composition of the brains of poultry was assessed, was novel.

Her research fits into a wider series of studies that attempt to link up the causes of feather pecking in a partnership with universities across Europe.

* The above report is an edited summary of the paper “Feather pecking and monoamines – a behavioural and neurobiological approach”, by Marjolein Kops of Utrecht University.