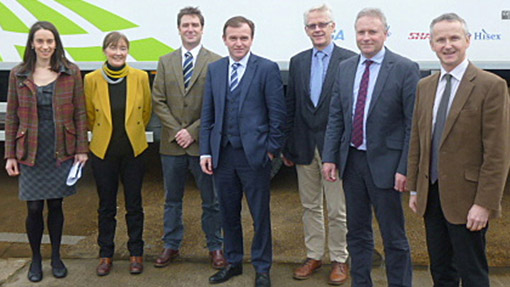 DEFRA farming minister George Eustice has had a first-hand demonstration of Infra-Red Beak Treatment (IRBT), as the industry continues its push for a delay in the planned ban on beak trimming in 2016.

The minister was on a visit to the Joice & Hill pullet hatchery near Peterborough, Cambridgeshire, where IRBT using Novatech machines is standard practice for day-old chicks destined for the egg-laying sector .

As well as seeing IRBT, the minister – pictured with senior executives from the hatchery firm and representatives of the British Egg Industry Council – was also given an update on the progress being made by Joice & Hill’s parent company, Hendrix Genetics, on breed performance and behaviour in its ISA birds.

“The issue of beak trimming is of enormous importance for our industry,” said Mark Williams, chief executive of the British Egg Industry Council, which organised the visit.

“With a possible ban in England in 2016, we feel it is vital the IRBT method is both known and understood by government, and is not confused with the old hot-blade method.

“We do not feel that either the reality of what IRBT involves, or how it is carried out, was fully appreciated when the decision was made in 2010 to again consider a ban on beak trimming.

“We had a detailed discussion on all of the issues relating to beak trimming and would like to thank the minister for making the time to visit the hatchery.”

Mr Eustace recently told the NFU’s annual conference in Birmingham that a ban on beak trimming from 1 January 2016 was still the government’s default position.

But a final decision, to be taken after a review in 2015, will depend on the outcomes of on-going trial work into running layer flocks with their beaks intact, currently being run by Bristol University and the BEIC.

Last November, one of these trial flocks experienced a serious breakdown , with more than 20% mortality, and had to be emergency hot-bladed.

The industry is keen to see a decision taken on the issue of beak trimming ahead of the next general election, expected in May 2015, when a change of government may make it even harder to postpone a beak-trimming ban.

Have you taken part in our search for the industry’s “Greatest”? Please take a moment to fill in our survey .