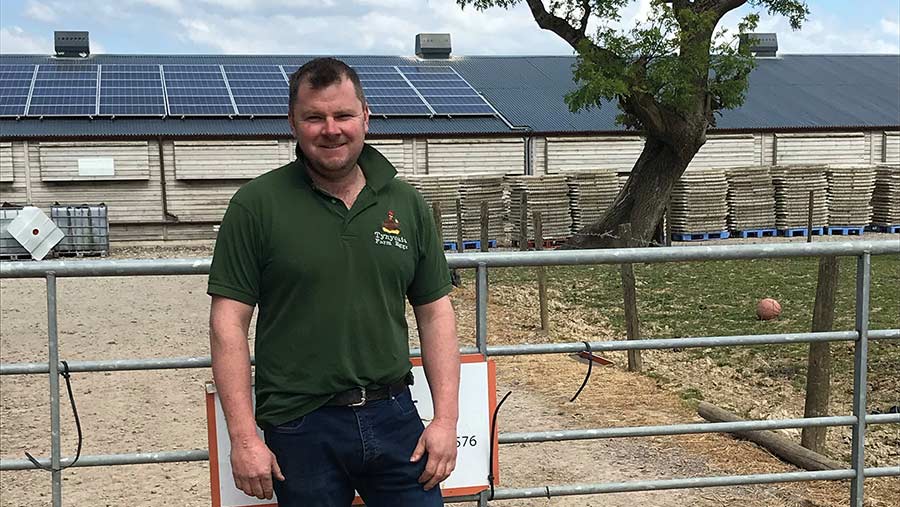 A no-antibiotics strategy to control necrotic enteritis in layers at one Welsh free-range unit has lifted egg production to 4% above target and reduced seconds.

James Ford’s 12,000-bird Hyline flock was hit by a severe outbreak of the gastrointestinal disease necrotic enteritis at 25 weeks.

Although there were few mortalities, egg output at Tynycaia Farm, near Cowbridge, plummeted by 10%.

Mr Ford, a beef and sheep farmer who diversified into poultry production 10 years ago, noted the hens didn’t look healthy and their cones were losing colour.

“It was at the start of a flock cycle, which made it more upsetting because you know you will have those birds for 13 months,” he says.

The disease is caused by the bacterium Clostridium perfringens, which produces a toxin that destroys tissue as it grows in the intestinal tract of birds.

The organism is transmitted by soil, dust, litter and faeces and can be induced by raw material in feed and coccidiosis.

Mr Ford doesn’t know exactly how his flock became infected, but he believes the freezing weather in 2018’s “Beast from the East” put birds under stress, making them more susceptible.

The infection could then have been introduced by wild birds, Mr Ford suggests. 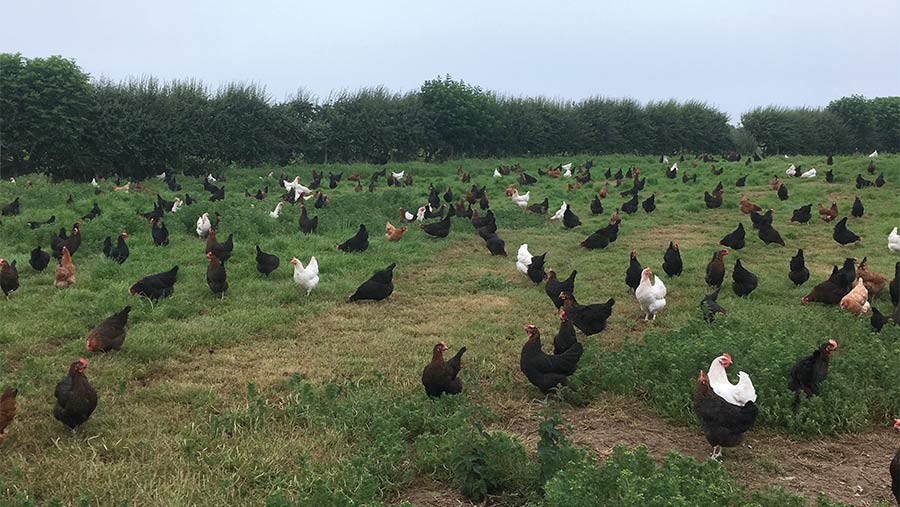 Initially, the farm vet prescribed antibiotics to add to the water supply.

Bird health improved in the first week, but the flock was then hit by a further outbreak of the disease.

But neither Mr Ford nor the vet wanted to rely on antibiotics use long-term.

“Where do you draw the line? Antibiotics cure a problem for a while, but the hens then build up a resistance to it,” Mr Ford says.

Instead, they decided to look at an alternative option.

The approach was to add non-infective bacteria to the hens’ environment.

“I heard about the idea at a farm talk earlier in the year and thought I had nothing to lose by giving it a go – we had to do something or we risked losing the entire flock,” says Mr Ford.

Flock health has gradually improved, but it was not a “quick fix”, as it took a month before there was a noticeable change.

However, by week four of the treatment, egg production had lifted to the target level.

Since the treatment began, the farm has gone from being 10% below target on eggs to 4% above, with 96% of birds in-lay at 40 weeks.

Hens have continued to perform 4% above target at all stages in their laying cycle, and they produce, on average, 30 eggs more per head than previous flocks. Birds are also noticeably healthier.

“A sign of that is that the litter looks good. When we had enteritis, the smell of the ammonia when you entered the shed was bad, but now you can’t smell it at all,” Mr Ford reports.

And, because the hens aren’t fighting disease, egg quality has improved.

During the enteritis outbreak, the farm had a lot of seconds, but is now down to about the 2% mark.

Even though the shed is getting older, which in itself can result in more disease being present, the birds aren’t facing the challenges they were, there are no disease flare-ups, Mr Ford points out.

A mark of how much bird health has improved was during the extreme wet conditions last winter, which challenged all free-range systems.

Health levels were maintained at Tynycaia Farm throughout this period.

“If ever there was going to be a disease flare-up, it would have been then because the range was wet and muddy.

The hens were carrying the mud into the shed, but we didn’t have any problems, we just kept spraying every week,” Mr Ford says.

Importantly, since the treatment has been introduced, the farm has not used any antibiotics.

Mr Ford believes if there are alternatives to antibiotics available for controlling disease, poultry producers should use them.

Although antibiotics are the only treatment that will destroy the bacteria completely, there are alternatives that can suppress infection.

“If we can keep on top of things with spraying, we might never need to use them again.”

How does the bacterial spray work?

James Ford’s approach to keeping his flock healthy is to replace infective bacteria with harmless strains, and in so doing has increased efficiency as hens are laying more and better eggs.

Aled Davies, who studied alternatives to antibiotics in agriculture as a Nuffield scholar, says there is a balance of bacterial types in nature, with each colony jostling for dominance.

An environment is healthy when it contains more harmless bacteria than harmful types.

“There is never a void, there are always bacteria, animals don’t live in sterile environments,” says Mr Davies, of Pruex.

Disinfection risks removing all types of bacteria, sparking a race to repopulate that void.

If that race is won by the harmful bacteria, there is a higher risk of animals contracting disease, Mr Davies points out.

“Good bacteria in cleaning products for surfaces and water systems remove biofilm without creating a void for harmful bacteria to move in.

“This strategy reduces the risk of infective bacteria in the animals’ water and bedding infecting animals and generates lower levels of ammonia and carbon dioxide.”

The chances of infective bacteria then becoming resistant to disinfection and to antibiotics are lower, says Mr Davies.

“If the animals aren’t infected, they don’t need antibiotics,” he adds.