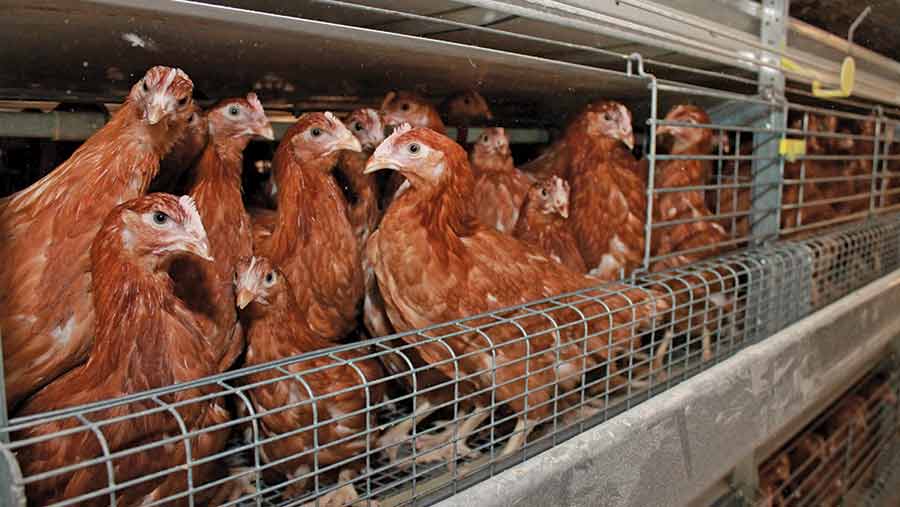 Rearing their own pullets has been a steep learning curve at Kinswood Eggs, but the results so far have been encouraging, as Philip Clarke reports.

Greater control and reduced cost are the two biggest advantages of rearing their own pullets for West Sussex-based egg producers Mark and Sam Beckett.

The father-and son team run Kinswood Eggs, which has been producing and packing eggs for its own and wholesale customers since 1970.

For most of that time, the company has bought in its pullets, splitting the business in recent years between Humphreys Pullets and Country Fresh Pullets. But last year the decision was taken to start pullet rearing on site.

See also: Get to know pullets before they enter lay for top results

Backed by a £500,000 loan from the AMC, the foundations were started in February 2015, with the building completed in September. The Valli cages were installed in October and the first chicks delivered in November.

Those chicks – all Bovans Brown – arrived in the pre-heated shed from the Joice and Hill hatchery at Eye in Cambridgeshire.

In total, there were some 31,000 birds – enough for one of the farms’ 10 colony units. The chicks were already counted into trays of 98, divided into two lots of 49.

“The hatchery had already done the counting for us, which made it really easy to place them into the rearing cages in the right numbers,” says Sam.

Inside the building, the cages are four tiers high and the chicks were initially placed, 49 to a cage, in the middle two rows.

These were then subdivided at about week four, with half the birds going into the top row, and half into the bottom.

The new arrivals were given immediate access to feed and water – “super chick meal” being placed on chick paper in each cage, and the water linked up to bell drinkers on the floor.

After a week, the bell drinkers were removed with the chicks using the nipple drinkers, and at about four weeks, the diet was changed to a “chick starter meal”.

The shed environment is controlled by an Orion computer system, which ensures the birds enjoy optimum temperature and airflow.

Having started at 33C, the shed temperature was reduced by about half a degree a day, to reach 22C by the end of the first month.

There are four sensors in the shed and heat is provided by two LPG-fired burners – one at each end of the 50m building.

Ventilation is determined by body mass, rather than by air temperature, to account for the fact that the birds give off more heat and require more oxygen as they get bigger.

“This is all done automatically, with the control system set up according to the breed standard,” says Sam.

“But we also weigh the birds routinely and found that we were actually well ahead of target weight, so we tweaked the computer accordingly.”

One of the most crucial aspects of pullet rearing is lighting – and having total control of this enables the Becketts to produce the type of layers they want for their set up and their market.

“Like most rearers, we start off with 24 hours of light for the first two days, then reduce it until we get to 10 hours. But we do this much slower than most, getting to 10 hours after about six weeks, rather than three or four weeks.

“This is because we want bigger eggs when they come into lay. Our market is mainly for large and extra large. Our customers don’t want as many smalls or mediums.”

Even once the birds are moved to the laying sheds, they will be kept on 10 hours’ light a day until they reach 1,540g, even though this will delay the onset of lay by up to two weeks. Thereafter, light will be increased by half-an-hour a day until it gets to 15 hours.

“Modern birds seem to have had the ability to produce larger eggs in late lay bred out of them,” says father Mark. “But that’s what we want.

Our biggest issue is bodyweight. Bought in birds are often laying like the clappers when they weigh just 1,750g and we can’t get them any bigger.

Our own birds are already about 200g ahead of standard and our aim is to keep them growing throughout the start of laying until they achieve a full adult weight of 1,850g-1,900g.”

Another area where the Becketts now enjoy greater control is in vaccination.

This is overseen by Crowshall Veterinary Services and follows a fairly standard programme, starting with vaccination for Gumboro, Marek’s and infectious bronchitis in the hatchery, three salmonella treatments in weeks one, six and 15, and a variety of other treatments during the rearing period.

With bought-in pullets there is also a need to vaccinate for Micoplasma synoviae at 12 weeks, as the Kinswood Eggs site is positive for this disease.

“MS has been a problem for us in the past, and the layers would typically show a reduction in egg output about four or five weeks into lay,” says Sam.

Vaccinating with the MS-H vaccine is an expensive procedure, as each bird has to be treated with an eye drop, adding about 24p to the pullet cost.

But rearing on site means the birds have already converted to MS-positive and developed a natural immunity, so will not need to be treated. Sam will monitor the flock’s performance during lay.

Most of the treatments, which are either administered in the water or by a vacuum-powered sprayer, have been given by Sam and two of his staff, following initial training by Crowshall vets.

A final vaccination – a multiple vaccine covering infectious bronchitis, Newcastle disease, egg drop syndrome and rhinotracheitis – will be injected into the upper leg of each bird by an experienced team from Animal Aids.

The first flock to be home-reared is due to be moved to one of the laying houses in the first week of March at 15 weeks, following depletion of one of the laying flocks in mid-February and a two-week cleanout of the shed.

A team of about 16 staff will move the birds over three days, using 12 modules that have been bought for the job. Three specialists will be involved in injecting the final vaccine.

The plan is that the rearing shed will produce up to three flocks a year, whereas the farm consists of 10 flocks, with once flock depleted every seven weeks.

This strategy ensures the supply of eggs is fairly constant – essential as the business has its own customer base, rather than selling to another packer.

With an annual demand for about 250,000 pullets, Humphrey Pullets and CFP will still be providing the bulk of the site’s pullets in the medium term.

But, so long as the first few home-reared flocks perform satisfactorily, the plan is to put up another rearing shed up next year, with a third shed a distinct possibility.

“The big advantage of rearing our own pullets is that it gives us control,” says Sam. “The slower step down in lighting is a good example. Also, we see the birds every day, so if we need to change something quickly, we can. I still always go to look at the pullets that others may be rearing for us, but it’s not the same.”

The other advantage is cost (see table). Latest estimates put the cost of rearing their own at just £2.62 a bird, compared with £3.80 for a bought-in pullet.

That is before the cost of the building, but based on 90,000 birds a year and a £1 a bird saving, Sam estimates that the borrowed capital will be paid off in about seven years.

On top of this, by breeding birds already acclimatised to the unit’s particular conditions, the Becketts reckon they could get an extra 1% yield from their home-reared stock, worth an extra £15,000 in revenue.

The project has been funded by a £500,000 loan from the AMC for the building and equipment.

The loan is for 15 years, with fixed interest for the first five years. It can be paid off in full at any time after five years with no penalty.

“It’s unknown exactly how much we will realise from this move, so the flexibility is really valuable,” says Mark.

The newest shed was one of the first in the country to be run as a colony system, with the other sheds all converted in 2010 and 2011. “It was quite a juggling act, as we still had to keep our customers supplied while taking out two flocks at a time,” says Sam.

The farm is currently stocked with a mix of Lohmann Brown and Bovans Brown birds. “The Lohmanns are good for shell colour, but the Bovans have better persistency. We aim to take them on to 84 or 85 weeks.”

Feed is supplied by Humphrey Feeds and Lloyds Animal Feeds, with each company supplying about 150t a week.

The eggs are collected daily and transported by lorry the short distance to the packing centre, where a Selecta grader churns out 1,000 cases a day.

The eggs go under the Laid in Britain quality assurance label, and are sold either to other distributors – many of them ex-egg producers themselves – or on Kinswood’s own egg round in south-east England.

The business has about 50 staff on the payroll – full-time and part-time – including five flock managers, seven on-farm packers, 15 in the packing centre and five drivers.

A 300kW roof-mounted solar installation provides about half the site’s electricity requirements.