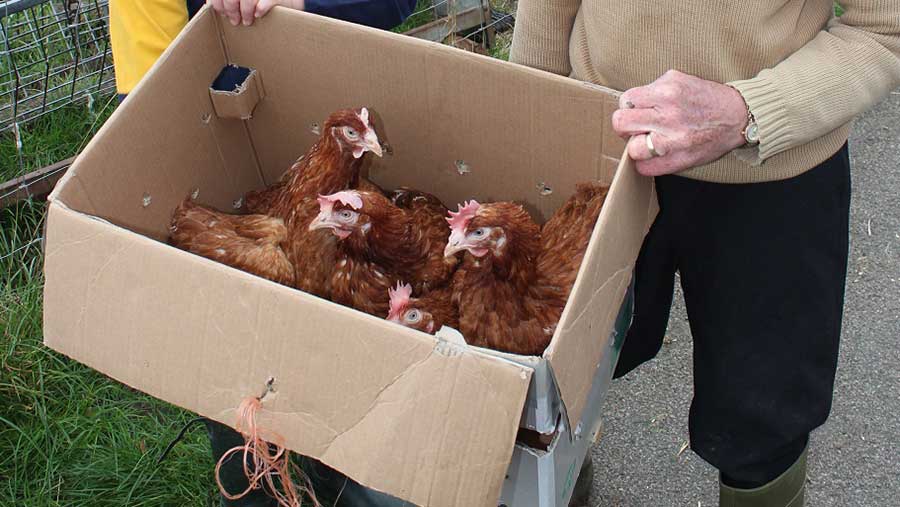 The depressed market for spent hens has persuaded one Leicestershire egg producer to sell his old birds over the farm gate, rather than sending them to slaughter, in the hope of getting a better return.

John Terry runs a flock of 5,000 free-range birds at Oak Tree Farm, Higham-on-the-Hill, near Hinckley, and his latest flock has reached 74 weeks old, at which point they are normally depleted.

“We change flocks at this age because our customers don’t like eggs with light-coloured shells or those that are misshapen”, says Mr Terry, a former schoolteacher who is also well known in sheep-showing circles.

“It’s a pity they can’t sell eggs from older birds. I know their shells can become brittle, are more prone to hairline cracks and can be oddly shaped, but there is no reduction in nutritional value.

“The customer still takes the eggs, but only pays 20p/doz [for breaking] instead of an average of £1.10/doz.”

Under current market conditions, the birds are only worth about 15p each as spent hens. But sold to the general public he is getting £2.50 each.

This is the second time Mr Terry has sold his old layers. “We advertised them in 2014 and sold about 1,000, with the rest going for slaughter.

“This year we are hoping people will buy more. The hens can continue laying for several years. They may not produce the 300 eggs they do in their first year, but they will lay nice, big eggs.”

His latest offer has seen enthusiastic support, with buyers coming from as far afield as Kent and Doncaster to buy birds.