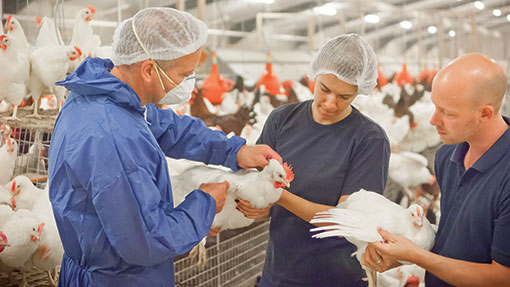 Switching from broiler breeders to layer breeders has been a steep learning curve for one Suffolk family, with as many differences as overlaps, as Philip Clarke discovers

Stephen Hart and his two sons, George and Richard, have kept layer breeders for almost a year.

In fact they are still into their first flock of parent stock, managed on contract for hatchery business Joice and Hill at their Goslings Farm, north west of Ipswich.

But the family and business partners have a strong background in poultry breeding, having been broiler breeders for Cobb since 1977. “We started off with two sheds and soon expanded to four, producing eggs for the hatchery in Norfolk,” recalls Stephen. “We had a good relationship with Cobb, but then they decided to move much of their production to the Midlands, and we were served notice.”

Eager to keep the poultry business on, they considered a number of options, including switching to another hatchery, going into commercial broiler production and even producing ducks for nearby Gressingham Foods.

“One of our main objectives is to provide employment for the whole family and the fact that breeding is quite labour intensive is a big plus.”

The Harts were also keen to stick with a relatively risk averse option, to fit in with their 260-acre arable enterprise. “We spoke to Joice and Hill and found that the contract pretty much replicated what we had with Cobb,” says Stephen. “We provide the sheds, the equipment, the insurance and the labour. They provide the chicks, all the consumables and pay us a set management fee per square foot every month. This is a more comfortable option for us.”

But while the contract reflects what they had before, and many of the farming practices between breeding broilers and breeding layers are similar, there are also some clear differences.

“One of the biggest is the size of the birds,” says Stephen. “With broiler breeders it is a constant battle to keep the weight off them. If they get too heavy, the hens won’t lay and the cocks are so big they won’t mate. This is not a problem with layers. They have a completely different set of genetics and sometimes getting enough food into them can be a challenge.” 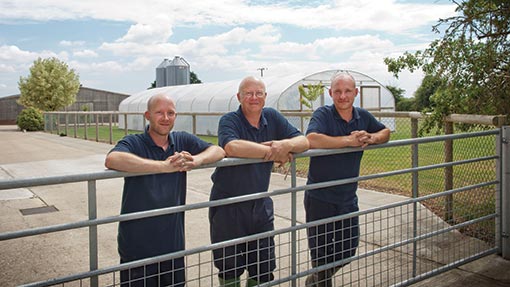 This is evidenced by the lower feed intakes. The ISA Warrens that occupy one of the four sheds at Goslings Farm average 125g of feed a day – and that’s including the males which eat about 50% more than the females. Broiler breeders would consume more like 160g a day.

Son George also points to the increased egg production – these birds are designed to lay eggs anyway, and there are more of them in each shed. “This certainly adds to the workload in terms of the time it takes to collect eggs off the conveyor and load on to the trays and trolleys,” he says. “But there are time savings in other areas.”

In particular, there are far fewer floor eggs with layer breeders, which are more adept at finding their way into the nest boxes. Generally, layer breeders produce less than 1% floor eggs, compared with over 10% for some of the broiler breeders the farm has hosted in the past. Even so, each building has a low-level electric wire around the walls, to dissuade the birds from settling there to lay in the first few weeks.

Another difference, says George, is the quality of the litter, which tends to be drier than with broiler breeders. This he attributes to the fact that layers have ad lib access to feed, whereas with broilers they were restricted to two feeds a day. This meant the broiler breeders spent more time playing with the drinkers, resulting in more mess on the floor.

“We spend far less time topping up with fresh litter,” he says.

The change to layer breeders has involved a fair amount of investment at Goslings Farm, not least in feeding equipment.

“We used to have three separate pens in the two larger sheds, as we had to do separate lines for Cobb,” says Stephen. “We also had to feed the females and the males separately, which took a lot of management.”

Moving from controlled feeding to an ad lib systems has meant dispensing with the old bell feeders and putting in toughs with belt drives in all the sheds. The slatted area has also been increased from one-third to two-thirds of the total floor area, as the new feeders are on the slats, unlike the old bell feeders, which were at floor level.

Everything in the sheds – the slats, nest boxes and conveyors – has also been raised from a height of 18in to 24in off the ground, to allow for the build-up of manure under the slats over the flock’s 72-week lifespan. 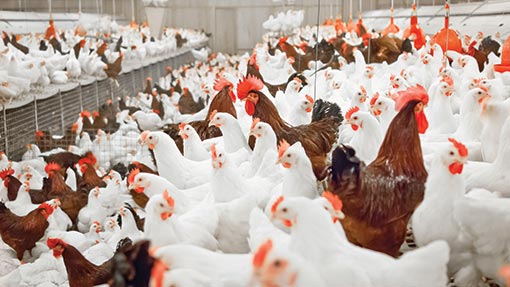 One thing that has most definitely not changed between the new layer breeder and the old broiler breeder set up is the keen focus on biosecurity. “Visitors are kept to an absolute minimum and have to be authorised by Joice and Hill,” says Stephen.

There are “shower in, shower out” facilities at the single site entrance, and beyond that it is black boots for outside, green boots for inside, with covered Hysolv Footcheck foot-dips outside the entrance block and each of the four sheds.

The entire site is fenced, and there are rodent bait traps at numerous strategic points, which are checked and recorded weekly.

Between flocks, all moveable equipment comes out and the manure is removed and stored on farm for use on the arable ground. The equipment and buildings are washed, disinfected, reconstructed and then fogged to provide the most hygienic environment possible for the next flock.

The two older, smaller sheds were each occupied by about 3,000 British Blacktails, achieving 80% hatchability, with excellent feather cover.

Having a mix of breeds gives Joice and Hill more flexibility when trying to match variable customer demand, though the plan with the next intake at Goslings Farm is to ensure they are all of the same age.

All parent stock arrive as day-old chicks from France or Holland and are delivered to one of three Joice and Hill rearing farms in Norfolk and Lincolnshire. The female chicks are beak trimmed using infrared beak treatment, while the males are left with their beaks, claws and combs. They are reared in sheds very similar to what they will find on the eight breeding farms they may be destined for, with scratch areas, slatted areas and perches.

The pullets go off to the breeding farms at 16 weeks, by which time they are on a 12 hours a day lighting. The birds are stocked at nine females per sq m, equivalent to 65 birds per nest box – higher than for broiler breeders. Up to10% males are included, though this percentage can be reduced to as low as 8% as the flock ages. Joice and Hill determines this, based on hatchability data.

Lighting is adjusted more gradually than in a commercial laying environment, increasing in line with bodyweight gain and production from weeks 19 to 23, when they will be on 16 hours a day. This is somewhat different to a broiler breeder set up, when the lights won’t be on fully until week 30. 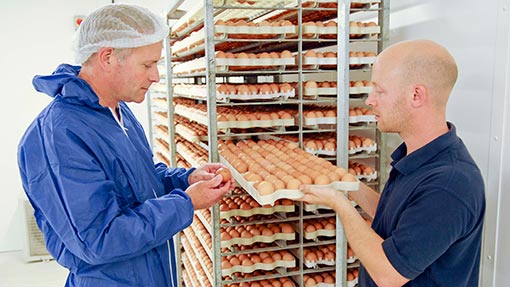 Most of the parent stock will have come into lay by week 20, but the eggs are not sent to the hatchery until week 24, as they will not have reached the required minimum weight of 52g, so would not be producing viable chicks. Instead, the eggs during those first four weeks are collected and sent for processing.

Feed is supplied by Joice and Hill, with just three standard diets on offer: Breeder 1, Breeder 2 and Breeder 3. All breeder flocks will start on Breeder 1, but the specification will change based on laying performance, hatchability and egg size, which are closely monitored at the hatchery.

The parent birds are kept in lay for 72 weeks – standard for commercial layers too – though the plan is to extend this. “We used to have a 68-week laying period for our breeders,” says Joice and Hill’s Stephen Turner. “But greater persistency in commercial flocks means we are also looking to keep our breeding flocks in lay for longer.”

Egg weight profile pretty consistent in layer breeders, averaging 62-65g per egg. “We select for higher earlier egg weight, and then for it to plateau for the rest of the laying period, to ensure a more even chick size.”

The aim is to get one live female chick for every 2.65 fertile eggs laid, after allowing for 50% male chicks and culls.