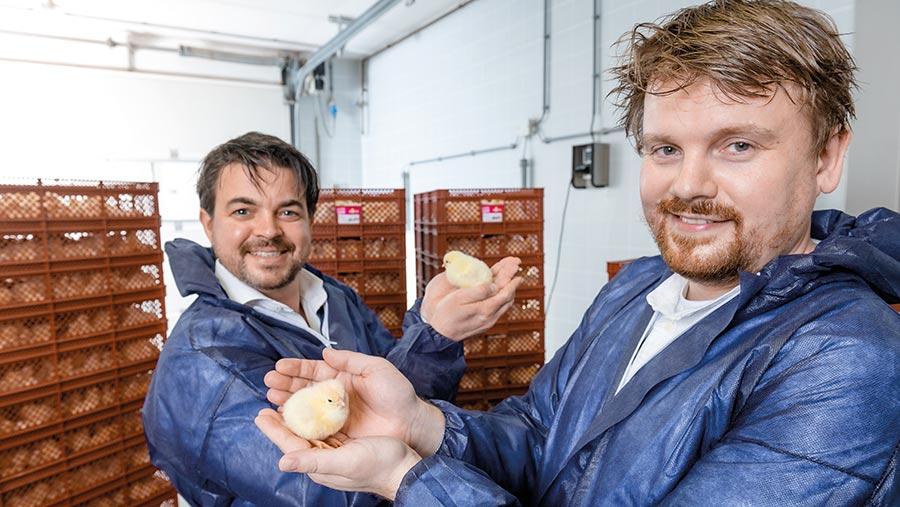 Every year 6.5 billion male chicks are culled worldwide. Hatched into the egg production sector, they have no value because the unsuitability of layer breeds for meat production makes them unviable.

In the UK, gas killing or instantaneous mechanical destruction (IMD) are classed as acceptable and humane methods of male chick destruction under sector regulations.

But the stakes have never been higher for the UK – a leader in animal welfare – and the killing of male chicks is now raising ethical concerns throughout the food chain.

Across Europe, and beyond, there have already been landmark changes to policy with the development of biotechnologies to determine the sex of a chick in-ovo (within the egg).

France has followed suit, with hatcheries to be supported by about €10m (£8.4m) of funding for in-ovo sexing biotech.

For Wouter Bruins and Wil Stutterheim, the ethical problem of male chick culling and the business case for a solution became apparent while studying for a Masters degree in 2011 at Leiden University in the Netherlands.

“We were tasked with leveraging the university’s scientific and technical expertise to develop a project with a strong business case,” explains Mr Bruins. “At the start we knew nothing about chickens.”

It was while exploring market gaps that they looked at the poultry sector.

“We spoke with various key stakeholders, including producers, who expressed it was uncomfortable that for every hen there was a male chick killed and that a commercially viable solution would be welcome,” he says.

Together the pair came up with a concept using biomarker detection and biomedical technology to sex chicks in-ovo on a production scale.

“The scale of hatchery production means that it operates using factory processes which require high levels of efficiency, so we had to develop the scientific methods, technology and protocols to match that,” says Mr Bruins.”

In 2013, the duo founded their company, In Ovo. Their first breakthrough, in collaboration with Leiden University, was identifying a novel biomarker for gender in the allantois fluid of the egg.

Employing the expertise of Dutch engineering company Demcon, they were able to develop a precise and automated sampling method that could safely extract tiny amounts of this fluid from the egg.

In 2019, their first in-line and fully automated machine, Ella, was commercially placed in the Netherlands.

Ella is able to screen both white and brown eggs for gender typing. So far, In Ovo has developed three versions of Ella – the latest of which provides more than 95% accuracy to enable the hatching of five million hens a year.

Although technically advanced, the process of sexing, separating and incubating is relatively simple. Incubator trays containing 150 eggs each enter the machine, which then scans eggs individually, positioning each correctly for sampling. 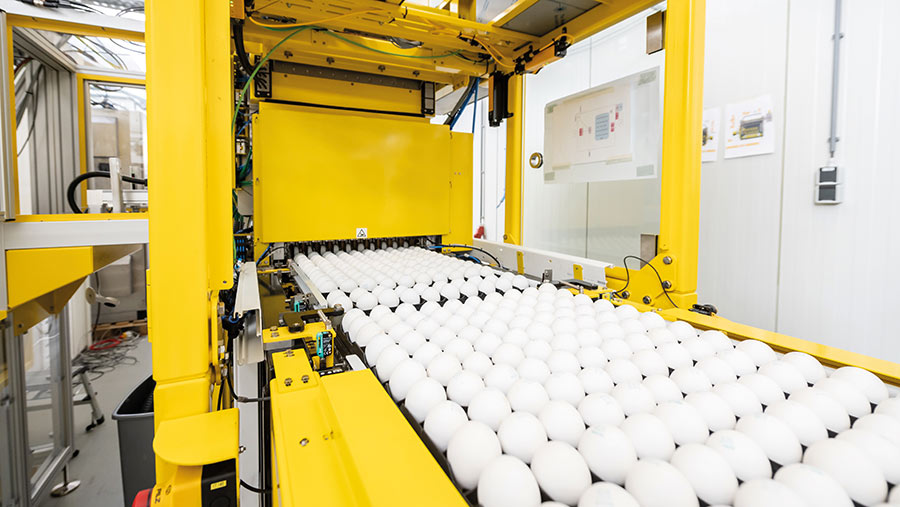 A sterile needle makes a small hole in the egg and takes a drop of allantois fluid, sealing the hole immediately with glue.

It places 380 samples onto a plate and uses mass spectrometry to screen for the biomarker.

“Research and development has enabled us to bring down standard mass spectrometry time from 20-60min to less than 1sec,” says Mr Bruins.

“Eggs are screened at day nine, when the brain stem of the developing embryo has not yet closed, meaning they are not yet classed as sentient,” he adds.

“It’s a sensitive subject, but we shouldn’t shy away from it. We’re continuing to work on being able to screen earlier. We’d like to get to day zero, which will strengthen the welfare impact as well as improving efficiencies for the hatchery.”

So is this biotech commercially viable and how soon could it instigate change? Mr Bruins says the answer is relatively quickly. “Every country in Europe only has a small number of hatcheries – the UK, for example, only has three or four,” he explains.

“So it would only take a small number of machines to make a widescale impact and end male chick culling within the UK.”

A high capital requirement makes leasing a more viable option than purchase at this stage. “Leasing means the hatchery is able to implement the technology that suits its specifications at a viable cost – paying on a per test basis.”

On average, the screening process adds about 1.5 euro cents (1.26p) an egg to the retail price. “Egg prices range from 15-50c (13-42p) an egg and consumers in the Netherlands often can’t tell you what they are paying for eggs,” says Mr Bruins.

And buying choices are now more driven by perceptions of welfare. “Where there is improved welfare, consumers are paying up to three times more for their eggs.”

What are the savings?

Despite the higher costs, there are financial and environmental benefits, including less resource use with male eggs no longer requiring incubation to day 21 and no need for manual sorting.

And that extends to those who rear cockerels as meat birds – as they are not bred for meat production since they are very inefficient.

Working on a lifetime egg yield of 350 eggs a hen, the margin equates to €5.25 (£4.40) a bird from which all stages of egg production and retail would need to extract value.

“Margin needs to be fairly distributed through the food chain – it’s very important there are protocols in place that ensure the producer receives added value for their eggs,” says Mr Bruins.

“In Germany, we are seeing good prices agreed between retailers and producers – policy change and consumer demands mean no retailer wants chick culling so they’re paying a premium for ‘no cull’ eggs.”

How the ethical arguments stack up

In-ovo sexing is a worthy cause from an animal welfare perspective, according to Vicky Sandilands, senior behaviour and welfare scientist at Scotland’s Rural College. “Any improvements to animal welfare are a good thing.”

So how well does it address the ethical problem? Dr Sandilands asks: if death is painless, does it matter at what point it occurs? What’s the difference between culling day-old chicks and 80-week-old layers?

In the UK, day-old male chicks are dispatched by gas and provide a valuable food source for zoo animals, captive birds of prey and some pets, says Dr Sandilands.

If male chick culling is banned, where will this food source come from? “For example, more mice might have to be bred to fill this gap – but it’s still breeding to kill a young animal,” she says.

“We also have to consider the environmental impact; will breeding more mice require more resources than chicks, which are already part of a process?

“Animal welfare is paramount, but we have to look at the bigger picture and make sure we’re not trading off one concern for another – ethically and environmentally.”