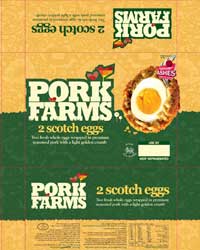 Manufacturers of Lion Egg Products are embarking on new marketing campaign with the aim of capturing a greater share of the UK egg products market, which accounts for nearly one-third of all eggs consumed.

“It is a growing market,” said Ian Jones, vice-chairman of the British Egg Products Association, which is a producer of Lion egg products.

“In the USA, this is well on the way to 40% and there is no reason why it won’t eventually reach the same level in the UK.

“For example, Marks and Spencer sells about four times more eggs in the form of egg products used in the manufacture of foods like quiches and yorkshire puddings than shell eggs.

“When you look at the total Yorkshire puddings market, about 200t a week of egg products are used in their manufacture, equating to 4m eggs each week.”

One key change in the past two years is the growing interest in Lion egg products, says Kevin Coles of the British Egg Information Service.

“Retailers have been specifying Lion in shell eggs for some years on the back of the successful Lion marketing campaigns. But now they are starting to make the connection with egg products.”

One key benefit with using Lion egg products, said Mr Jones, is the knowledge that the standards minimise risk. “For example, there is no EU standard for the temperature or duration of heating when pasteurising eggs. However, the Lion code has its own stipulated standard.”

Not all egg products are produced to the same standards and safety is of particular importance. The Lion mark guarantees eggs produced to a wide-reaching Code of Practice. But despite this, imports account for one-third of egg products used.

A recent survey carried out by the British Egg Information Service found that consumers assumed food manufacturers used British eggs. When asked what was important to them, topping the list was “eggs that meet required standards”. Also scoring highly was “eggs being British”.

Then when asked if they would still buy the food product knowing it was made using imported egg products, 40% said they would not.

As Mr Coles stressed: “The message to manufacturers is that there is a positive score for using Lion and if you don’t, consumers don’t want to buy your products.”

Mr Jones added: “On top of this, there is a perception that as egg products are pasteurised, they are fully safe. But feed can be a source of contamination and there have been significant scares overseas in recent years, such as dioxins.

“That is why control of feed is at the heart of the Lion egg products code.”

So to gets its message across, Lion Egg Products is planning to spend £150,000 on marketing in 2009. Lion Egg Products Producers recently sponsored a newsletter in British Baker and is in the process of redesigning its website to promote Lion egg products.

This month also sees adverts in The Grocer magazine aimed at bakers and other users of egg product promoting the reasons why they should use Lion. And later in the year, Lion Egg Products is sponsoring the British Baking Industry Awards.

“Egg products are a major ingredient and the industry should be more visual in promoting itself, ” said Mr Coles

Progress is already being seen with Pork Farms announcing last month that it is to carry the Lion logo on its packaging and Lion Egg Products processors hopes others will soon follow.

Lion egg products only use Lion eggs, so are fully traceable and produced to high standards of hygiene. Furthermore, they can be traced back to the laying flock, reassuring consumers.