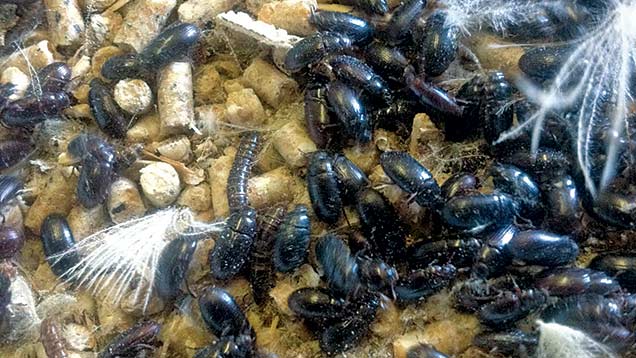 Broiler and layer units across the UK are increasingly suffering from litter beetles, causing considerable damage to buildings and posing a serious disease risk.

According to Alison Colville-Hyde, field services manager at St David’s Poultry Team, the past 18 months have seen a real population explosion.

“We’re not really sure why there’s been such an increase,” she says.

“They’re tropical beetles so prefer warm temperatures – perhaps the popularity of biomass boilers means farmers are heating their sheds for longer, or maybe producers haven’t been able to kill them successfully so numbers have become out of control.”

Each female beetle can lay hundreds of eggs in a broiler production cycle, leading to thousands of offspring in one generation.

“The next generation could therefore be over a million, so the population can grow incredibly quickly.”

And because they live in these areas, it can be extremely difficult to kill them due to poor access, meaning potential carryover of diseases from one flock to the next.

A female beetle lays up to 800 eggs during her lifetime, with the lifecycle speeding up in warmer temperatures and slowing in the winter.

Within a broiler crop cycle eggs are laid in clusters, which hatch into small worm-like larvae after four to seven days, commonly known as mealworms.

Larvae are found in large numbers in the litter, where they transform through several stages into a black mealworm about 7mm long.

At this stage the mealworms seek out favourable locations to pupate, typically within insulation and under equipment or bales within the broiler house.

The adult beetles, which are 5-6mm long and can survive for up to two years, then emerge into the building ready to continue the lifecycle.

As a result, Ms Colville-Hyde has spent a lot of time researching litter beetles and effective control methods.

“The beetles behave differently in different building environments and house designs, so you need to have a bespoke strategy for each farm and sometimes individual sheds.

“You can’t just spray the walls with insecticide and assume it will work, because more often than not it won’t.”

Fortunately, insecticides do work when used in the right dosage at the correct time and with the recommended application technique.

Some insecticides will work on every stage of the beetles’ lifecycle, while others are targeted.

“Unfortunately, some farms are using the wrong strength, or mixing the insecticide with disinfectant, for example, which renders application useless.

“The insecticide has to be sprayed onto a dry surface otherwise efficacy is lost – producers are investing £1,000s on chemical applications which are often not working effectively.”

To find the beetles Ms Colville-Hyde recommends going into the sheds and looking under bales or feeders, as the beetles like dark areas.

Although they need moisture they can’t burrow through wet litter, and tend to stick to dry litter areas, into which they will quickly disappear when the lights come on.

“I’ve heard of incidences where they’ve burrowed out huge cavities under floors, so if you have any cracks in the dwarf walls or floor, fill them in to disrupt their optimum environment.”

By identifying where the beetles are living during the production cycle, farmers can then target treat and trap them both during the flock and during clean-out. “We have imported beetle traps that are working really well, and we now have distribution rights in the UK,” she says.

“The traps are set, containing some poultry feed and, if possible, some beetles. These will give off pheromones which attract other beetles, and once the trap is full you empty the contents into a bag and kill them by placing into a freezer.”

Ms Colville-Hyde suggests using the traps in combination with targeted chemicals in rotation, as well as sealing up cracks in buildings.

“The important thing is to act quickly, because they are going to affect your production,” she says.

“The beetles will also be eating your feed, causing irritation to the birds, damaging your house and transferring disease. They may be hidden, but you do need to manage them carefully.”