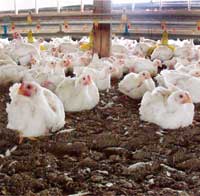 A flooring system for broilers from the USA that dispenses with the need for litter is now making its debut in Europe. Ken Randall reports

Removal of the excess moisture from poultry manure that leads to ammonia production and emissions from sheds is one of the claims being made for the new AviHome plenum system, a rigid structured flooring made from engineered polymers.

The term “plenum system” means that it features an air space within the floor, allowing circulation of air to dry the manure, while providing thermal insulation from the ground.

The concept was developed in conjunction with the University of Maryland Eastern Shore with grant support from the US Dept of Agriculture and other organisations, with the intention of offering solutions to the environmental issues related to intensive poultry units.

It is said to offer a number of benefits in addition to reducing ammonia, including reduced heating and ventilation costs and faster growth performance, leading to a significant improvement in feed conversion.

And, at clean-out, because of low pathogen loads, it is claimed birds can be placed much sooner, increasing the number of flocks per year.

The lower moisture content of the manure also reduces the potential development of bacteria and moulds, thereby creating a healthier environment and minimising the risk of respiratory disease, according to the manufacturers. “By improving bedding conditions, bird health is more robust and less sensitive to poor management,” the manufacturer claims.

Incidence of foot-pad dermatitis can also be reduced (see table).

So far, there have been a number of small-scale laboratory trials, followed by two on-farm trials with a commercial integrator, involving 33,000 birds in total. All testing was performed independently by the University of Maryland.

According to the manufacturer, the trial building is recognised as one of the driest houses in the region, with low dust levels and an absence of darkling beetles commonly found in US units.

One of the trials was conducted in the “poorest weather conditions possible”, with chicks being placed after a blizzard. The majority of weather was cold and rainy, with a lot of flooding in the locality.

The top tile of the system creates a permanent surface and is perforated to facilitate downward wicking of the moisture from the droppings.

On the lower panel, conical supports can withstand heavy loads, and the pieces interlock to create unobstructed channels in the ventilated plenum underneath the birds.

Jeannine Harter-Dennis at Maryland reports that the system was developed to reduce ammonia emissions by attempting to accelerate the drying process and thus eliminate the need for litter.

“However, it became evident shortly into the project that, while the system did indeed reduce ammonia production, it was the result of controlling manure pH.

“In addition to reducing ammonia emissions, advantages to using the system include improved weight gain in the range 5-15%, and a gain of 2-6% in feed efficiency.

“Although not measured, dust levels were dramatically reduced in the commercial flock grown during the winter. This will improve bird health as well as grower health.”

The flooring comes in two pieces, comprising a permeable top tile, supported by a structural bottom tile that creates the air space in the floor. It is designed to carry the usual heavy equipment, such as mounted fork lifts and skid-steers that are typically used in broiler sheds.

Rob Shaw, who is representing AviHome in the UK, explains that the flooring system can either be designed into a new build or retrofitted to an existing shed. “For a new-build it is more expensive than a plain concrete floor, but there are real financial benefits,” he claims.

It should be adaptable to any existing house, he adds. “For an existing shed, it is easy to fit, you simply lay it on the concrete.”

The first European house is now being installed on a trial basis in Italy. “Several UK integrators are currently taking an interest in the system,” Mr Shaw claims. “The (US) tests have shown that grow-out time is reduced by three to seven days, depending on breed and management.”