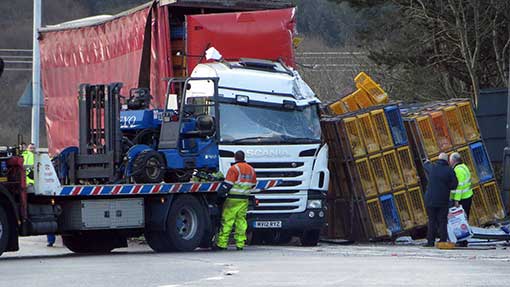 A wagon carrying about 3,200 chickens on Anglesey, North Wales, tipped over on a motorway slip road in the early hours of Monday morning (3 February).

The lorry was travelling on the westbound slip-road of the A55 near the Britannia Bridge, on Anglesey. The cause of the crash has not yet been identified, but investigations were ongoing, according to a North Wales Police spokesman.

“At approximately 5.50am a member of the public reported a wagon heading westbound on its side,” he said, adding that traffic was severely disrupted in both directions as officers oversaw the righting of the truck using a crane, as well as tending to the birds, crated up in the lorry.

The road was eventually cleared at about 2.30pm the same day and the driver was uninjured.

An AHVLA officer attended the scene of the accident, and a small number of birds were dispatched on welfare grounds at the scene. Once the lorry had been righted, the remaining birds were transferred to alternative transport and continued their journey, a spokesman said.