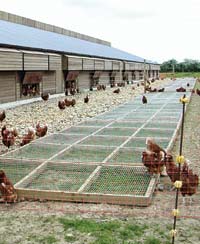 The changing seasons have a big influence on bird health and welfare, as Richard Allison discovered at a recent producer meeting

The cool, temperate climate in the UK means that free-range egg farmers could be better off adopting a cold litter system.

Speaking at an ADAS-organised seminar near Andover, Hampshire, Justin Emery highlighted that with free-range housing, warm litter systems only work in periods of dry, warm sunny weather. “Warm systems don’t come easily and you could end up struggling on with a system that doesn’t suit your housing.”

When litter is working, it is well aerated, dry and friable. It breaks down faeces and the process is self sustaining through bacterial and fungal action, assisted by the birds.

Warm litter systems are effectively systems that work well in broiler and barn units where producers have full control over the environment and ventilation. But they can struggle in free-range housing, where full control is not possible because of the pop holes.

Consequently, during cold, damp weather, you get chilled litter which can become wet and capped through compaction.

He suggested that producers struggling to maintain a hot litter system should consider opting for a cold system instead. In these systems, litter has a high moisture content and the low house temperature means there is little composting activity and poor aeration.

Therefore, it relies on regular additions of bedding material on top to keep birds dry and removal of wet litter where necessary.

Whatever system producers opt for, a key factor in maintaining good litter is minimising water loading on litter and conserving house temperature where possible.

One route for water is from the range on birds’ feet. An area of gravel or slats outside the pop holes will help, as will covered verandas and wind breaks, by protecting pop holes from the weather.

Seasonal changes cause more feather loss on free-range birds than any other factor, according to independent poultry consultant and adviser to Humphrey Feeds, Mick Dennett.

In a sustained cold period, the maintenance energy requirement of birds increases and they compensate by eating more feed. But this leads to increased egg size, more stress and ultimately feather loss.

This feather loss then exacerbates the problem, as birds lose more heat, further increasing energy needs. If the problem is allowed to continue, then flocks will experience other problems like pale eggs, cannibalism and mortality.

Therefore, Mr Dennett recommends monitoring egg weight at least weekly to identify any problems early. “Weigh mid-morning as eggs in the afternoon will be 1-1.5g lighter. And don’t use the packer’s figures as these will be lighter still.”

The moment you see a 1g difference, then you need to act.

“In summer, you can leave birds on the same diet and the problems won’t occur, as the higher temperature will reduce appetite. But in a sustained cold period, appetite will increase.”

This cold weather feather loss is also a particular problem with late summer reared pullets. The bird’s appetite is suppressed by the warmer temperatures while in rear, so body weights are often below the breed target at the point of lay.

In addition, unless buildings are fully light proof, the longer daylength and high light intensity in summer means these birds will be early into lay. This coupled with the lighter bodyweight means birds cannot support the accelerated physical maturity and egg production, so you see feather loss.

“These flocks typically don’t make a good peak in egg production and they fall off,” said Mr Dennett.

So what do you do if a flock has been affected by a sustained cold-period. For birds beyond peak, Mr Dennett has devised a strategy, which includes reducing feeding to five times a day over 10 days with the first feed soon after lights come on at 6.30am than at fixed times during the day.

Ensure the feed track is empty before the next circuit of feed and then, the feed track should only be covered with minimal feed. Monitor the bird’s reactions and adjust depth rather than give them another feed.

By adopting this, you can avoid the feather loss and cannibalism problems that can arise, he said.