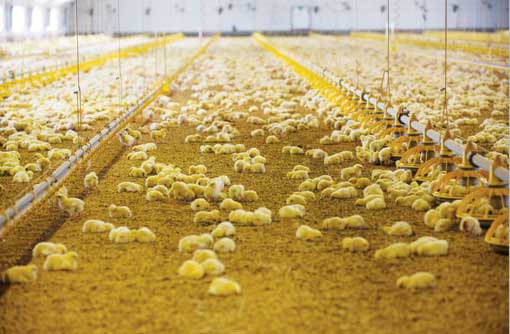 The first week of a broiler chick’s life forms the basis of its health and productivity for its entire time on the farm. In the first of a new three-part series, Richard Jackson of the St David’s Poultry Team, explains how to get the best possible start

A broiler’s life is a race from the moment the chicks are tipped until slaughter.

But while all farmers want their chicks to grow as fast as possible, it is equally, if not more important, to get them to start the race at the same time and to run at the same pace.

If a large percentage of chicks start to eat and drink even a few hours later than their flock mates, then the consequences can be disastrous, with severe unevenness, though this may not become apparent until the birds are 14-21 days old.

Having an uneven flock is a nightmare to manage, both in terms of ventilation and drinker heights. The more uneven the flock, the greater the proportion of birds that will be unhappy with your management decisions. And the more stressed the birds are due to environmental conditions, the more susceptible they will be to enteritis and other such diseases.

In order to ensure the flock is as even as possible there are a number of crucial steps:

• Preheat the sheds three days before placement, so that when the chicks arrive the concrete is 28-29C and the bedding is 32C across the shed. Remember that the majority of the chick’s body will be in contact with the floor, and failure to have adequate floor temperatures will mean the chicks are likely to huddle and will be slower to start.

Chicks at the centre of a huddled group will feed later than those on the edge, leading to unevenness. Furthermore, cold floors can lead to poor intestinal development, which will result in poor nutrient absorption and a bird that is more susceptible to gut health challenges. Equally important is to have even floor temperatures, as chicks that are in cooler areas of the shed will be slower to start and will therefore be smaller throughout their lives, again leading to an uneven flock.

Many farmers will have reservations about spending a lot of money on gas, but good pre-heating should be seen as an investment rather than a cost.

• When unloading chicks, turn off blow heaters as they could cause overheating. Have plenty of help to enable chicks to be tipped as quickly as possible, and tip directly on to feed paper placed around the shed. Chick paper should have about 80g of good quality crumb per chick, and should cover approximately 80% of the floor area. However, don’t place the feed out too early or it will go stale.

• Tap the drinker nipples to ensure that there is a bead of water on every one. These droplets will glimmer in the light, encouraging the chicks to drink. Additives such as electrolytes containing aniseed can be added to the drinking water to give it a pleasant taste.

• Lighting levels should be a minimum of 20 lux at chick height over at least 80% of the floor. Use a lux meter to check this, as low light levels and uneven lighting can lead to chicks being slower to start.

• Humidity in the shed should be between 60% and 70%. Chicks come out of a humid hatchery, and if they are transferred to a dry shed they will dehydrate very rapidly, leading to unevenness and poor growth.

The above points are guidelines only. Every stockman should monitor their birds closely to ensure a good spread of chicks and flock activity. If the birds are poorly spread or inactive then producers must urgently ascertain the cause and correct it immediately. However, any changes should be subtle, so as not to overstress the birds.

Apart from getting a good even start to a flock, it is important to consider the development of one of the bird’s most important organs: the intestine.

Poorly developed intestines and those with relatively high levels of harmful bacteria will be less efficient at absorbing nutrients, leading to poor growth, feed conversion and gut health – as well as wet litter.

High-quality brooding and chick health is the foundation of good intestinal development, but it is also very important to consider where the potential flora of the intestine will come from:

• The shed. No matter how carefully producers clean out at turnaround, there will always be bacteria (both good and bad) left over from the previous crop. Good terminal hygiene will help reduce this problem. Use a suitable detergent at the correct dilution, and always allow surfaces to dry before applying disinfectant and bedding up or stocking the shed.

• The bedding. Quality is important. Wood shavings are ideal, but due to availability issues many farmers are using chopped straw and other products like recycled wood or miscanthus. Always check there are no pieces of foreign material such as glass or metal in bedding and ensure that the bedding is dry before spreading.

• The breeder farm and hatchery. These sources are out of the control of most broiler farmers, but it is useful to ascertain if any particular breeder flocks are known to have chick quality issues. This will help influence the choice of starter medication, which has a major impact on intestinal bacteria. The use of antimicrobials should involve careful discussion with your vet to take into account the parent flocks, the hatchery and the farm history. If antimicrobials are given, they should be followed up with probiotics to fill the void created in the intestine.

• The drinker lines. One of the first things chicks will do after tipping is drink. It is very important that the drinking water is spotless, so drinker lines should be sanitised at turnaround, preferably with a hydrogen peroxide-based sanitiser to remove biofilm – a mucus-like substance made by bacteria to protect themselves.

Water can be a huge source of bacteria and nutrient imbalances, and producers should test their water every six months, both at source and at the end of the drinker line. Adding activated chlorine to the drinking system continuously can help kill any bacteria present.

• General farm biosecurity. It is very important to change foot-dips at least twice a week, and keep them covered from light and rain. Boots should be washed to remove muck prior to dipping, and ideally producers should have separate boots for each shed, to reduce the transfer of disease.

To measure the success of early chick management, producers should check them regularly and monitor flock behaviour. Just 24 hours after placement, 95% of the chicks should have food and water in their crops. This can be identified by selecting 20 chicks each from the front, middle and back of the shed, and feeling their crop at the top of the breastbone – if full, it will feel like dough.

They should then be weighed at seven days old, by selecting at least 100 chicks per 20,000 placed and comparing them to the breed target for weight and consistency.

While the above steps will not necessarily guarantee a good even flock, without them the chances of poor flock performance is greatly increased. A broiler’s life is so short that, if they are behind after the first few days, they will never catch up.

Look out for the second article in the series in July’s Poultry World, covering management of the broiler from seven to 28 days. For more information, contact the St David’s Poultry Team on 01392 872 932 or email richardj@stdavids-poultryteam.co.uk

Tips for managing your birds to ensure their wellbeing