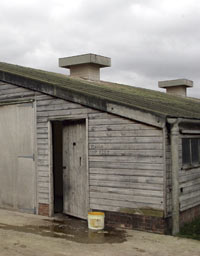 Many rearing sheds in the broiler industry are nearing the end of their working life, according to early results from a new survey.

The survey was prompted by an earlier Savills report on the financial sustainability of the UK broiler growing sector. It concluded that a lack of profitability in recent years had hindered reinvestment.

This prompted the NFU, driven by member and Herefordshire broiler grower Kinsey Hern to survey growers across the country to ascertain the age distribution of broiler sheds in the UK.

Mr Hern said: “At this stage, it looks like that over 60% of the UK industry is operating in buildings over 20 years old, which in many industries would be considered as at the end of their working life”.

The NFU will outline the details in the next issue of Poultry World. But Rob Newbery, NFU chief poultry adviser, said: “We’ve had a phenomenal response from the industry, with around a third of the UK growing capacity included in our report”. A response rate of this kind is almost unheard of.

He added that the survey looks set to highlight where government needs to act to make life easier for poultry farmers. The loss of agricultural buildings tax allowances, delays with the planning process, and stricter environmental controls are all factors hampering the development of a modern efficient industry, which will be so important for our growing population in the next 20 years.