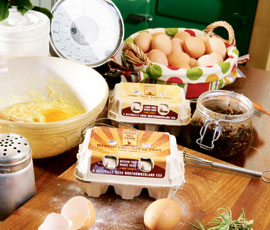 Two sisters who set up a free-range egg enterprise on the family farm six years ago have made the business a resounding success, through sheer hard work and a highly focused marketing and sales campaign. Wendy Short reports

A free-of-charge, post foot-and-mouth business “health check” with a consultant was the catalyst that led sisters, Catherine Armstrong and Christine Young to diversify into free-range egg production.

Their first batch of 16,000 hens was delivered to the 400ha (100 acres) mainly arable Detchant Farm near Belford, Northumberland in 2005, with a second hen house containing a similar number of bird places put up the following year. Today, there are 57,000 birds, with around three-quarters of the eggs produced carrying the Sunny Hill brand. The remainder are sold on the wholesale market.

Marketing has been fundamental to the success of the business. Both sisters studied agri-food marketing to degree level, and marketing was also the study choice of the other two sisters in the family, one of whom – Claire Royle – works for Sunny Hill two days a week, dealing with sales and managing the company newsletter.

The free-range diversification took a leap forward in 2008, when the sisters bought out a local competitor with an established customer base. This increased their capacity by 40% and gave them the confidence to build a packing station, which was installed in the same year.

The unit offers specialist free-range grading, branding and packing services, with the potential to handle more than 12m eggs a year. The move was assisted by grant aid from the government-run Rural Development Programme for England (RDPE). In the same year, they added another 16,000-bird house, which took numbers to their current level.

Mrs Young spent a lot of time researching the market to find out more about free-range egg production and associated marketing. She also worked for six months for Robert and Ethel Chapman of Aberdeenshire firm Farmlay Eggs, an organisation which started out with a business model similar to Sunny Hill. She describes the experience she gained there as “invaluable”.

The bright and colourful packaging for Sunny Hill eggs was designed by Mrs Young’s brother-in-law, Jeremy Royle, who is a trained graphic designer. It has been “tweaked” over the years, but has largely remained unchanged.

“We are lucky to have a designer in the family, because good quality packaging does not come cheap,” she comments. “Over the summer, we plan to commission some additional photography, and revitalise the look of our website.”

Today, Sunny Hill eggs are purchased by some 450 customers, ranging from small corner shops to the large retail chains, including Tesco, Morrisons and Asda. The connection with Asda was set up in 2006, when the sisters made contact with the firm’s regional buyer, who was looking for a supply of local eggs. The first meeting was held that autumn, and the eggs went on sale in 10 stores around six months later.

Sunny Hill also supplies specialist retailers, such as delicatessens and greengrocers. Catering companies offer a third outlet, which includes restaurants, hotels and tourist attractions. The company delivers eggs free of charge six days a week, to outlets all over the north-east, and the business employs 12 full-time and eight part-time staff. 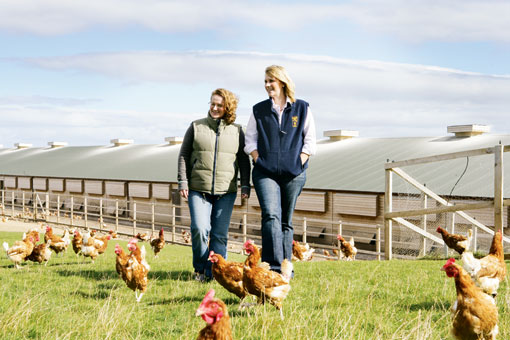 Mrs Young says anyone dealing with supermarket buyers should be aware that they are expected to get involved with product promotion.

“Our business is relatively small-scale, but we regularly work with the supermarkets to try and increase sales. Discounting is one of the most common methods, and we might offer two half-dozen boxes for £2, for example. In most cases, we will bear most of the cost.

“We also put up information boards, to explain the story behind our eggs and how they differ from the competition. Supermarket staff are supportive, but you must show willing and tackle some of the work yourself.”

In response to the economic recession, the business has been looking more closely at the government procurement market, which includes schools, colleges and other council-run organisations. Assisted by her local Business Link adviser, Mrs Young has recently acquired a mentor, who is experienced in securing these valuable contracts. They virtually guarantee payment on time, a factor which benefits cashflow.

Like every other poultry farm, the rise in feed costs has had a detrimental effect on profitability.

“Feed costs have to be met, whatever the market price. We have to be prepared to carry on during the bad times, as well as the good. I believe the oversupply in the UK market will rectify itself over the next 12 months, so I am relatively optimistic.

“There is no doubt that the recession has adversely affected free-range egg consumption – consumers are definitely looking to reduce their spend. The main issue is to offer the public as much choice as possible.”

Mrs Young is adamant that, if they hadn’t developed their own branded eggs, things would have been a lot harder.

“We found we had a product that we could sell, and the market pushed us to expand relatively rapidly. We have had to invest a lot of money into the business, as it was developed from a standing start, but luckily the risk is paying off.

“We have no plans to increase our sales by buying in free-range eggs from other producers,” she adds. “It isn’t something we’d rule out, but at the moment we prefer to concentrate on consolidating our business and encouraging interest in our own product.”

There are currently 57,000 free-range hens at Detchant Farm near Belford, Northumberland, with eggs produced in three flat-bed housing systems and a newer multi-tier unit.

“If we put up any more housing, it will definitely be multi-tier, because the running costs are about 25% lower, they are also easier to empty and cleaning is more straight forward,” says Mrs Young. “However if I was just starting out, I would opt for a flat-bed, as multi-tier systems can be complex to manage, and it takes some skill to keep the number of floor eggs at an acceptable level.

“To a member of the public, the flat-bed probably looks better for the birds, too. But most people with knowledge of the two systems would choose the multi-tier, which allows them to express their natural behaviour more freely.”

Mrs Young says timing is very important when it comes to ranging distances. Birds that are housed in February and March tend to move further away from the shed as, once they are settled in, the lighter nights and warmer weather encourage them to venture outside. Conversely, birds that are housed during the autumn are less willing to range and this continues throughout their lifespan.

Llamas mix freely with the hens at Detchant, and have been observed to “herd” the birds towards the building if they see a fox. Mrs Young believes their presence gives the flock added confidence to roam further away from the housing.

Christine Young was awarded a Nuffield scholarship in 2008, to study free-range egg marketing in the UK and Europe. She concluded that they had become a commodity; a foodstuff which used to be a niche product with a price premium had becomeg a price taker, not a price maker.

Her suggestion was to invest more money in developing an effective marketing programme, with target consumers meticulously researched.

Mrs Young pointed out that some of the younger generation had insufficient knowledge about how to include eggs in their diet. However, she believed that increasing egg consumption across the whole market was the route which would most benefit producers. The overall strategy should be to emphasise the nutritional qualities of eggs and their role in a healthy, balanced diet.

Shelf placement of eggs was also another factor she identified as worthy of more attention. Staple products like milk and bread were often sited in close proximity, and she felt that sales might increase if eggs were placed alongside them. In most cases, eggs were situated alongside dry cooking goods like flour, but this was an area less commonly visited by UK consumers, many of whom were time poor.