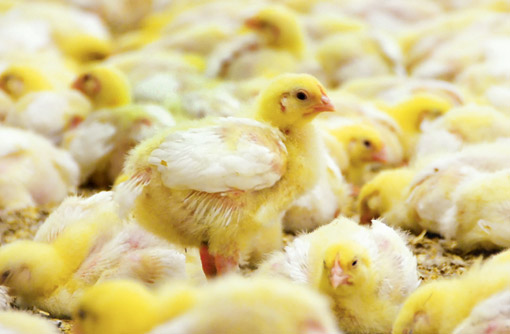 Farmers take great care and devote much attention when brooding young chicks, but often still find that the most challenging time on a broiler unit is when the birds reach 21 days old.

Of course, ensuring chicks are healthy and evenly grown is the foundation stone of any flock – but the real test comes when the birds are between one and four weeks of age. And the most troublesome period seems to be at the three-week stage, when the birds can suffer from enteritis, erratic water consumption and uneven growth.

So why do so many problems occur around the 21-day mark?

About this time, the birds undergo a number of changes, including switching from chick down to feathers; a change in feed specification and coccidiostat; and maturation of intestinal bacteria from those of a young chick to an adult bird.

They also have to endure the stress of vaccination, at a time when maternal antibodies are declining, and build their own immunity to new pathogens that are present.

The transition from chick down to feathers can leave birds poorly insulated until they reach 28 days of age. This means it is crucial for producers to get the temperature and ventilation in the shed right, which can be very difficult if the birds are already uneven from challenging brooding conditions.

It is also important to get the air to the right place in the shed. If vents are shut too tight, air will bypass the birds, leaving the atmosphere pleasant at human height, but rather stuffy at bird height. Conversely, if the vents are open too far, then cold air can be dumped down on the birds, chilling them.

In the case of both temperature and ventilation, producers should use the birds’ behaviour as a guide to their needs. A healthy house of happy broilers should be up and active; large numbers of birds just sitting or huddling together indicates a problem. There is another benefit to having decent ventilation, as it should improve litter quality, which in turn will aid bird health.

At this time, the transition from down to feathers can often allow scratching to occur, as the skin is unprotected. Many flocks show signs of scratching by 21 days old, as the birds scramble on top of each other when surprised, perhaps by a stranger such as a vet, or competing for feed after the lights come on and the feeders run.

To reduce the risk of scratching, producers should walk their flocks in a calm fashion. They should also bear this in mind when top dressing, and always ensure sufficient feeder space so the birds don’t have to fight to eat. Good environmental conditions will also reduce the chances of these wounds becoming infected, which can lead to cellulitis rejects at slaughter. 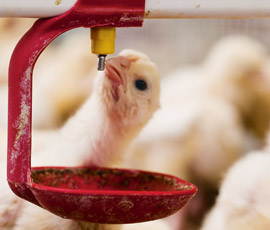 Many birds will experience a change in feed ration throughout the transition phase, moving from a starter ration to grower feed, and then to finisher feed. These changes can upset the birds through differences in nutritional value. Chicks that get off to a good start in life will have better intestinal development, but during the transition stage they will still be challenged.

Variations in the feed – as well as pathogens remaining in the shed from the previous crop – can alter the balance of bacteria in the intestine, opening up an opportunity for harmful bacteria to outweigh beneficial bacteria, leading to dysbacteriosis and wet litter.

A change in coccidiostat at this time may compound the issue. The move from a strong coccidiostat to a weaker one can allow a coccidiosis challenge – albeit a mild one – which can lead to enteritis.

It is important to try not to change the coccidiostat at a time when the birds are under additional stress. However, birds that are well grown, even and have a well-developed intestine with a good population of beneficial bacteria are much better placed to deal with these changes than uneven birds with poor intestinal development.

The use of probiotics early in the crop can help colonise the gut with beneficial bacteria, and the subsequent use of organic acids will maintain their population and support intestinal villus growth.

Between seven and 28 days of age, broilers tend to get at least one Gumboro disease vaccine and, in some instances, an Infectious Bronchitis vaccine. Many farmers will see a change in water consumption and in the birds’ droppings a few days after the Gumboro vaccine and will generally blame the vaccine for causing such a reaction.

But the question is whether it is the vaccine itself or the stress of administering it. Or is it just a coincidence that we are vaccinating birds around this difficult time?

Undoubtedly, administering any vaccine to birds will cause some degree of stress. But it is more likely to be a coincidence that the issues occur a few days after vaccination, as there are often several farms on the same vaccination programme with the same feed and the same chicks, that do not see these issues. Furthermore, in many cases farms that switched to an injectable vaccine at one day old still observe these signs.

When chicks hatch they have a good compliment of antibodies from their mothers, which have been passed on through the egg yolk. This means that a young chick is protected against most diseases until its immune system has had time to fully develop and make antibodies.

By about 14-21 days, the level of maternal antibodies begins to drop to a level that isn’t sufficient to protect against many of the diseases on farm. The chick’s own body must now make antibodies to protect itself, which can be stressful for the bird and can take some of the protein that would otherwise be used for growth – leading to a stalling in performance.

Around this time any diseases remaining on the farm from the previous crop become obvious, and any shortcomings in terminal hygiene are highlighted, as the birds succumb to the various disease challenges.

Clearly, birds that are lame, injured or diseased should be culled – but culling to improve the evenness of the flock should also be considered. It can be a difficult management decision, and will depend on the end market, but in general any birds that are less than half the size of the rest of the flock average, or that can’t easily reach feeders and drinkers, should be culled.

While nobody wants to cull a healthy bird, ineffective culling will lead to more rejects at slaughter. Taking out the small birds, which may be harbouring disease, will improve flock health and make ventilation and temperature management easier through having a more even flock.

Taking seven-day weights into account, farmers should use the 28-day weights as a guide to how successful the transition stage has been. The evenness of the flock is always important, although any unevenness developing at this stage is more likely to be the result of a problem during brooding than poor management. Litter quality will also provide a good indication of flock and intestinal health – it may undergo capping, but should not become wet.

Ultimately, while mortality is generally low in the transition phase, it is easy to lose one to two days of growth, cutting £1,000s off the bottom line.

With producers continually racing to maximise growth rates and bird health, any minor setback can have a ripple effect on productivity. Attention to detail to keep the birds happy and stress-free throughout the brooding and transition stage will set them up for optimum growth and well-being in the final finishing period.