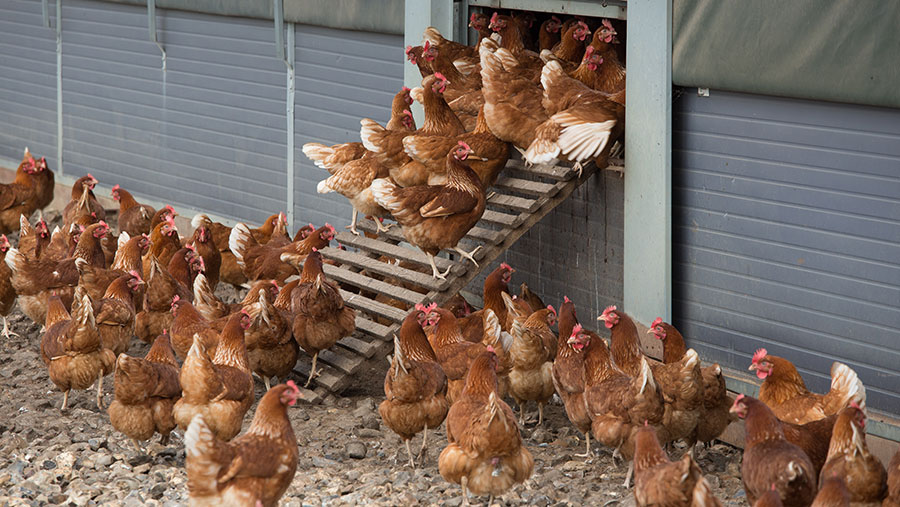 Free-range poultry producers who have been housing their birds due to the risk of avian influenza will be able to let them out again after 28 February, subject to certain conditions.

The new policy (PDF) – which will be confirmed by Defra at the end of the month – has been introduced to overcome the problem of free-range eggs and poultry losing their status once they have been housed for 12 weeks.

That period runs out on 28 February and there have been fears that losing free-range status would lead to loss of earnings for producers and huge logistical problems for the whole supply chain.

Defra’s solution has been to divide the whole of England into risk areas.

Higher risk areas have been identified as those close to substantial inland or coastal bodies of water, where wild birds tend to collect. See Defra’s interactive map.

Producers in these areas will have two options, post-28 February:

Producers who are outside the higher risk areas will be able to let their birds outside into enclosed areas, subject to strict biosecurity conditions. These birds and eggs will be free range.

Chief vet Nigel Gibbens said that the rule changes were being announced now to give people time to prepare. He expected that about 25% of poultry keepers would fall within the higher risk area.

The British Free Range Egg Producers Association said it was relieved that the end of the 12-week housing order was in sight.

But the NFU said it had concerns over the complexity the system would bring to the whole supply chain.

The new policy from Defra has been made necessary following EU agriculture commissioner Phil Hogan’s refusal to grant an extension to the 12-week limit for birds to stay indoors before losing their free-range status.

The new arrangements will stand from 28 February until the end of April, but could be subject to change if there is a more widespread outbreak of the disease.

Meanwhile, Scottish rural secretary Fergus Ewing has confirmed that poultry keepers north of the border will have the option to let their birds outside again from 1 March, subject to enhanced biosecurity.

This would apply to the whole of Scotland, with no zoning or “higher risk” areas.