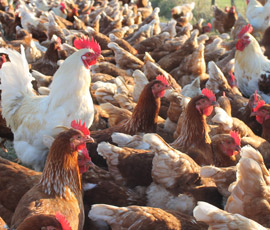 Multiple matings by breeding hens could result in more disease-resistant chicks than from single matings, according to new research from the University of East Anglia.

Researchers studied red junglefowl – the wild ancestor of the domestic chicken – in a collaborative project with the Universities of Oxford, Stockholm and Linköping.

Findings published in the journal Proceedings of the Royal Society B reveal that mating with different males helps females produce offspring that are more resistant to diseases.

This is down to “cryptic female choice” – where an internal mechanism in their reproductive tract favours the sperm from males that are most genetically different to them.

Prof David S Richardson, from UEA’s school of Biological Sciences, said: “Our research has shown that the females don’t need to choose between males to produce the most healthy offspring. Rather by mating with multiple males, they allow their internal choice mechanism to favour the most genetically different sperm.”

The genes in question (Major Histocompatibility Complex) play a key role in detecting and fighting infections. By biasing fertilisation in favour of MHC-dissimilar males, females increase the diversity of MHC within their offspring, providing them with better disease resistance.

The findings could be important for animal breeders, as well as conservation projects, although the research also found that the effect observed in natural matings was lost during artificial insemination.

“This is because the effect appears to require the subconscious female assessment of the male by some cue during actual mating,” said Prof Richardson. “So having correct cues during mating, perhaps the smell of the male, can affect a females’ chances of being fertilised. And the cues from different males may not work equally well on different females.”

The research follows similar work by Oxford and Stockholm Universities in 2011, which showed hens had the ability to eject the sperm of subordinate males in favour of more assertive males.

Got a view on this research? Comment below or visit our Poultry Platform forum area