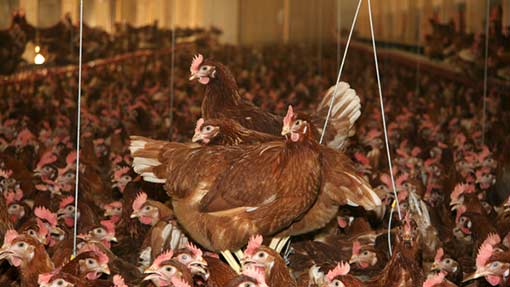 Take 50 birds and visibly score each 0, 1 or 2 based on the quality of their feather cover; award a figure for the neck or head, as well as the back or vent area; observe their general temperament and health.

Well done: you have just replicated the part of an inspection that Freedom Food undertakes to assess feather quality.

Increasingly, farmers are expected to conduct interim assessments of their flocks as part of membership of assurance schemes.

For example, it’s now a written into Freedom Food guidelines that feather cover should be inspected once a month. Some packers also now require a minimum of feather quality.

And with the prospect of a ban on beak trimming from 1 January 2016, feather cover is likely to become an even more important welfare indicator.

To help in this, AssureWel, a five-year project between the Soil Association, the RSPCA and Bristol University which aims to develop more robust inspection procedures, has launched an online benchmarking tool allowing producers to instantly see how their hens’ feather cover stacks up against other farms.

Data from 750 standard free range, as well as organic and barn flocks, taken in the second year of the AssureWel project, is behind the graphs (see Benchmarking panel below).

Whether a Freedom Food producer or not, you can see if your birds fall into the top 25%, the middle 50% or bottom 25% when it comes to feather scores.

Assessing “welfare-based outcomes” is something of a buzzphrase, but it’s simply measuring the effect that inputs, such as pecking blocks or range enrichments have – rather than just their presence in a shed.

“We’re creating a robust evidence base for inspectors to make compliance decisions against standards,” she says.

This created uniform procedure, rather than leaving an inspection to the mood of the assessor or the particular day.

The idea is to identify a problem, whether emerging or established, and adjust management accordingly. “There are many reasons you might have fallen into the red, it’s what you’re doing about it – that’s the main thing.”

Accompanying the benchmarking tool is a range of guides to bird management, including ways injurious pecking might be brought under control.

In the wider industry, the three years’ worth of data that the AssureWel project has so far collected reveals a downward trend in injurious feather pecking.

“We’ve already seen a positive effect,” says Ms Still, adding there’s more awareness at all levels of the supply chain and growing impetus to manage it.

How to use the benchmarking tool

After the assessment of your flock is complete, visit http://tinyurl.com/feathergraph.

The web page should display four graphs and boxes to input the flock age and the number of birds in the sample that scored 0, 1 or 2 on the head/neck or back/vent. Click “Plot Graph” and a cross will appear indicating flock performance against the benchmark (see graph below).

If the cross sits in the red area, immediate action is needed to find the root of the problem. 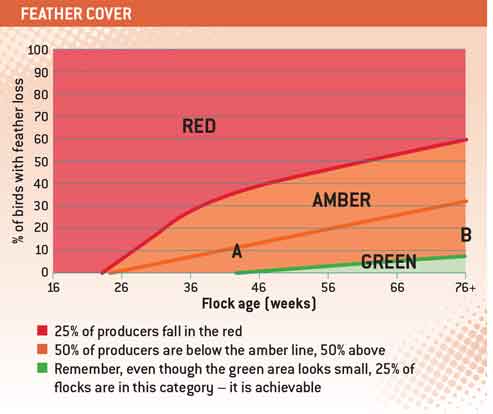