Traditional Norfolk Poultry (TNP) is to become the first business in the world to stun both chickens and turkeys in a new multi-stage carbon dioxide stunning system.

The company believes that Meyn’s multi-stage carbon dioxide stunning system achieves the highest welfare possible by carrying out the stunning process in a controlled chamber.

Birds are stunned in one cycle, which means the drawers don’t have to be de-stacked prior to stunning, which can compromise welfare.

And as the chamber is sealed and computer controlled, it cannot be affected by any local weather conditions. 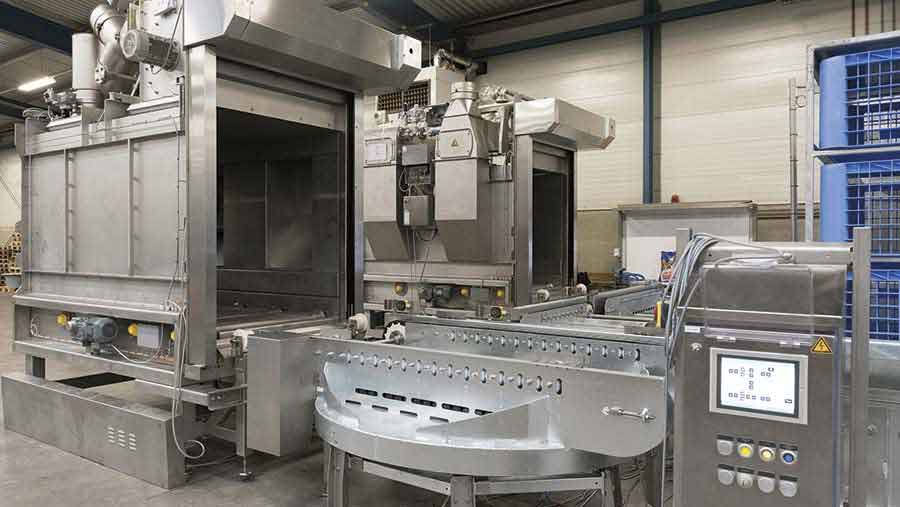 Mark Gorton, TNP joint managing director, visited the new system at Meyn’s Amsterdam headquarters at the beginning of November and was impressed with the facilities.

“For me, it ticked all the boxes – it’s a high-quality piece of equipment which has been very well made and is a real step forward for bird welfare,” he said.

In the past, TNP – as with the overwhelmingly majority of poultry plants – has used the traditional electric water bath stunner.

But Mr Gorton was keen to enhance bird welfare so that during the stunning process he could see no visible signs of distress in the bird, with no gasping or head-shaking and no wing flapping or convulsions.

“Using the electrical stun bath relies on having to catch the live chickens and hang their feet upside down.

“For some time, I’ve been looking for a gas killing system I am comfortable with that delivers the best welfare.”

Mr Gorton said the issue with a lot of available systems that operate on a continuous throughput basis was that, because there has to be an opening at either end of the process, it can be affected by changes in the weather or line speed by the operator.

This means that the system stops working effectively and can create welfare issues for birds because they are not being subjected to the exact same levels of gas that are required to gradually and humanely stun them.

He added that it was an extremely precise science and could only be effectively carried out in a controlled space if the same level of welfare was achieved day in/day out regardless of seasons or weather conditions or the type and condition of the birds being processed.

Under the Meyn system, the carbon dioxide gas is pulsed into the chamber at multiple stages, so that the birds are unaware of what is happening. The gas is even heated before it goes into the chamber so the birds do not notice it.

Upon completion of the stun cycle, the containers are automatically transported, destacked and unloaded.

The gas cycle time from chickens to turkeys can pretty much be swapped over from one species to another at a press of a button.

Among the benefits of the system is the improvement in meat quality and yield. As there is no distress caused during the process there is no blood splash or any haemorrhaging.

The quality of the meat and the yield is massively improved compared to all other systems and conventional electrical system.

Meyn, which sold its first system to Spanish firm Productos Florida in Spain, said the company had found higher yields had been obtained through less trimming loss and fewer B-grade products, as a result of the improved quality of the breast fillet and wings.

It also found that the system considerably enhanced the working conditions of staff as well as improving bird welfare, meeting the ever increasing public and consumer demands.

Mr Gorton said the new system – the first of its kind in the UK – would be arriving in East Anglia in early November for installation and would be ready for the Christmas season. There had been considerable interest and support from suppliers, retailers and RSPCA Assured.

It represents the biggest investment TNP has made. Not only has the company invested in the cost of the equipment, but it has also added to building costs.

“We are building a new lairage at the same time to allow us to increase our throughput to help offset the investment costs. The total extension equates to 35,000sq ft and will also include a new dry good store.

“Basically, it will allow us to double our throughput,” he added.

Other benefits include labour savings at the hang-on bay and improved working conditions for the operators hanging the birds.

Further investment is being put into the installation of a new fully functional crate wash system with dual-stage jet washing and soak tanks to improve biosecurity on live bird modules and to reduce the levels of campylobacter.