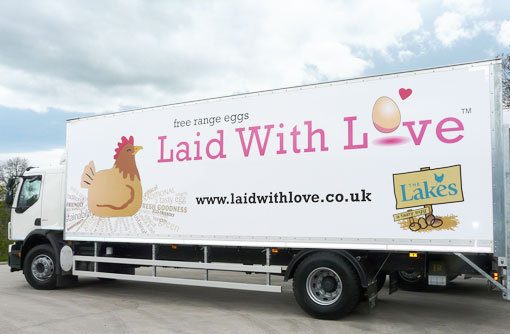 The Lakes Free Range Egg Company has commissioned a new livery for its new lorries to help create awareness and impact for the Laid With Love brand, which was launched in Booths supermarkets last year.

The Volvo lorries arrived at Penrith signwriting company AST Signs to receive their new livery before being despatched to the Stainton packing station. The new look had been kept as a secret from the drivers.

‘”We wanted to surprise our drivers and once they got over the shock, they were quite pleased to have something so unique,” said transport manager Ian Collingwood. “The lorries stay with the driver and we vary their routes on a monthly basis. That way they get to meet more of our producers and see more of our customers’ stores.”

The Laid With Love branded lorries are now travelling around the region delivering eggs to Morrisons stores and Booths depots, before collecting eggs from producers to take back to the packing station.

The Lakes chief execuitve David Brass said “We are getting some very good feedback from the farmers who appreciate our efforts to promote our eggs, and from customers. With increased interest from other retailers, we expect the lorries to be travelling further afield to new retail customers in the very near future.”