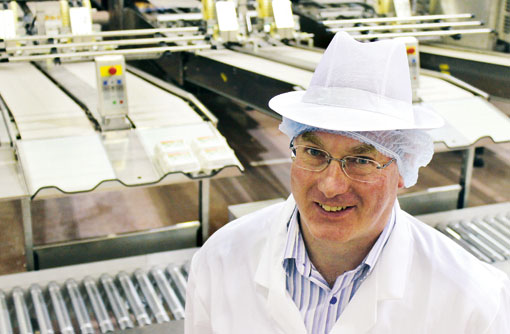 The first eggs have started to roll off the packing lines at Anglia Free Range Eggs in Attleborough, Norfolk. Philip Clarke went to meet the directors

Harry Irwin and Peter Davidson – two of the partners in the country’s newest egg packing business – are clearly men in a hurry.

According to their profiles on the company’s website, if they could change one law, then Mr Irwin says he would “abolish all speed cameras” while Mr Davidson says he would “remove all speed limits, except outside schools and hospitals”.

This enthusiasm for getting from A to B quickly has been evident in their development of Anglia Free Range Eggs, which has gone from “concept” to “fully operational” in less than two years.

Mr Irwin says the initial driver was the 2008 recession. “I was running my own speciality poultrymeat business, but that had reached a plateau as consumer spending was squeezed, so I started looking at ways of diversifying.

“I thought of egg production then, as the free-range sector was doing so well, but to get into the supermarkets you need scale and putting up that number of sheds was too costly for an individual.

“But, as I talked to egg producers in 2009, I got the consistent message that they were fed up with the status quo of supplying just one or two major packers, with limited opportunities to influence the market. And so I came up with an alternative. It felt like I was pushing at an open door.”

With a core of producers on board, the partners then set about finding a suitable facility.

“We considered a new build,” said Mr Irwin. “But this would have taken too long, and we would have signalled our intentions too soon.

“We therefore approached the East of England Development Agency and they guided us to the A11 corridor, where they were looking to encourage business development. They offered us the ideal building – a high-spec frozen food factory in Attleborough that was soon to become vacant.”

The site was perfect, with good road access, ample space for lorries to come and go, ready-made chill rooms and a large, airy interior for a modern packing operation, plus canteen, offices and wash facilities.

Working with local business Poultec, the partners then set about securing grant funding from EEDA towards the cost of the egg packing equipment. “This part of the process has been the slowest and most frustrating, but we got there in the end,” said Mr Irwin.

A £650,000 grant eventually came through in the spring of 2011, providing 40% of the funds needed to purchase the egg packing equipment – a state-of-the-art Moba 170 FT system, capable of processing 170 cases an hour down each of 12 lines.

Total investment in the Attleborough packing centre is put at about £3.5m.

Securing a steady supply of eggs has been the other crucial part of preparing the business.

Initially the partners, plus a couple of other recruits, had 12 sheds of free-range hens between them, equivalent to 192,000 birds. Since then, a further five sheds have been added, bringing total production to 18 sheds, equivalent to about 280,000 birds, once all the notice periods have been worked through.

Timing has been an issue, as committed producers have had to terminate their contracts and restock their sheds, before the packing facility at Attleborough was ready. Fortunately a third party packer stepped in and handled the company’s eggs on a fill-in basis.

Meanwhile, Anglia Free Range Eggs has built up its staffing. Three experienced packers were taken on following the closure of a small Noble Foods facility at Kenninghall in Norfolk, plus one full-time lorry driver.

“We now have a critical mass and the timing is right to start packing,” Mr Irwin told Poultry World. A local retailer has taken the first batches of eggs to come off the line, and the partners are optimistic they will be supplying a major national retailer by the autumn.

“We know we’re a small player, so we are aiming for the top end of the market,” said Mr Irwin.

The business ethos is that the company supplies free-range eggs only. To date, all the suppliers are operating conventional flat-bed systems. But Mr Irvin says this is more by default than design, and the company is not culturally averse to multi-tier.

The other big selling point is that the eggs are local. All feed is sourced within a 50-mile radius of Diss, all eggs are produced in East Anglia and all spent hens are slaughtered within the region. Mr Irwin says that supplying local produce minimises food miles and fulfils customer needs.

“Being free range and local also gives us credibility and helps us guarantee traceability, something that will be vital given the threat of illegal egg imports following the cage ban next year,” said Mr Irwin.

The company is also aiming for transparency, both in its dealings with customers and with its egg suppliers. “For example, we want to have one price for everyone,” said Mr Irwin. Currently Anglia Free Range Eggs is paying its producers a 10% premium over their previous contract price.

Contracted suppliers are all invited to quarterly producer meetings and new members are allocated a “mentor”, to help oversee the transition. There is also an open invitation to visit the packing centre at any time.

Mr Irwin denies challenges from some quarters that setting up a new regional packing centre is somehow fragmenting and therefore weakening the supply chain. “We are still pretty niche and do not have the scale for any supermarket to use us as a club with which to beat the other packers.”

He is also optimistic the business will grow. Current production is put at 400,000 eggs a week, but projections are for 1.6m eggs a week in 12 months time, based on the number of committed producers in the pipeline, he claims.

“A lot of the people who have joined us so far have done so because they know us,” he said. “But it is also because they share our philosophy, are fed up with the status quo and want to be in control of their own destiny.”