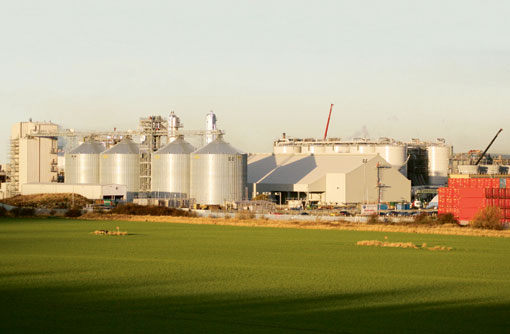 The use of new feed ingedients in turkey diets, the success of the German turkey sector and a new disease threat in the US were all on the agenda at the recent Turkey Science and Production Conference. Ken Randall reports.

New raw materials for turkey diets are gaining in popularity with the increasing cost of traditional ingredients such as maize, wheat and soya, according to Anne-Marie Debicki-Garnier from Danisco.

“Environmental changes in some parts of the world, coupled with the increasing demand for biofuels, has raised corn and wheat prices and consequently the cost of poultry production,” Dr Debicki-Garnier told the recent Turkey Science and Production Conference.

Foremost among these ingredients was dried distiller grains with solubles (DDGS), the by-product from bioethanol production from corn, barley or wheat.

However, use of these ingredients in poultry diets was still limited due to the high fibre levels, she said.

Compared to wheat, DDGS was also rich in protein and fibre, but with a big variation in nutrient composition. Metabolisable energy could vary from around 7.25MJ/kg of dry matter, to 10.5MJ/kg.

Among the amino acids, lysine content was highly variable and depended on the drying process which affected its digestibility.

“Considering the potential significance of this raw material in the future, developing suitable enzymes to allow higher inclusion rates of these ingredients is of great importance.”

Other raw materials that showed potential were rapeseed meal as an alternative to soya; and barley instead of wheat.

Rapeseed meal was starting to be used in turkey rations, but its value was reduced by high levels of phytate, and there was potential to use enzymes to solve this problem.

In the case of barley, this could be partially used in combination with wheat if the cost per energy unit was favourable.

The enzyme xylanase could be used alone or in combination to reduce the cost of the feed while maintaining performance.

German turkey production has increased by 130% since 1990, at a time when the industries in France, Italy and the UK have all declined and the success is due to taking a wholly different approach, Ewald Drebing of processor Moorgut Kartzfehn von Kameke told the conference.

Compared with other countries, the German market historically had a relatively small domestic demand for whole birds. Instead a high proportion of turkey parts was already being processed as the industry started to expand.

“Turkey played an increasingly important role as a raw material in sausage production because of the nutritional advantages over products made from pork,” said Mr Drebing. “Owing to the high degree of processing and the wide range of products, turkey products achieved a privileged position in the domestic market,” he explained.

At the same time, producers came to regard themselves as meat suppliers rather than suppliers of poultry. The white meat was offered as turkey parts at an early stage, and competed directly with red meat.

Turkey growing traditionally occurred on family farms, he said, and only 20% of the production was integrated. At the same time the industry was based on the principle of competition, according to the “4-pillar” concept of the way the German industry was structured.

“Under this scheme, the four key industry participants – hatcheries, producers, feed mills and processors – are generally independent and must be competitive. This process increases efficiency.”

This focus on market requirements alongside the “performance-enhancing competition at all production levels” had given the industry great stability over recent decades, he said.

“The development of the market from 2000 until today means that products made in Germany are not only able to withstand import pressure, but have been increasingly exported over the past 10 years.” 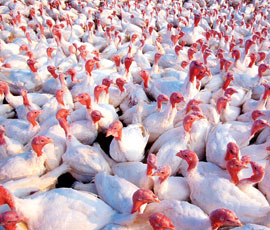 Severe outbreaks of gangrenous dermatitis in turkeys in the US could show similarities with the incidence of C difficile in humans, a problem which was “bad and getting worse,” according to Don Wilson from Anitox Corp in the US.

“This may indicate why we are seeing severe outbreaks of the disease in turkeys now, but did not just a few years ago,” he said.

Gangrenous dermatitis was caused by Clostridium septicum, a species closely related to C difficile, which was primarily a pathogen of humans, and the two were capable of transferring gene mutations, explained Dr Wilson.

“An alarming development is that a recently identified strain of C difficile in humans produces 16 times more toxin A and 23 times more toxin B than other strains, which is linked to a gene mutation.

“These findings of increased virulence associated with gene mutations may indicate that antibiotic resistance and hypervirulence are closely linked.”