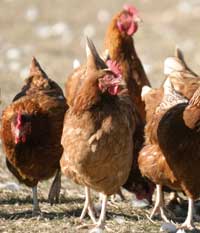 The NFU has expressed its deep disappointment after a farm and abattoir looking to meet strict animal welfare and food hygiene regulations lost its planning appeal.

Summers Poultry Products at Cank Farm, Tanworth-in-Arden, sought to overturn a Stratford-on-Avon District Council decision against development at the site, but on 9 February 2011 an inspector dismissed the appeal.

The poultry business had appealed to the secretary of state for communities and local government after the local authority refused planning permission for a slaughterhouse extension and other alterations in the Green Belt.

Farmer and NFU member John Summers said the chiller unit and holding pen area were built to meet strict DEFRA and Food Standards Agency regulations. He said the buildings were essential otherwise they would be forced to shut down the abattoir and 96 people would face losing their jobs.

“Government makes supportive statements about the planning system supporting business, but unfortunately this does not always translate at a local level,” she said.

“The NFU understands the importance of the Green Belt, however, the business is established and sought to make minor changes to an existing building to meet regulatory requirements for animal welfare.”

The NFU understands that the company, which processes about 100,000 chickens a week, spends £6.5m in the rural economy, using contractors and suppliers. The family has been farming at Tanworth-in-Arden for generations and the abattoir has been operating since 1967.

In his report, the inspector said he accepted the proposed extensions would enable the slaughterhouse to meet current regulations for the foreseeable future, preserve jobs, maintain existing trade with local businesses and prevent disruption and expense to local and more distant poultry suppliers.

But he seemed to doubt Summers Poultry Products claim that 96 jobs were at stake. The inspector said he had heard that the existing slaughterhouse provided employment for some “20 village residents and 12 people from the surrounding area”. If the business closed, “the impact upon local employment would therefore be relatively limited,” he said.

In conclusion, the inspector said he felt the development was industrial and the reasons to allow it did not “tip the balance in favour of the proposal” or “clearly outweigh the substantial harm by reason of inappropriateness”.

A few weeks ago, Stratford District Council’s audit and regulatory committee agreed to take direct action and demolish the two buildings should the scheme be dismissed at appeal.

• The NFU points out that, in the forward to the White Paper Local Growth: realising every place’s potential, deputy prime minister Nick Clegg makes clear the first priority of the government “is to return the nation’s economy to health”. This includes creating “the conditions that will help business and get the economy growing”. Planning is considered as one of the mechanisms that will help deliver this economic health.