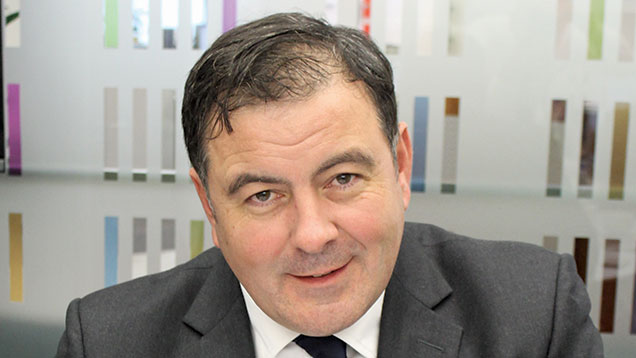 Twelve months ago, Andrew Cracknell joined Noble Foods after 20 years in the red meat industry. Here are his thoughts.

On the outlook for the egg industry in 2015

“I am optimistic. Demand remains strong for our products and lower feed prices are a welcome situation.

“In early January there was another round of price reductions at retail level which have reduced colony egg prices to about 55p/pack.

“I think that when that price differential below free range is re-established to the 40-50p mark, you could potentially see people swing back into colony. So we need to watch the supply and demand as we go in to summer.

“As free-range discounting tightened up the market last year, cuts to colony could send us into an oversupply situation towards the summer.”

“These boom and bust cycles can be damaging for the industry and Noble in particular. Contracts, designed around costs of inputs, could give producers and retailers greater degrees of certainty and reduce risk around commodity pricing.” Andrew Cracknell, Noble Foods chief executive

On the difference between red meat, dairy and egg contracts

“I think there’s a lot of room to develop the way the entire supply chain works. While livestock markets publish weekly prices, they are regional and do not state bonuses or deductions.

“When you look at the egg industry, each individual producer has his own contract; that gives an assurance and confidence that the meat industry doesn’t have. You can be buying store cattle and not know what they will be sold at. In the egg industry there’s a lot more certainty around pricing.

Could you ever see feed-ratchet-type agreements for free-range farmers taking off?

“It would have to tie in with a dedicated supply line into a nominated retailer, but yes. It’s more than hypothetical, but not yet in the pipeline. Clearly, we have a number of retail contracts already established.

“Historically the price of eggs has been tied to the supply of eggs rather than the cost of feed. If we can tighten up the supply chain with longer-term relationships, and providing a customer’s market has a degree of throughput certainty, we could see those types of contracts coming down the pipeline more quickly.”

“That said, I do think there’s a lot of room to develop the way the entire supply chain works.

“We like to pride our industry on being efficient and operating at the highest levels of animal welfare. I think that banning beak treatment would absolutely fly in the face what good egg producers strive towards.” Andrew Cracknell, chief executive Nobel Foods

“The milk situation has been to the forefront of people’s minds recently. Those on retail contracts lost out when prices peaked last year. Subsequently, as the milk price has fallen, they have fared very well. It is a less volatile system and something we are encouraged to investigate.

“More generally, the whole retail trade is looking to align with cost of production, and the egg industry, because of its structure, is a lot more suited to do that.

“So I think the current model can be refined and developed; that there’s room for improvement. In 2012, when commodity prices rocketed and the cost of production went up, the pressure on retailers to put prices up was considerable. They have long memories, and as feed comes back it should work both ways.

“These boom and bust cycles can be damaging for the industry and Noble in particular. Contracts, designed around costs of inputs, could give producers and retailers greater degrees of certainty and reduce risk around commodity pricing.”

On the prospects of a beak-trim ban

“Were a ban to be enforced, it would structurally change the way our industry is operated. It would make it a far more expensive supply chain to manage, and one that was less welfare-friendly.

“We like to pride our industry on being efficient and operating at the highest levels of animal welfare. I think that banning beak treatment would absolutely fly in the face what good egg producers strive towards.”

Would free range in its current form remain commercially viable?

“We’re pre-judging the evidence here, and the outcome. But assuming 10-15% mortality, would that be acceptable? Would we have to reassess the number of birds housed?

“If that were to reduce we wouldn’t haven the capacity to maintain sales, so there would be a natural readjustment. It would be hugely disruptive. With the current structure of the free-range egg industry, you would be looking at a considerable increase in the cost of production.

“Beak trimming is, of course, something we’d rather not have to do. However, at the current time we do not believe that we have breeds of hens which we can safely manage without beak trimming.

“The Bristol University research on untrimmed flocks is not yet completed, but we have already seen some well-publicised instances of problems in the untrimmed flocks which are a real animal welfare problem, vastly worse than the trimming itself.”